The Force Awakens In NYC

While the “Star Wars and the Power of Costume: The Exhibition” debuted in Seattle earlier this year, the exhibit featuring garb from Star Wars: The Force Awakens due out on Friday, Dec. 18 is an exclusive display that will only appear at Discovery Times Square in New York. Wardrobes of Finn, Poe Dameron, Rey (pictured, right) and the revamped Empire collective, The First Order are a must-see at the gala.

Finn’s outfit is reminiscent of clothing worn by Han Solo, while Rey’s bears a striking resemblance to that of Luke Skywalker’s on Tatooine in the first film. The X-Wing flight suit worn by Dameron seems more sleek in design compared to its 1970s counterpart, but undoubtedly pays tribute to the success of Star Wars.

While the Star Wars costumes give attendees at “Star Wars and the Power of Costume: The Exhibition” much to comb through, here are popular stops you must make when venturing to Discovery Times Square.

Stormtroopers Everywhere
This display hearkens back to a scene from Star Wars where Han Solo runs down a few stormtroopers into a trooper-filled hall. The room showcases one stormtrooper costume from Return of the Jedi and helmets in a room surrounded by mirrors. It’s jarring, but in an awesome sense of the term. 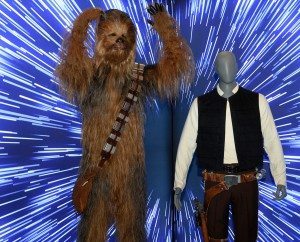 Attached at the hip throughout the franchise, Han Solo and his best friend Chewbacca, are one of the linchpins of the exhibit. The Chewbacca costume was used in the first three films while Solo’s hails from Return of the Jedi.

Scenes Around The Star Wars Exhibit 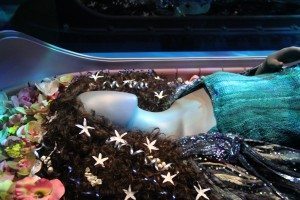 A Funeral For A Queen

The Star Wars exhibit showcases a memorial to Queen Padmé Amidala, who’s death at childbirth of Luke Skywalker and Leia Organa in Star Wars: Revenge of the Sith preceded her funeral procession on the planet Naboo. 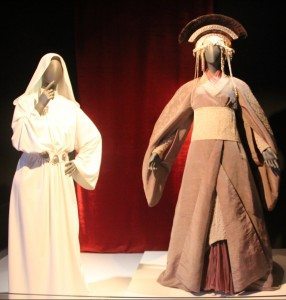 The Mother And Daughter

The Skywalker Family is placed prominently with a gown worn by Amidala next to Organa. Luke and Anakin Skywalker face away from each other, suggesting each is on a different path.

For more about “Star Wars and the Power of Costume: The Exhibition,” click here.