It’s All In The Costume

Try to imagine Luke Skywalker without his Jedi robes. Create a mental picture of Darth Vader sans the black imposing uniform. You can’t. These items, although small in scale, loom large over the Star Wars saga and breathe life into the films.

While some may say the lightsabers brandished across the Star Wars films are what drives the tale, “Star Wars and the Power of Costume: The Exhibition” at Discovery Times Square offers a detailed look at how the costumes helped mold some of the most enduring leading ladies and men of the last four decades.

While the Star Wars saga can be traced back to the mind of director George Lucas, the drawings of concept artist Ralph McQuarrie gave first life to what we know today in the realm of the galaxy far, far away. The exhibit ends on Sept. 16, 2016.

“Costumes are extremely important in telling a story, a character,” Lucas said in an opening video that exhibit attendees view before entering. “You’re defining a culture in making things realistic.”

The 70 costumes on display contrast at times, showcasing costumes from different films right next to each other. This is evident at the outset of the exhibit when Obi Wan Kenobi’s garb from Star Wars worn by Alec Guinness is nestled up next to an elaborate red gown showcased by Natalie Portman as Queen Padmé Amidala’s in Star Wars: The Phantom Menace.

“The reason for this grouping is it symbolizes the contrast between the first two sets of films,” Discovery Times Square Senior Press Director Teresa Brady said. “In the prequels, it was still an opulent time. It was before the Emperor took over. When you look at Obi Wan’s costume, it symbolizes the turmoil, the rebellion.”

Each gallery tells its own story. Curatorial panels, both digital and text-driven at each of the displays, give the obsessed fans more info nuggets to feast on, while the general audience gets new, useful knowledge of the franchise they adore.

“It goes back to the detail,” Brady said. “A lot of these costumes you only saw briefly in the films, but the love and care are clearly there.”

Curators displayed patches of the outfits for exhibit-goers to feel, offering a glimpse of what the icons felt like. The show is the brainchild of the Smithsonian Institution Traveling Exhibition Service (SITES) along with the Lucas Museum of Narrative Art and Lucasfilm.

“We want the fans to study the detail,” SITES Exhibitions Project Director Saul Sopoci Drake said. “Sometimes you don’t get that up close and personal viewing of the costumes on screen. This gives a rare glimpse for costumers themselves to really study and make notes to add to their own costumes.”

The Smithsonian created the informational content for the exhibit, Sopoci Drake said, and grouped the costumes in a way that highlighted the wardrobe’s value along with how the clothing shaped actors donning them.

“We’re really interested in taking a deep dive into the subject matter,” he said. “We take an analytical approach to a popular genre. We had a lot of blackish or darker text panels. Within those we had curators talking about the influences on George Lucas when thinking about the costume.”

With Vader, you have a prime example of how costumes exude the essence of a character, from the intimidating black helmet to his signature breathing pattern.

“You don’t need to hear him talk or breathe to realize that Vader is a bad guy,” Sopoci Drake said. “Looking at the costumes and some of the craftsmanship they had, you see how people took Lucas’ vision and made it a reality.”

A wide display of costumes featuring Emperor Palpatine dubbed “Devolving Palpatine” showcase his transformation from a wicked chancellor to the devilish leader of the Galactic Empire; symmetry at its peak.

“We start the [Palpatine] exhibit with Phantom Menace, but as he progresses and evolves into the emperor, you see how he crouches down and gets maniacal,” Brady said. 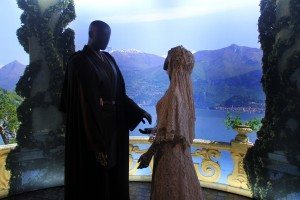 The exhibit even showcases the familial crux of the franchises. The white costume made famous by Carrie Fisher’s Princess Leia in Star Wars is coupled with a gown worn by Amidala, her mother in the franchise prequel. Luke Skywalker’s Jedi robes from Return of the Jedi stand nearly back-to-back with regalia donned by his father, Anakin, in Menace.

Elaborate gowns made for Amidala generate subtext from its fabric to stitches, showcasing a life of leadership and formality. The fashion for Leia exudes the wartime era that she faced as a native of the doomed planet, Alderaan.

“We recognize Stars Wars and its impact on popular culture and fans worldwide but we wanted to dig a little bit deeper and tell a different story than what you’d normally think of with Star Wars,” Sopoci Drake said.

Read more about the “Star Wars and the Power of Costume: The Exhibition” here.

See below for additional photos from the exhibit: