In the United Kingdom, magpies are a part of superstitious lore that says if a person spots these highly intelligent birds, you should give a salute while saying ‘Good mornin’ Captain’ as a way of warding off negativity. And given that this species is a subset of the crow family, it’s not surprising that Black Crowes founding member and guitarist Rich Robinson would embrace this notion when it comes to his new 10-piece project aptly named The Magpie Salute. This project was formulated in the middle of a busy 2016 that found Robinson touring to support a new record (Flux) and the reissue of his entire solo catalog, in addition to serving a stint subbing in for Mick Ralphs of Bad Company.

“I was on tour last year for Flux and there was an opportunity to do a show at Woodstock for this thing called Woodstock Sessions, where they invite a live audience in to watch you cut a record. That being said, I wanted to do something different. I invited some friends and I decided to call Marc Ford and Eddie Harsch. Marc said he’d be there and Eddie was the same way. He said he was coming and that it would be excellent,” Robinson recalled. “It was going to be a one-off thing and we did 76 songs over those three days. But those guys only played on about 25 of them and that was going to be it. We came in, it was done and then we left. That was pretty much it. But as we were leaving, we realized how special it was and that it was something more than we had hoped. As I was continuing on my tour, I started trying to figure out what we could call it and what kind of songs could we play—how many Crowes songs would we play and what would this be? When we continued on our way and I was finishing my tour in Texas, I came up with this concept. I talked to everyone about it and everyone was excited about it and everyone was really cool. The next step was trying to figure out what to call it, and I wanted to stay within the Crowes realm.”

For Robinson, the idea of naming his group after a magpie led to tie-ins to his former group on a number of different levels.

“I always liked the word magpie and how crows have these incredible mystical connotations and a lot of it tends to be dark. But they are brilliant birds and beautiful and symbolically cool. But one thing I liked about the magpie was that it really encompassed both the light and the dark. I thought it was a cousin of the crow and there are some really cool elements to it that I thought it would fit. For the first time, I got to choose what I wanted to be a part of,” he said. “As I was researching it, I saw that people in the UK use the term ‘magpie salute’ to say, ‘I’m unarmed and come in peace.’ One way people salute magpies in the UK is to say, ‘Good morning captain,’ which is a [Black] Crowes song. I thought all these things pointed us into this direction. I thought it was really kind of obvious and and then we put up these shows for sale in January and they sold out in 20 minutes. We kept rolling—the first through the third shows sold out. I thought there was a definite interest and that was a really cool thing. So then I thought what it might be like if we booked a tour. While we’re talking about all of this, I remembered that we made a record last year with everyone but [vocalist] John [Hogg]. I had John overdub his vocals on some things and that’s basically how it happened.” 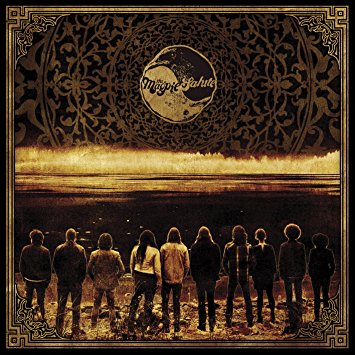 Along with Robinson, Magpie Salute is seemingly a reunion for Black Crowes alumni, including guitarist Marc Ford, bassist Sven Pipien and late keyboardist Eddie Harsch, who passed away just before the band played its inaugural New York City shows late last year. Rounding out the lineup are vocalist Hogg, keyboardist Matt Slocum, drummer Joe Magistro, guitarist Nico Bereciartua and a trio of background vocalists (Charity White, Adrien Reju, Katrine Ottosen). Aside from “Omission,” a previously unfinished cut that Robinson had cut a scratch version with Magistro and finished up with the rest of the band after the fact, the members of Magpie Salute cast a wide net the covers they chose to go with for this self-titled live record. Among the artists who get their due are The Faces (“Glad and Sorry”), War (“War Drums”), jazz vibraphonist Bobby Hutcherson (“Goin’ Down South”), Delaney and Bonnie (“Comin’ Home”), Bob Marley (“Time Will Tell”) and Pink Floyd (“Fearless”). Concert-goers can expect to hear sets that are half Black Crowes songs and the remainder being drawn from the Robinson and Ford catalogs, along with a healthy serving of covers.

In the liner notes of the album, Robinson writes, “The Magpie Salute, and this record in particular, is about honoring the past. Honoring what we all have accomplished musically. Honoring our friendships, but perhaps more importantly building towards making a new record with all-new original material. It’s about where this will go from here.” Not unlike their peers in the Tedeschi-Trucks Band, The Magpie Salute has enough musical moving parts to make this kind of endeavor quite a challenge. But for Robinson, it’s something that’s gone quite smoothly, given the players involved.

“A 10-piece band can be the best thing in the world or a nightmare. Everyone’s tendency when you’re young is to overplay and fill every hole possible. But when you have these great musicians like we have, everyone is a good enough musician and sympathetic enough to the cause to really honor the song,” Robinson explained. “Because that’s all we’re really doing—we’re honoring these songs, be they Black Crowes songs or my songs. That was really our goal ultimately. So everyone is really a good enough musician to focus on that and when it’s done properly, it’s amazing. The sound can be so amazing and cool. I’m just happy with all of it.”

Magpie Salute will be appearing on Aug. 13 at The Paramount, 370 New York Ave. Huntington. For more information, visit www.theparamountny.com or call 631-673-7300.