For more than 147 years, the Garden City Hotel has continuously delivered exceptional service and style. It’s a landmark and an iconic retreat beloved for its timeless elegance, modern-day comfort, its hospitality and of course, first-class culinary offerings. 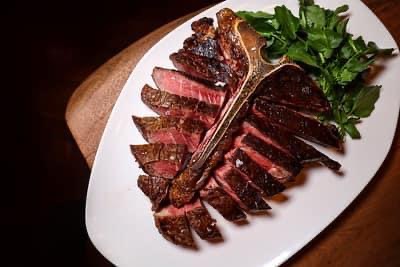 “Himalayan salt is the inspiration for the Red Salt Room,” Burke said. “I have a patent on dry-aging meat with red salt. We thought it was more a current name tied into the patent and also very sexy as a decor element.”

“The hotel has always been a glamorous and high-end place for weddings,” Burke said.
He is happy that the Garden City Hotel invited him in to anchor their dining.

“They do things correctly there,” Burke added. “When you have a hotel with that much tradition they do it right; they have the resources and I am very impressed by the organization. Red Salt Room is an American restaurant masquerading as a steakhouse in a grand old hotel, the best hotel on Long Island because we offer much more than just steak. It has a modern and artistic feel to it, both in the dining room and in the food.”

The menu at Red Salt Room is seasonally driven. Burke hinted that bison and roast duck are possibilities in the next version of the menu, including fresh fall vegetables (butternut squash, mushrooms, Brussels sprouts).

“We’ll be adding a lobster bisque on the menu, maybe a risotto,” Burke said. “We’re very lucky to be on Long Island and close to New York City. We get as much fish as we can locally.”

Other ingredients sourced locally come from Connecticut, New Jersey and Pennsylvania. Burke says the menu only changes approximately 45 percent each season. Many things like the steaks and desserts have a permanent place on the menu.

“We’re adrenaline junkies; we want to bring on a new season,” Burke said. “We embrace that and show off a little bit and get creative.”

He said a lot of his famed chefs come to work for him for exactly that reason.

“A lot of the cooks that come to work for us want that; they come to learn,” Burke said. The newest executive chef, Anup Patwal took over the operations at Red Salt Room in June.
“Anup came out of the Palace Hotel in New York and is doing a great job,” Burke said. “He has a good palate and creativity; he’s got a great sense of spices and I am excited to work on the new menu with him.”

Burke is also working on opening a new restaurant in Morristown, NJ, in addition to reopening two of his Manhattan venues that had been closed due to the pandemic, David Burke Tavern and Mister French NYC. Burke has restaurants upstate, in New Jersey, Colorado, North Carolina and one in Saudi Arabia.

Burke is a graduate of the Culinary Institute of America and ranks among the world’s most accomplished chefs and restaurateurs. His 35-year career is decorated with honors that pay homage to his culinary skill, creative whimsy and philanthropic commitment. He has appeared on Top Chef Masters, been inducted into the “Who’s Who of Food and Beverage in America” at the James Beard Foundation.

Red Salt Room is open Wednesday through Saturday and is located inside the Garden City Hotel at 45 7th St. in Garden City. Visit www.gardencityhotel.com to learn more.