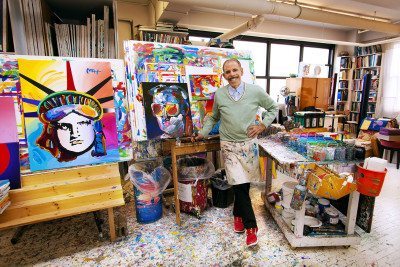 Arguably one of the most prolific pop artists going today, Peter Max has the kind of career that would have been considered legendary had he hung up his brushes 40 years ago. But instead, this 78-year-old illustrator and graphic artist has continued churning out commissioned work at a clip that would exhaust artists a third his age.

In the past two decades alone, the German native has applied his talents to the fuselage of a Boeing 777, painted Ringo Starr’s Baldwin piano to raise money for MusicCares, and created an installation called “44 Obamas” that he made to commemorate the inauguration of the 44th president of the United States. Seated in the conference room of his sprawling 40,000-square foot studio/atelier adjacent to Lincoln Center where he comes to ply his craft every day, Max is modest about his accomplishments and muses.

“Painting is like breathing for me. I love it,” he said with a smile. “I love color, so wherever I was, there were always art teachers and art schools. It’s something I’ve had around me my whole life.” 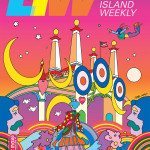 Shortly after being born in Berlin, Max’s parents fled with their only child to Shanghai, living there for a decade. Following subsequent stops in Israel and Paris, the Maxes eventually settled in Bensonhurst, Brooklyn, where the youngest Max wound up attending Lafayette High School. And while his parents were not artists, they were enthusiastic and encouraged their son to indulge his creative tendencies.

“While my parents were not artists, they were artistic,” Max explained. “My mother was constantly putting out materials for me to paint with. So I was around art, drawing all the time and playing with colors, palettes and spectrums.”

And while Max’s early work centered on book cover illustrations and graphic design work he created while working with art school friend Tom Daly in a small Manhattan art studio in the early 1960s, it was the German ex-pat’s use of those aforementioned artistic elements in a psychedelic, pop-art manner that found art critics labeling him as “The visual arts counterpart to the music of The Beatles.”

And while the style from that particular Max era found him creating the stage design for the first Woodstock festival and the two that followed decades later (event founder/promoter Michael Lang is an old friend), Max was not responsible for the look of the 1968 Beatles film Yellow Submarine. (It was the late Heinz Edelmann, who sometimes referred to himself as “the German Peter Max.”) 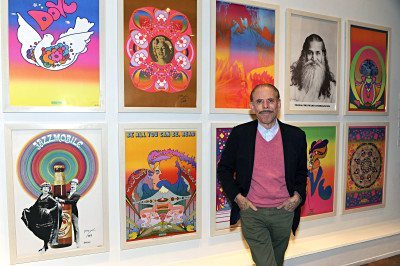 Max’s love of music, astronomy and the United States of America has been a major inspiration behind his commissioned work, whether it’s the portraits he’s done of seven presidents, multiple renditions of the Statue of Liberty, or being the official artist for numerous events including the Grammy Awards, the Kentucky Derby, the Super Bowl, the NHL All-Star Weekend, the World Series, the U.S. Open and the New York City Marathon. And while the size of objects he’s painted range from postage stamps and magazine covers to the hull of a Norwegian Cruise Line ship, it’s all part of the process of moving forward for Max and seeing where his art takes him.

“I’ve constantly changed, and I’ve always been creative,” he explained. “It’s not so much the moment that I evolved as much as looking back and seeing how [my path] has changed.”

Peter Max will be featured in the Peter Max Gallery Shows on June 25 and June 26 at LaMantia Gallery located on 127 Main St. in Northport. RSVP required: 631-754-8414 or James@lamantiagallery.com.

Click here for examples of Peter Max’s most notable works