Pepperheads Unite: Hot In the City 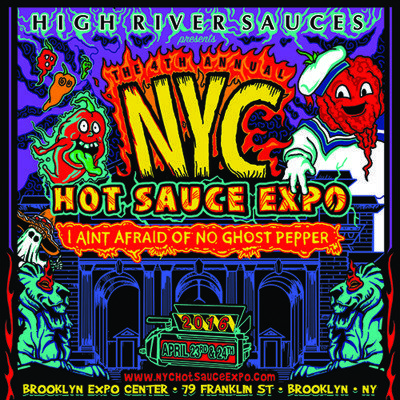 These fiery monikers and others alike will act like a siren song from hell this month, calling the Scoville unit united to the fourth annual NYC Hot Sauce Expo in Brooklyn April 23 and 24. Eyes will water, taste buds will burn and sweat will build as hotheads sample, scream in pain and beg for a shot of inferno-soothing milk.

The expo, held at the Brooklyn Expo Center, 79 Franklin St., will feature eating contests, Hot Sauce Hall of Fame induction ceremonies, awards presentations and much more. Capsaicin-obsessed attendees will get the chance to sample many scorching brands far too extreme for the local grocery store.

The event is presented by High River Sauces and its founder, music industry veteran and food junkie Steve Seabury and will feature close to 50 of the country’s most intense hot sauce purveyors. Visit www.nychotsauceexpo.com for more information.

But the expo is not only for risk-taking pepper heads, it’s also for the health conscious. According to www.hotsauce101.com, eating chili peppers and its active ingredient capsaicin benefit the body in many ways, including showing anti-inflammatory and antioxidant properties, while also helping to battle depression by encouraging the brain to release endorphins during consumption.

And amazingly, capsaicin has even demonstrated cancer-fighting properties, according to David Popovich, a senior lecturer at Massey University in New Zealand. According to Popovich’s research, putting capsaicin on cancer cells reduces growth and kills the cells, recycling them into new cells.

Quite the accomplishment for something called Butt Pucker.

The Hot Sauce Hall of Fame Foundation will induct five spicy individuals into its Class of 2016 at the NYC Hot Sauce Expo.