What the world needs now can be found at Publicans in Manhasset.

We met up with Publicans’ bar manager, Harrison Chedd, to talk about one of the popular items on the cocktail menu. The Smoke Show cocktail draws guests in for a soothing and almost medicinal experience.

“In a classic Penicillin cocktail, peaty scotch is the base of the cocktail, along with ginger, honey, lemon and a smoky scotch floated on top so you get the highlands and the lowlands,” Chedd said. “Publicans’ Smoke Show cocktail is my homage to the Penicillin; we use rye whiskey as the base and mezcal as the float.”

The use of scotch whiskey in this creation showcases how scotch can be used in cocktails, and not just neat or on the rocks.

Peated scotch is a subcategory of whiskey that seduces the nostrils and appeals to the senses with its intense, smoky flavor, imparted by the use of peat soil in the germination process of the barley.

Rye whiskey is similar to bourbon, but tends to be more fruity or spicy than a bourbon, which is noticeably sweeter and fuller bodied.

Mezcal is a distilled alcohol made from the agave plant found in Oaxaca, Mexico. It has a strong smoky flavor. 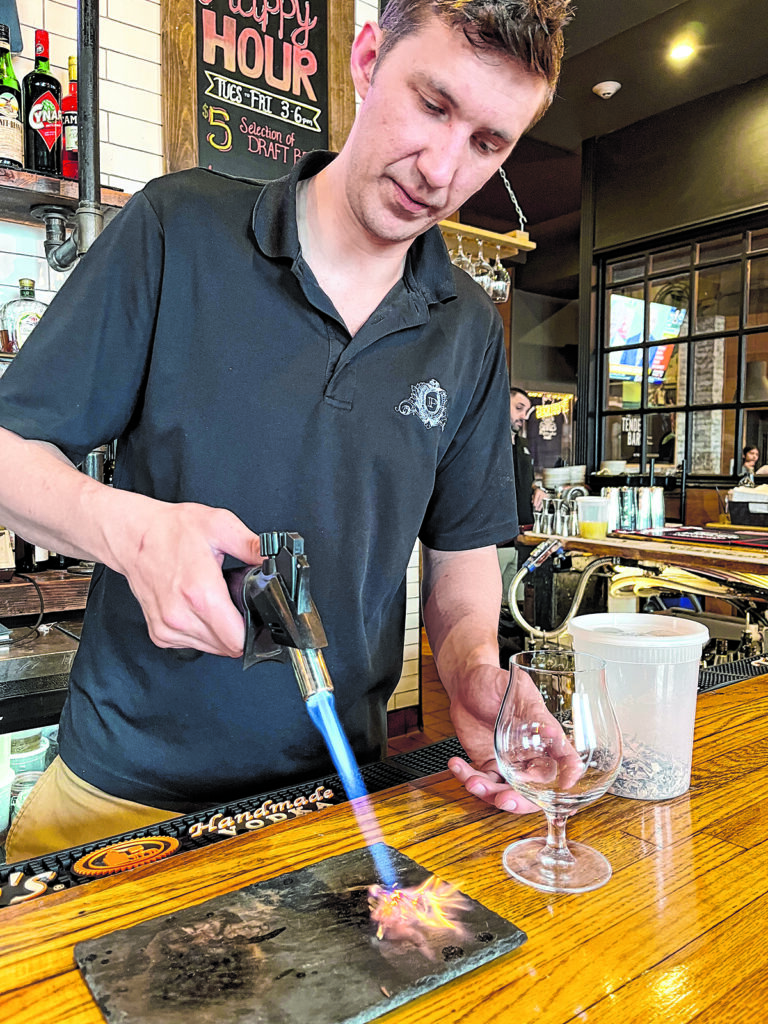 Chedd first sets a pinch of cherry wood chips on fire and then quickly dampens the wood so that it begins to smoke, just as you would prepare wood chips for cooking. He turns the cocktail glass upside down atop the smoking wood to capture the smoky essence inside the glass which will next cradle the cocktail.

“I love the earthy, spicy richness that you get from the whole ginger,” Chedd said. “I chop it up and throw it in the blender for a two-to-one rich, strained syrup.”

This cocktail is smoky and citrusy. It’s a multi-sensory experience for sure. You can smell it before you taste it and it feels warm and soothing as you drink it down.

“If you go to any true cocktail bar and order a Penicillin cocktail, they will know exactly what you are talking about,” Chedd said.

Chedd has been the bar manager at Publicans for two years. He was previously at a bar in Huntington that has since closed. He has been a bartender for more than 12 years.

Publicans’ cocktail menu is Chedd’s own curation. It changes seasonally, but he keeps several tried and true cocktails that are traditional at the historic taproom.

Publicans on Plandome Road serves up some fantastic comfort foods and terrific atmosphere, whether or not you partake in alcohol. Publicans offers a full lunch and dinner menu, including soups, salads, appetizers, burgers, wings, tacos and plated entrees.

The pub is located at 550 Plandome Rd. in Manhasset. Visit www.publicansmanhasset.com or call 516-627-7722 for more information.