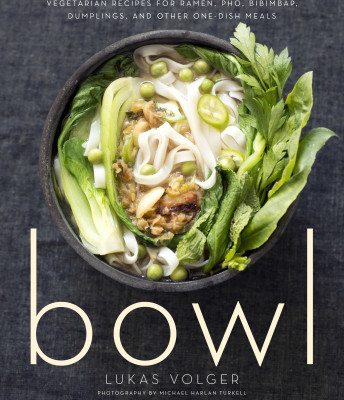 Start with cups of vegetarian broth, simmered with salt and a tiny bit of sugar to round out the flavors. Add rice noodles, tomatoes, peppers and eggplant roasted over the open flame of a gas burner and top it all off with herbs, chili oil, ginger and lime wedges. The outcome: a bowl of Lukas Volger’s Smoky Summer Pho, a delicious variation on the pho and ramen dishes that are taking the country by storm.

Because there are few precedents for such vegetarian dishes, Volger, who is also the founder of Made By Lukas, a premium veggie burger company in Brooklyn, has captured some of the tastiest recipes in his new book, Bowl: Vegetarian Recipes For Ramen, Pho, Bibimbap, Dumplings, And Other One-dish Meals, which debuted on March 8.

The vegetarian meals in Bowl offer guidance and an opportunity for experimentation, and are designed to help you get the most from your farmers market haul, whether you are cooking a family meal or a tasty dinner for one.

Volger’s own ramen explorations led him from a simple bowl of miso ramen to a glorious summer ramen with corn broth, tomatoes and basil. From there, he went on to the Vietnamese noodle soup pho, with combinations like caramelized spring onions, peas and baby bok choy. His edamame dumplings with mint are served in soup or over salad, while spicy carrot dumplings appear over toasted quinoa and kale for a rounded dinner.

Imaginative grain bowls range from ratatouille polenta to black rice burrito with avocado. And unlike their meatier counterparts, these dishes can be made in little time and without great expense.

Volger’s dishes in Bowl rely on seasonal produce and herbs and pulling flavors from Japanese, Chinese and Korean cuisines. Volger explores everything that goes into a great meal, from a perfected vegetarian broth to rice cooking tips and dumpling shapes and varieties.

He shares the best ways to make your own authentic ramen noodles, red curry paste, garlic chips and pot stickers.

Volger is the author of two other cookbooks, Veggie Burgers Every Which Way and Vegetarian Entrees that Won’t Leave You Hungry and is the editorial director of the biannual magazine Jarry. Bowl is available wherever books are sold, $25.

Editor’s note: I made five recipes from Bowl. Each one took more time than I anticipated because I was unfamiliar with some of the ingredients and techniques. The results: delicious. Make again? Mostly yes. Although there are several places in Nassau County where these ingredients can be purchased, I found everything I needed in one stop at Hmart in Williston Park (also in Great Neck).