The success of American Idol, which is one of the longest running reality singing competitions in the country, has been described as unparalleled in...
Read more
News

Science fantasy has always served as a huge influence for Gary Numan throughout his musical career. So it goes with his current album, Savage: Songs From a Broken World. A concept album centered on a post-apocalyptic world devastated by global warming that has spawned a unique fusion of Eastern and Western Culture, the songs themselves were inspired by an unfinished novel Numan has been working on for a number of years.

Numan is quick to point out that he leans towards science fantasy and not science fiction. “It’s not alien or all that sort of nonsense” he said.

To that end, he shared three of his favorite writers in this particular genre of choice.

“Tchaikovsky wrote an awful lot about human beings that have the characteristics of insects. It sounds a bit weird, but it’s so clever and it’s really interesting.”

“He has a way of describing his worlds, which makes it very believable. There are some people you read and it all sounds quite silly. There are people that don’t have the skills to be able to draw you into that world and they don’t have the scope and the breadth to have multiple cultures and languages all interacting in a way that you can understand and that you can follow. And beyond all of that, you need to have stories that are interesting with characters that you’re interested in. And he has that. Lawrence and the other two authors I mentioned stand head and shoulders above the masses for me.” 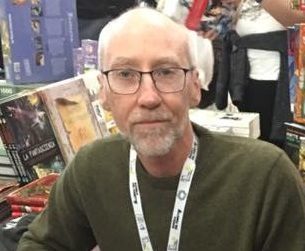 “Erikson has an entire future world. An absolutely vast and epic kind of world where there are multiple gods, demons and all kinds of bizarre creatures. But it’s not science fiction or alien. It’s all based around the human structure.”

Gary Numan will be appearing on Dec. 7 at Brooklyn Steel, 319 Frost St., Brooklyn. For more information, visit www.bowerypresents.com/brooklyn-steel or call 888-929-7849.