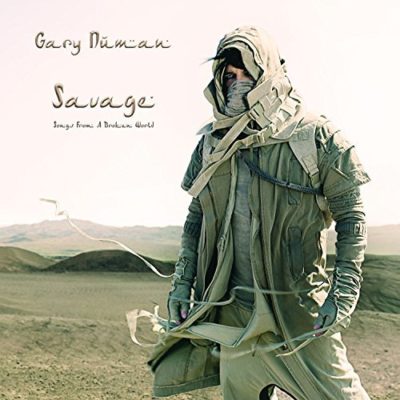 The warhorse phrase about truth being stranger than fiction was never more appropriate than in the case of Savage: Songs From a Broken World, Gary Numan’s 22nd studio album. For Numan, best-known in the States for his 1980 Top 10 hit “Cars,” there was a bit of a writer’s block he was having to contend with on his most recent project. Part of it was due to the pressure to follow up on the success of 2013’s Splinter (Songs From a Broken Mind), an outing that was his highest-charting UK album since 1983’s Warriors.

While the song “Bed of Thorns,” addressed the pressures he was feeling, the London native started nicking ideas around the end of 2015, from a science fantasy novel he’d been working on for a number of years. With the book’s main premise and setting tied to a post-apocalyptic world beset by the after-effects of global warming, he was struggling to figure out how this kind of thing might end up realistically happening. And then, Donald Trump started his most recent presidential run.

“As I was stealing ideas from this book about an apocalypse caused by global warming, I begin to notice Donald Trump undergoing his attempt to become president. I started to listen to the negative things he was saying and part of it had to do with global warming. I thought that was a coincidence and had some relevance to what I was writing about,” Numan recalled. “Within the story, I’d been struggling to find a reason as to why a global warming apocalypse would happen. We had the Paris Accord and it very much looked like the problem was in hand and the world was recognizing it as a problem and they were doing something about it. So I thought how this potentially happening could realistically be part of my story. And then Trump appears, saying the things that he’s saying, and I thought that was the answer. Arguably, the wrong person comes along at the wrong time, but with huge power and makes a couple of unfortunate decisions and the world is plunged into this apocalypse. So then I did a few more songs and before I knew it, I’d ended up with this concept album. The whole thing was pretty much devoted to this global warming idea. I hadn’t really intended that when I started, but because of Trump it made it so relevant, really.”

Returning to the studio with Ade Fenton, a former fan who Numan first started working with dating back to 2006’s Jagged, the storied synth-pop artist emerged with a dozen songs rooted firmly in the science fantasy world he’s been creating in his novelization side project. The premise of Eastern and Western culture melding and religious ideology being set aside over the real-life concerns of day-to-day survival are reflected in various ways. The cover imagery finds Numan swathed in layered clothing and head covering while standing in a desert setting. The font used on the album looks Arabic while on a sonic level, he uses ambient soundscapes infused with Middle Eastern melodies and instrumentation to drive this point home on songs like the Depeche Mode-flavored “When the World Comes Apart” and the Nine Inch Nail-ish “Party For the Pain You Serve.” Most impressive is “My Name is Ruin,” the album’s first single which is sung by Numan’s then-11-year-old daughter Persia. Rightfully proud of her contributions, the 59-year-old Brit is adamant in pointing out that her contribution was a combination of meritocracy, opportunity and need.

“I hadn’t intended for her to be on it and it’s really not a dad trying to shoehorn his kid onto a record. She is an absolutely amazing singer. She came home from school and I was working on a song called ‘My Name is Ruin’ and I couldn’t get it to work with my voice during these certain parts,” he explained. “She popped into the studio to say she was home and I asked her if while she was there, if she wound mind doing some singing for me. I told her it would be really easy and only take a few minutes. So she did it and absolutely nailed it. There is this Arabian chanting thing she did, then she multi-tracked it and she absolutely got it right and ended up doing three completely separate parts, multi-tracked and everything. It really made a difference to the track and then BMG, the label, decided to put it out as a single and we made a video for it that she’s in. What makes me proud is that she’s genuinely contributing something to this record that I couldn’t do. She made a difference and she made a difference visually to what we did. As a dad, I couldn’t be prouder.”

Currently on the road promoting his new album, Numan is focusing on material from his last two albums, along with a handful of songs from the very beginning of his career. With 22 studio albums, there’s not only an impossible amount of material to cover that wouldn’t fit into an hour-and-a-half set, but Numan admits how little he cares for the projects he worked on during the greater middle part of his canon.

“The focus is on the new album obviously, so we do about six songs from it every night. I have to say that people need to expect that. We’re very much focusing on Savage and we do a fair amount of material from the previous album Splinter as well. I do about a half dozen things from the “Cars” period and the rest of it is much more recent,” he explained. “I don’t really touch anything in the years in between, so there’s something like a 35-year gap. I was really happy with what I did in the beginning of my career. Those songs are also quite easy to translate and you can rework those songs so they sound quite comfortable alongside what I’m doing right now. There’s a lot of stuff in the middle that I’m not so keen on and would rather not play live. And you are promoting a new album and your interest is in the new stuff, so that’s what you really want to be focusing on. So that’s what I’m doing really. It’s the opposite of nostalgic.”

Gary Numan will be appearing on Dec. 7 at Brooklyn Steel, 319 Frost St., Brooklyn. For more information, visit www.bowerypresents.com/brooklyn-steel/ or call 888-929-7849.