The circus is coming to town. And while you won’t find clowns under this big top, you will find plenty of amusements, as Cirque du Soleil brings Volta to the NYCB Live Nassau Veterans’ Memorial Coliseum.

Volta is unlike any other show in Cirque’s repertoire, combining BMX, acrobatics, rope-skipping and larger-than-life tricks. With 30 years of stage shows in their wake, the creative team at Cirque du Soleil finds itself challenged year after year to bring something new to the audiences who flock to cities around the world to be dazzled by feats they never even knew possible.

And despite three decades of shows (with 21 currently underway around the world), Cirque is constantly pushing the boundaries. Volta artistic director Michael Smith noted that the show has a “contemporary” feel, and as such, the creative and casting team sought to find acts that would have an urban and youthful feel.

BMX, with its free, uninhibited essence, played well into that. This is the first time a Cirque show has included BMX; the company even created a new division in its casting department—“extreme sports”—to find artists to fill the role.

But BMX isn’t the only “first” in the show; Volta also includes hair suspension, which involves an aerial artist hanging from her hair.

“It’s a super old theater tradition that we have never used at Cirque before. It’s incredibly feminine and surreal, so we represent it as a dream,” said Smith.

Also adding to the youthful feel is a rope skipping act, which in true Cirque fashion includes an exceptional level of acrobatic ability. Artists perform single rope and double Dutch sequences, while tumbling, flipping and doing handstand hops through the spinning ropes. Those acrobatic feats make an appearance elsewhere throughout the show, including with a trampoline wall scene where performers transform the stage into a playground.

But more than just incredible feats, Volta carries with it a universal message.

“This show is about self-realization. We all have an idea of ourselves we think is not acceptable to the world at large,” noted Smith. “How do you find a way to love and accept yourself in order to present yourself to the world as you are?” 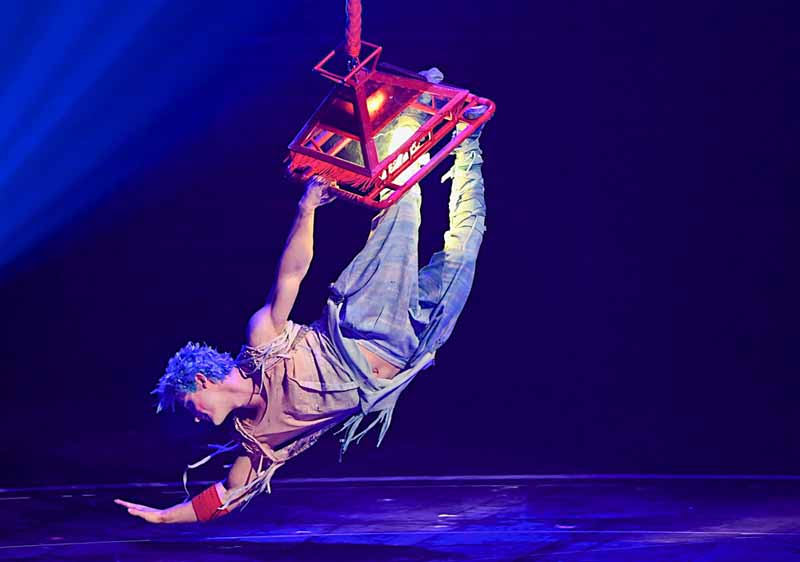 It’s a theme that can be embraced by global audiences spanning the generations and Smith notes that everyone walks out of the big top taking something else away.

“We’re there to inspire and show people in the audience how to do the impossible. I think that’s part of why people come to Cirque,” Smith said. “We throw something out there and the people in the big top will use their imagination to interpret what we’re saying. It’s a concept and idea but we don’t lead people by the nose.”

And that implicit conversation with the audience is essential to stitching together a Cirque show, said Smith. After the two years it takes to create a show, all their performances go through a one-year “evolution” process, where acts are cut, added and modified based on audience reaction.

“We’re not doing it for us, it’s for the audience,” said Smith, noting that the big top provides an intimate, unique atmosphere to the show. “The big top is an exchange with the performer and the audience and the energy the audience gives back to the performers, they give back and it’s a circle of inspiration.”

Volta runs May 17 through June 10. For more information, visit www.cirquedusoleil.com/volta.

Find out what it takes to bring Volta to life in Behind The Scenes Of Volta.

Behind The Scenes Of Volta