While Cirque du Soleil is known for its death-defying feats and stunts that push the boundaries of human physicality, an immensely talented creative team helps bring these performances to life.

The Fabric Of The Show

The stunning costumes of Volta echo the themes of alienation and self-realization. They also reflect the Do-It-Yourself mentality of those who strive to “find their free.”

The stylish handmade creations were designed by Zaldy Goco, famous for his work with Lady Gaga, Michael Jackson, Britney Spears, Gwen Stefani and for RuPaul’s Drag Race.
More than 1,200 costume elements were produced by the artisans in the costume workshop at Cirque du Soleil’s international headquarters in Montreal. These skilled artists helped create costumes that tell a story; the colorful, complex costumes of the FREESPIRITS call to mind individuality and a love for life while the grey patchwork-type patterns of THE GREYS represent how they have replaced their zeal for adventure with repetition.

A distinctive headdress filled with 1,500 blue feathers was also created for the main character, WAZ, while a golden coat is only fitting for the attention-seeking celebrity, MR. WOW.

The Latest In Tech 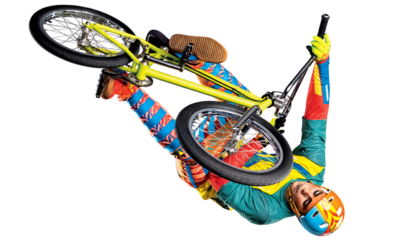 Volta’s video control system is 100 percent interactive and can be triggered by the simple kick of a drum or the sound of a voice. Technology plays a huge part in the show, with the stage ringed with LED lights and lined with a forest of movable lampposts that serve to focus the audience’s attention on the performance.

The team also capitalizes on the use of video to take the audience back in time, with short “family movies” played on two LED panels to evoke the main character’s simple, happy childhood. Superficial, computer-generated video also lend well to the cold, slick world of the MR. WOW show. 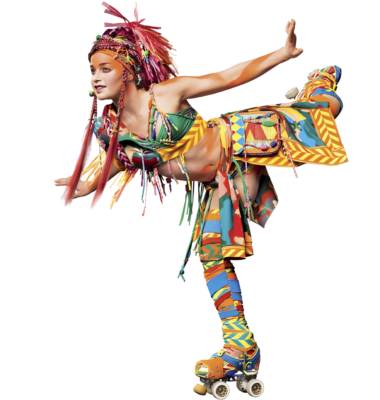 Written by composer Anthony Gonzalez (M83), the highly cinematic music of Volta evokes a complex array of emotions and moods that ebb and flow, always in sync with the acrobatic performances on stage. It is a narrative tool, echoing the different arcs in the storyline and expressing the distinct personalities of the worlds of Volta—the GREYS, the MEMORIES and the FREESPIRITS.