Up until the coronavirus pandemic struck Long Island, Matthew Brown, a resident of Port Washington was performing guitar full time with the orchestra of the hit Broadway musical Dear Evan Hansen. The coronavirus has shut down Broadway for the foreseeable future, forcing Brown to concentrate his efforts on helping others with their music projects, as well as offering virtual music lessons to children and adults.

Brown’s began his musical career at the age of 13, when he began playing the guitar. He eventually expanded his musical palette—taking lessons on three instruments simultaneously. During his high school years, Brown attended a pre-college division at the Manhattan School of Music, where he majored in jazz guitar and studied with some of the world’s finest musicians including Jonathan Kreisberg, a contemporary jazz guitarist.

After graduating high school in 2010, Brown continued his musical career at The New School for Jazz and Contemporary Music. As a jazz guitar performer, The New School challenged Brown’s musical ability in new and exciting ways.

“When I started studying at places like Manhattan School of Music and The New School for my undergraduate program, it was truly jaw-dropping how deep the pool was in terms of people at a very young age, being really consonant, professional, well-rounded players already,” Brown said. “This really pushed me to study outside of my comfort zone and study with a lot of world-class players.”

Later on in his undergraduate career, Brown began realizing that performing jazz guitar wasn’t going to be a realistic way for him to earn a living. He confided in a mentor—one of his music teachers from Schreiber High School who had worked in the Broadway industry and suggested Brown consider getting involved with Broadway as a way to make money.

“In 2011, I had the privilege of substituting a number of times on a Broadway show called Follies at the Marquee Theater on Broadway in Manhattan. This was a big moment for me in terms of getting my name out there in the scene of a freelance professional musician in New York, which can obviously be a very over-saturated scene. There are a lot of players who have come out of very great schools in New York and all over the world.”

After substituting for Follies, Brown’s talent and skillset led him to a full-time tour across North America where he performed in Broadway musical productions, such as Flashdance The Musical (2013-14), Dirty Dancing—The Classic Story Onstage (2014-17), Beautiful: The Carole King Musical (2017-18) and most recently the Dear Evan Hansen tour, where he was performing eight shows a week on the jazz guitar until the pandemic hit.

Performing the music for a Broadway show, where the pit is usually hidden from the audience is a unique experience that many often ask Brown about.

“It’s an area of the music business and performing professionally that a lot of people don’t really know anything about,” Brown said. “When you’re in a pit on a Broadway show, your function as a musician is to literally be unnoticed, which is unusual being a live performer.”

Playing guitar for more than 600 performances of Dear Evan Hansen, the orchestra is often going unnoticed by the audience, although the performers’ job is to be as consistent as possible throughout every show. 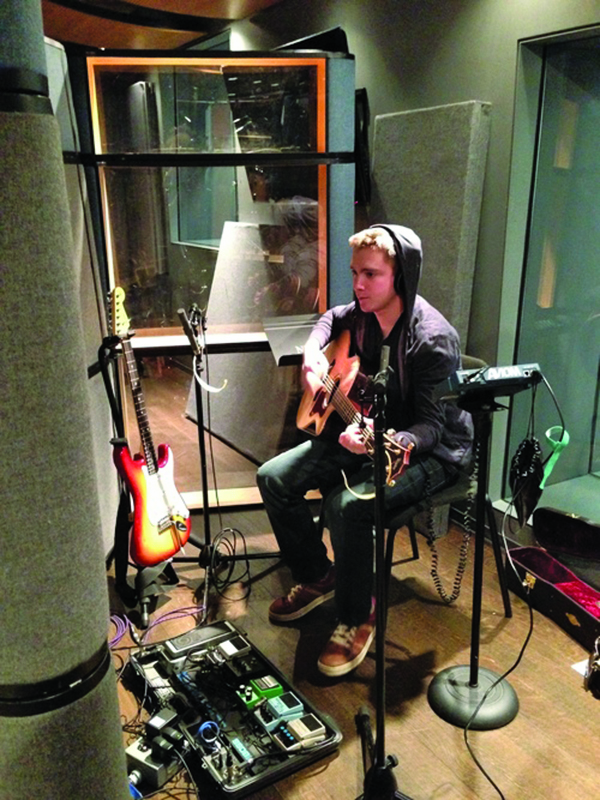 “You want to come in every day and be as consistent as possible and deliver the best performance possible to your fullest professional capacity eight times a week, every day.”

Many artists have been using this quarantine to create beautiful music and explore their more creative sides. Brown has been working on a number of projects with people from all over the United States, helping them put together music tracks for various productions.

“It’s really powerful seeing, particularly in my field and really in any creative field how much people are accepting the reality of what we need to do as a society and embracing whatever part of it they can,” Brown said. “I think that in the long run, hopefully when this is all behind us, it will yield a very beautiful development among humans, which is that we are more even more capable than ever before of interacting, collaborating and communicating with each other creatively and professionally.”

Brown has been offering technical instruction for guitar, piano, keyboard, as well as music production. Anyone is welcome to sign up for instructional classes, whether you are a beginner or advanced level musician. The virtual instruction will be offered at an affordable rate so that everyone has the opportunity to learn anything they may want to during this time.

“I understand the economic impact of the situation and also I really do genuinely want to help students who are faced with having to spend all of this time at home not doing their usual activities,” Brown said. “I want to help people not only put their time to good use, but get music into their lives in a way that they might not have before.”

Broadway musician, Matthew Brown is offering virtual music classes amid the pandemic. Brown is hoping that by offering others his musical expertise in the form of music classes, that he will help people turn their boredom and free time into the opportunity to learn something new and creative.

For more information about Brown’s musical expertise or the virtual instruction, visit matthewbmusic.com, or email mattbmusic@me.com.