Prog-rock and fusion share a common bedrock as offshoots of genres—in this case rock and jazz respectively—that have created and sustained a rabid fan base while enduring the often dismissive scorn of proponents of its mainstream origins. To that end, Yes and Mahavishnu Orchestra represent groups that are high-water marks for their musical categories.

So it should come as no surprise that ex-Yes frontman Jon Anderson and Mahavishnu violinist Jean-Luc Ponty should find each other and furthermore, wind up recording Better Late Than Never, a CD/DVD project that was first proposed as far back at the 1980s. And while this was the first time the duo has worked together despite knowing each other from hitting the road together in the 1970s with their old groups, this initial foray into the studio has proved to be fruitful.

“I believe the first time I met Jean-Luc was when he was on tour with Mahavishnu Orchestra,” Anderson explained. “[I will say that] a breakthrough feeling came as I sang with Jean Luc’s music, to be in a band again is very exciting on many levels, we will play and sing our way around the world and have fun, for music is pleasure, music is all that is.”

The feeling is mutual as far as Ponty is concerned.

“Collaborating with Jon, who is such a creative singer/songwriter, is unlike any project I have done before,” he said. “I knew that we had plenty of musical affinities to make it work, but the result is way beyond my expectations. It is also a lot of fun to reunite with these excellent musicians who played with me in the past, they really put their heart in this project and with Jon’s creative input we are not just rehashing the past but giving a new life to the music we started developing decades ago.”

For this live album that was recorded in September 2014 at the Wheeler Opera House in Aspen, CO, the duo led the six-piece Anderson Ponty Band through a set heavy on Yes material that includes “Roundabout,” “Wonderous Stories,” “Long Distance Runaround,” “And You and I” and even a reggae arrangement of “Time and a Word.” Working with a quartet of musicians who have played with Ponty for years also allowed for including “Infinite Mirage,” a new song that incorporates elements of the French instrumentalist’s classic “Mirage.” 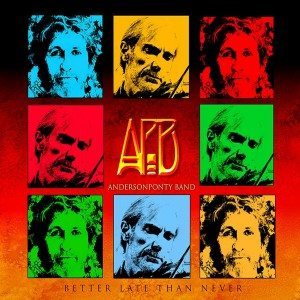 Chalk this latest musical adventure Jon Anderson is undergoing as the latest chapter in a lifetime of endless creative exploration that’s found him going above and beyond his longtime role in Yes and working with a wide array of artists including Vangelis, Kitaro and Milton Nascimento. And while the Internet and social media has dealt quite a blow to the music industry and how artists figure out how to keep their heads above water, it’s been a boon for someone as creatively restless as Anderson.

“It’s opened up the doorway and I’m in touch with a dozen or so people around the world—Africa, Italy, France, Canada, Australia. All of these people connecting together making music is just the best thing in the world,” he said. “For me, it’s a lot easier to collaborate with a lot more different people because it becomes an adventure. Music should be adventurous and not something you just do in life. I’m composing piano concertos as well as modern electronic music with a couple of friends along with some ethnic music with other people. It’s an adventure.”

And while some musicians might bristle at the thought of being labeled a prog-rock musician, it’s a term Anderson embraces, along with his legacy in Yes.

“[Being called a prog-rocker] doesn’t bother me too much because I’m a progressive artist that works with lots of different kinds of music. I’m always progressing. I’m not in a box like punk rock, but I’m a progressive musician,” he said. “As for Yes, we survived with me about 35 years and the music still survives 47 years later. It’s quite amazing.”