Through the course of 10 seasons on Travel Channel’s Bizarre Foods, host Andrew Zimmern has eaten salted tuna sperm in Sicily, sunk his teeth into 10-year-old tofu in Taipei and drank cow urine in Goa. But the intrepid chef, writer and explorer doesn’t devour these daunting meals purely for spectacle—he rarely wakes up with a craving for dung beetles, for example.

While swallowing interesting and often grotesque foods in far-flung corners of the world, Zimmern aims to shift viewers’ hard-line perceptions about the world in which they live—while jarring loose global misconceptions one morsel at a time.

“I want people to go outside of their comfort zones in their thinking,” said Zimmern. “I couldn’t care less about the food. I use the food and the experiences as a tool to explore the idea that the way in which we think about things is limited and that we, as human beings, are guilty of a horrific and evil and pernicious practice, which is contempt before exploration.”

Breaking through the general public’s wall of ignorance in regard to international cultures and concerns is a challenge for any host, no matter the platform. Zimmern’s way through that wall is the universal language of food. Bizarre Foods places Zimmern at the dining table with multi-ethnic populations that, at times, have been vilified in the hearts and minds of the American citizenry.

Citing various refugee crises sprinkled across the globe, Zimmern said judging entire populations of people based on the angry rhetoric of the ignorant few is a dangerous proposition.

“I think it is the absolute apex of ignorance. It is a busy world filled with a series of competitive ideas that are constantly vying for attention—to judge something without experiencing it borders on criminal and in some cases actually is criminal,” he said. “Everybody sees refugees from Syria as being some sort of horrific tornado of criminality that’s headed our way. These are families. These are doctors and teachers and firemen and police officers and store owners and shop clerks and their families in these refugee zones that we need to help.”

To Zimmern, Bizarre Foods at its core is about patience, tolerance and understanding in an attempt to get people to be more open-minded. He believes that the way to achieve that is with food—because if he did it with refugees, nobody would tune in, the same way that few read those articles in newspapers or pay close attention to those stories in the nightly news.

“Sadly, in America we are raising for the last 40 or 50 years, generations of people who are becoming more and more ignorant of what’s happening in the world around them, and my goal with the show is to try to jostle people out of their comfort zone,” he said. “But I want to do it with something that is commercial. I’m exploiting the opportunity to do it with food and I very gratefully do that.”

Zimmern, a constant tourist and troubadour telling the stories behind the food, began his culinary journey as a child in 1960s New York City.

He remembers going to Chinatown’s Nom Wah for dim sum with his parents and grandparents and accompanying his father several times a week for a burger at JG Melon on Manhattan’s Upper East Side. Meanwhile, Zimmern’s grandmother was the head of several committees at Mount Zion Temple and was treated like Jewish royalty during her shopping exhibitions—this meant many tasty freebies for the young Zimmern to sample. 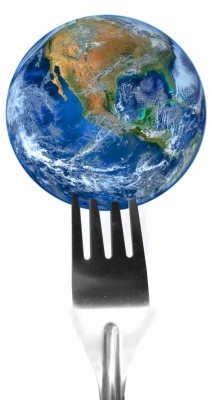 “It was the greatest thing in the world because everyone behind the counter, every counter man would give me a bissel, which is Yiddish for a little taste or nibble,” said Zimmern, adding that he’d also go with his father to James Beard’s house for brunch, which would invariably take place in the afternoon as the legendary cuisine master was “a notoriously late sleeper.”

“We’d hang out there and eat for hours with a ton of food people in the late ’60s and early ’70s in New York. It was fantastic,” he said.

Those early experiences coalesced like a rich stew in Zimmern’s mind, sending him directly into his career as a chef and later into his current profession as international food ambassador.

Before his days on television, the travel bug merely helped Zimmern expand his own mind—now, he’s revealing newfound cultural flavors to a wide audience, one dung beetle at a time.

“It’s what I take the most pride in,” he said. “I want people to go outside of their comfort zones in their thinking. And I do it with food.”

For Andrew Zimmern’s must-eat cities, see Will Travel For Food.