Will Travel For Food 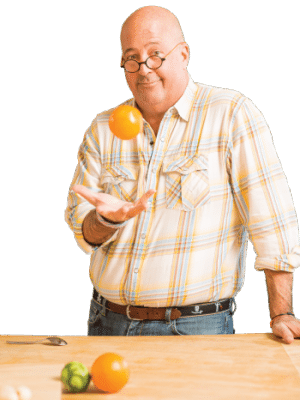 Andrew Zimmern, host of Travel Channel’s Bizarre Foods, has always been a world traveler—even before his fame skyrocketed, thanks to his inclination toward exotic eats and fascinating stories.

“I’ve always had the travel bug and I did it on my own dime for decades,” said the host, currently in his 10th season of Bizarre Foods. “When you have a television budget paying for your travel and it’s your main job, it certainly escalates to the point where, for people who love to travel, it’s the greatest job in the world.”

That job has taken him around the globe and back again, through cities like Manila, Tel Aviv and Ho Chi Minh City. But his craving for world cuisine germinated in New York City, where his love of Chinese food expanded in the 1970s, when Richard Nixon’s détente with China brought an influx of highly skilled chefs to America.

“I remember my first taste of real ethnic Chinese food driven by contemporary Chinese chefs and it was a revelation,” said Zimmern, who still believes New York City is the best food city in the world. “You have the best balance of ethnicities, hundreds of them, in large enough numbers to experience their cuisine and quality.”

As for Long Island, Zimmern’s family owned a house in East Hampton from the early 1950s until the late 1990s, so the chef has spent at least half of his life on Long Island. While he believes Long Island has amazing restaurants, Zimmern said life on the island was never really about going out to eat.

“It was always about accessing the incredible seafood and the incredible farm experience that so many magazines tout now,” he said. “We were living that in the ’60s and ’70s. Amagansett Farmers Market was open and we were regular shoppers there and they had their actual farm right behind the stand.”

As for the seafood, Zimmern said, “Most of the time we were on the beach when a longboat would come in through the waves and we’d walk up to the boat and we’d intercept the fish before it went to the store, which was always a lot of fun. We also foraged for food ourselves—we’d go clamming, and in the bay we’d cast for striped bass and we would crab on Georgica Pond. I grew up doing that.”

Now a seasoned world traveler, Zimmern struggles to pick must-try cities mainly because he literally has hundreds of favorites that are all different sizes with different cuisines and “different everything.”

But for the American traveler who is always hungry, Zimmern’s current list of must-visit cities include, in no particular order, Mexico City, China’s Chengdu and his sentimental favorite, Paris.

“But I could pick a hundred cities,” he said.

For more about Andrew Zimmern, see Behind The Food.

Will Travel For Food

Previous articleBehind The Food
Next articleUnder The Covers With Tesla