“I get to be the green girl. How awesome is that?” said Jessica Vosk, a born and bred Jersey girl, who landed the role of Elphaba in Broadway’s Wicked. The musical recently celebrated 15 years on the Great White Way and Vosk, who donned green skin in July, shared her whirlwind experiences thus far, including her role’s impact on society, a new album and what Kristin Chenoweth said to her backstage.

“I had a very musical childhood. My father taught me how to sing when I was 3—both of my parents are creative artsy people—and that laid the groundwork for figuring out how to make it in the world of theater,” said Vosk, who always had a dream of someday being able to do what her idols were doing.

At the age of 9, Vosk saw The Secret Garden and fell in love with it. Right away, she had her parents put her in as much community theater as possible, which she continued throughout high school and college. She first enrolled as a musical theater major at The Hartt School in West Hartford, CT, but found that it wasn’t her cup of tea, prompting her to leave and continue her studies at Montclair State University, graduating with a degree in communications.

“I actually worked in finance for three years. I never went to theater school, so it’s a different path than most for sure,” said Vosk, who worked on Wall Street for three years and during that time shut out anything creative. “I subconsciously put Broadway in the back of my mind until I realized a part of me was missing, so I started to go to open mic nights around Manhattan. I went to open calls and did the grind. Somebody heard me sing and took a chance on me.”

Vosk’s first foray into theater was at Carnegie Hall. The rest, she says, is history.

“When I got the call for Wicked, I was sitting in my dressing room for Fiddler on the Roof. I remember saying, ‘Don’t lie to me,’” she recalled, ultimately saying yes to the role of Elphaba on tour. “It took me a minute to fathom what was happening. I left Fiddler on the Roof and thought to myself, ‘What have I gotten myself into,’ this is the hardest role I have ever seen.’ I was so scared and really nervous.”

Vosk traveled on tour for 13 months and considered it a blessing to have met so many people along the way. The tour felt like a natural next step, until she joined the Broadway company this past July.

“It’s so surreal because this is such a big year for Wicked. This role is iconic; it’s a beast and not too many women have conquered and taken on this role,” said Vosk, who wanted to bring a lot of herself to the role. “Elphaba is very powerful and opinionated but she sticks her foot in her mouth a lot, which I can relate to. I always leave every show with these new notions about life and friendships and what it means to be different.”

The musical is based on the 1995 Gregory Maguire novel Wicked: The Life and Times of the Wicked Witch of the West, and serves as an alternate telling of Frank L. Baum’s The Wizard of Oz, taking place before and after Dorothy Gale comes to Oz. The themes of the show center on unlikely friendships between Elphaba and Glinda, and how bonds are created in the most unique places. Vosk noted that although the story for Wicked was created in 2003, it is still strikingly relevant.

“It’s hard to go there as Jessica Vosk and have everyone in the show be mean to you, so it’s hard to navigate that at times. I remember being a kid and being made fun of and I carried that throughout my life,” she said. “I am a very huge advocate of honesty and my hope was that I could take things that cause people a lot of pain, like bullying, and convey that it is 100 percent OK to be who you are and be unapologetic for it. Elphaba wants the best for everybody; she is selfless and completely misunderstood because the Ozians created her as a wicked witch.” 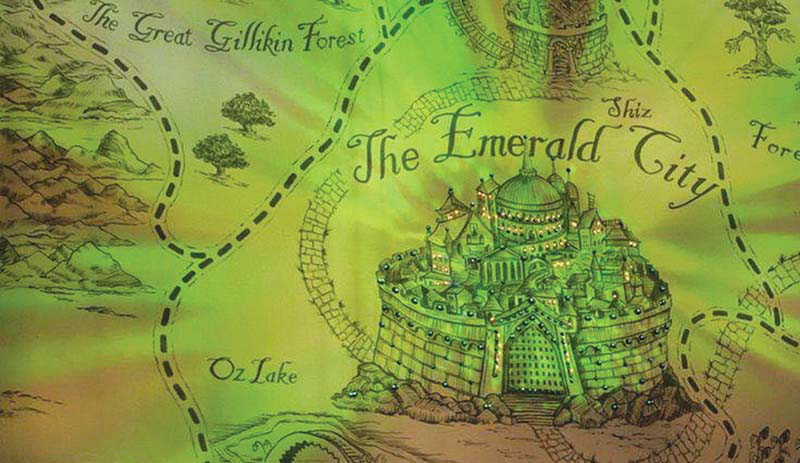 The show recently welcomed back Kristin Chenoweth and Idina Menzel, originators of Glinda and Elphaba, respectively, for a 15th anniversary television special. For Vosk, it was amazing to see the two women who created the phenomenon of Wicked.

“Those two are completely lovable and could not be more different. It was an honor to have Kristin come and see the show after 15 years of not seeing it,” said Vosk of Chenoweth, who went backstage after the show and exclaimed how proud she was of the entire cast. “I get a lot of strength from someone like Kristin Chenoweth saying she’s really proud of me. I take my cues from people like Idina and Kristin. Elphaba is a badass, period. And I think Glinda is too.”

When she’s not defying gravity, Vosk has become her own kind of popular, having released her album titled Wild and Free. Completely funded by the fans (her fanbase is 18-24 years old), Vosk got a Kickstarter campaign together and in 72 hours, funded about $40,000, strictly from her fans. The album is a combination of Broadway, pop and rock and is sold at the Gershwin Theatre.

“I remember being that kid at the stage door, going to the theatre and buying my idol’s cassette tape to get it autographed and I get to do that now,” she said. “I’ve trusted the universe thus far in pointing me in the right direction, why stop now?”