Where You Go Is Not Who You’ll Be

Spending time at home has taken on a new meaning these days. For many of us, the home is now also the office and...
Read more
TOP STORIES 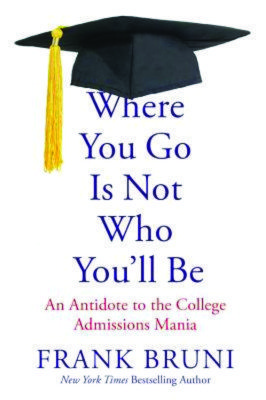 An antidote to the college admissions mania

In the next few weeks, high school students from around the country will begin getting letters from colleges to which they’ve applied. Many will be rejections. New York Times columnist Frank Bruni says that over the last few decades, Americans have distorted the entire college admissions process, preceded by test prep, tutors, rankings and a belief among young people that their futures will be determined and their worth established by which schools say yes and which say no. They believe that acceptance to one of the nation’s top colleges is the key to success, and that being denied entry will keep many other doors in life closed.

In his new book, Where You Go is Not Who You’ll Be, best-selling author Bruni explains why that’s flat-out wrong and devotes large sections of his book to discussing the fact that numerous successful CEOs, famous politicians, MacArthur recipients and prominent authors graduated from colleges that lack the glow of national prestige.

Bruni makes an argument for stopping what he calls the “college admissions mania.” His book broadens the conversation and goes a long way toward helping parents maintain perspective, even in a world where 18-month-olds are being prepped for Princeton.

Temple Sinai of Roslyn will host Bruni for a look at the college admissions mania on Tuesday, April 12, at 7:30 p.m. The free event is open to the public, underwritten by the Temple Sinai Marshall Hochhauser Memorial Lecture Fund and funded in part by cosponsors, the East Williston and Roslyn school districts.

Temple Sinai of Roslyn is located at 425 Roslyn Rd., in Roslyn Heights. For more information about the program visit www.mysinai.org or call 516-621-6800.