Where Can You Find The Best Sushi? Arata Sushi Just Might Be That Place 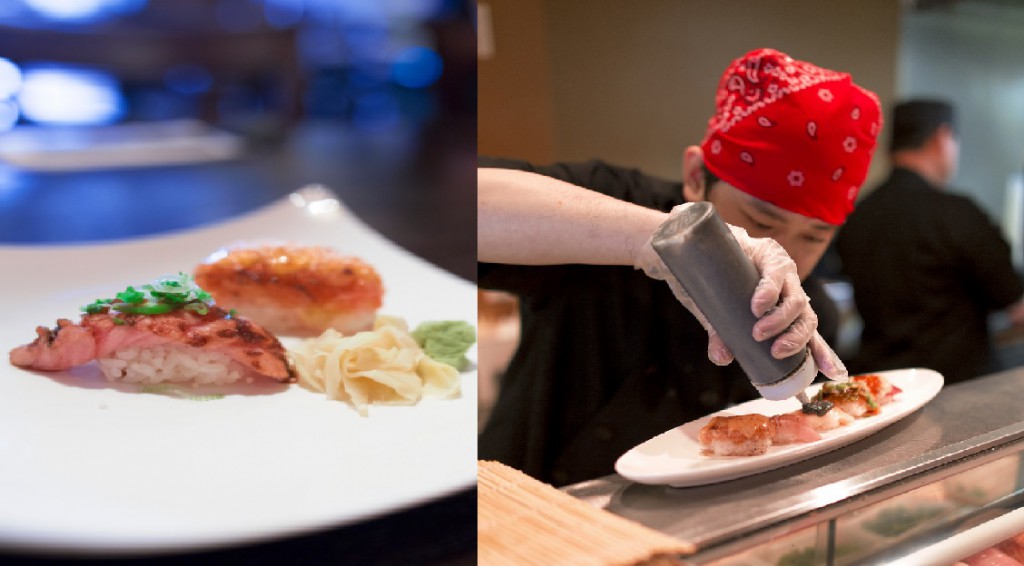 Not unlike pizza, sushi is one of those foods that enjoy slavish dedication from its fans, each of whom claim to know the place that makes it the best. For my money, you’re not going to have a more rewarding sushi experience than if you venture over to Syosset’s Arata Sushi.

There’s no soy sauce on the table. You don’t need it with the sushi prepared by chef/owner Jimmy Lian. “Soy sauce overpowers the flavor of the fish,” says Lian. “The flavors should support each other.”

That doesn’t mean that Lian avoids soy sauce; in fact, he makes his own. But in Lian’s world soy is used only when the chef determines that it makes sense to incorporate it into the dish.

The best way to experience Lian’s creativity and innate sense of flavor is to order his Arata Style Sushi, “five pieces of chef’s selection of contemporary sushi.” This is known as omakase, which means “it’s up to you,” based on the Japanese character for entrust or protect. When you order omakase you are trusting the chef to give you the best he has. At Arata, Lian lives up to his responsibility.

The chef uses many different sauces and techniques; sometimes the fish is grilled, sometimes marinated or roasted or cured. “It’s not just mayo, mayo, mayo here,” he says.

The line-up of Arata Style Sushi one visit included seared pepper tuna with yuzu mousse; tuna with edamame puree and ginger sauce; salmon with shaved Brussels sprouts and cilantro puree; white tuna with black sesame vinaigrette; and yellowtail with Japanese green peach and truffle salt. Each was distinctive and delicious and the intensity of the stab of green peach knocked me over.

Lian was not born to sushi. He is from Indonesia and came to the United State as a teenager 15 years ago. He liked cooking and his brother suggested he get a job in a restaurant. He started as a helper in a sushi restaurant in Brooklyn. “My first job wasn’t good,” he says. “A lot depends upon the chef.” But moving on to other sushi places he started eating the good stuff and honing his skills. Eventually he landed a job at the celebrated sushi restaurants in Manhattan such as Nobu and Bond Street. “Every restaurant is different,” says Lian; you learn the sauces, the menus, the skills. He learned the sushi culture and to speak Japanese.

“Japanese chefs were hard on me and I had to know the steps,” he says. When Japanese customers come into his restaurant wanting more traditional sushi, Lian prepares the food in the way they expect. So for example he cuts kanpyo roll, which is made from shaved calabash gourd, into four pieces, which is the way it is traditionally served, instead of the six pieces that are common in American sushi. For Japanese customers, soup is served at the end of the meal.

Three years ago, Lian decided to set out on his own, opening Arata, which meals fresh and new, in Syosset.

Dining at Arata one afternoon were Sherry Gutes and Les Skolnik who work at the nearby North Shore Synagogue and come often for lunch. Skolnik is a sushi afficianado; Gutes, who is new to sushi, loves all the textures together. “Sushi keeps me quiet,” she says, which, according to the two, is a major achievement. They have come to the restaurant with the rabbi and cantor of the synagogue and appreciate that the staff goes out of their way to meet their dietary needs. Dining at another table were Nabih Barakat of Bethpage and Jennifer Aloe of Muttontown. “Everything is very fresh and creative and the staff is friendly,” says Barakat.

Lian aims to please and finding that our photographer not only had never eaten sushi but also didn’t like fish at all, he asked permission to try to convert him. He prepared two pieces of tuna and grilled. “Fatty tuna is the most expensive fish in the restaurant,” he says. “For me to convert someone, it costs a lot,” he said with a smile. The photographer stepped up to the challenge and ate the tuna. While he didn’t swoon, he said it tasted good. “We’re not just making food,” says Lian. He appreciates the happy look on someone’s face when they like it.

I wondered how Lian came up with his interesting Arata Style. Sometimes when he plays guitar, ideas come to him. He also says he doesn’t want to take credit for himself. “I’m a Christian and inspired by my God,” he says.

Of course there are lots more choices at Arata than Arata Style Sushi; however I’m not ready to move on to those just yet.