Walk Like A Man: The Early Novels Of Richard Price 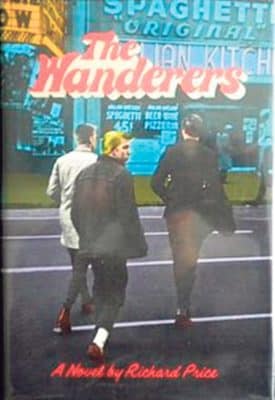 In the movie adaptation of Richard Price’s 1973 novel, The Wanderers, the opening scene shows a character from the film, Joey Capra, racing through the hallways of a large Bronx public high school while the Four Seasons classic “Walk Like A Man” blares in the background. You couldn’t come up with a more appropriate tune. Manhood—whether it is thrust upon a youngster or whether it remains a failure—is a theme of The Wanderers and Price’s other early novels.

Is it true that Price has turned 70? It was only yesterday that a teenager read a People magazine article about the young author and his first novel. Price has traveled far from The Bronx to the world of literary, and later, film and television writing success. Those early novels—The Wanderers, Bloodbrothers and Ladies Man—remain my favorite works. In those works, he achieved a necessary goal of the novelist: Putting a human face on characters from that borough, home to Yankee Stadium and the Bronx Zoo, and once the symbol (“the South Bronx”) of urban decay in America.

The Wanderers were Perry La Guardia, Joey Capra, Richie Gennaro, Eugene Caputo and Buddy Borsalino. All but Eugene lived in a North Bronx project. The theme is the typical boy-to-man journey. The Wanderers are tough, but frightened. They bond as brothers against the world—not just against other gangs, but also against parents, girlfriends, teachers and the public school factories. None are would-be criminals. Perry, the big man and Joey, the small, shifty halfback, are the closest. Manhood is forced upon them.

In Perry’s case, his father is dead of a heart attack. Later, his mother, whom he is close to, dies of the same disease after being trapped in a housing project elevator. Joey, meanwhile, is the only son of a former Mr. New York City turned city fireman. Emilio is disgusted by his scrawny son. He literally beats him into shape until one day when Joey fights back and cracks a wine bottle over his father’s head. After his mother’s death, the orphaned Perry decides to join the Seafarers. Joey tags along. Buddy and Eugene come to manhood the hard way. A romantic, Buddy gets involved with a loose teenager, Despinoza (or Despie), whom he impregnates and then dutifully marries. Eugene, on the other hand must live up to his father, a would-be lady’s man. Eugene has one conquest after another. However, a fight with Joey shatters his budding manhood. The battle-scarred Wanderer easily pummels the spoiled Eugene. In a dramatic scene, Eugene allows a girlfriend, Nina Becker, out into the Bronx night for a cigarette. Nina is apprehended and sexually assaulted. Eugene breaks in on the act, mumbles, “excuse me” and runs off. Eugene is then sternly lectured, not by his braggart father, but by his long-suffering mother. “One day my son, you will learn that the two greatest joys of being a man is beating the hell out of someone and having the hell beat out of you.”

Nina gives him a similar tongue lashing, bitterly denouncing his lack of manhood. Like many a working-class youth, Eugene compensates by joining the Marines. Only Richie fails at achieving manhood. Being warlord of the Wanderers is his life. By the spring of their senior year in high school, the other Wanderers know that adolescence is over. Adulthood will not be postponed by four years of college but embraced by typical working-class means: Time in the service or in Buddy’s case, a blue-collar job. Only Richie takes gang life seriously.

Like many working-class youth, Eugene compensates by joining the Marines. Only Richie fails at achieving manhood. Being warlord of the Wanderers is his life. By the spring of their senior year in high school, the other Wanderers know that adolescence is over.

The Wanderers was set in 1962, the pre-Vietnam America. By the mid-1970s, the setting of Price’s second novel, Bloodbrothers, Ellis Island New York has found refuge in Co-op City. Blue-collar work, in this case, construction work as an electrician, remained a reasonable ideal. The Wanderers is about gang life, loyal but transient. Bloodbrothers presents something far more gripping: Family life in terms of father-son, uncle-nephew and older brother-younger brother relationships. The clash is symbolic: Manly construction work versus “sissy” work as a hospital aide. Eighteen-year old Stony DeCoco, the novel’s hero, opts for the latter. His father and uncle have both followed their father into the tight-knitted world of construction workers. Stony’s next. But he balks. The joker in the deck is Stony’s younger brother, Albert. Stony’s mother, Marie, has a miserable life. She once fancied a singing career, but as with most women of the 1940s and ’50s, she opted for marriage and children. She is now stuck with a philandering husband who also humiliates her when necessary. Marie takes it out on Albert, a 9-year-old suffering from anorexia. Albert’s only hope is Stony, who protects his younger brother. Through Albert’s doctor, Stony gets a job in a children’s ward of a Bronx hospital. For Stony, manhood has arrived. He knows what he wants: A career as a hospital counselor, complete with a college degree. Stony is forced to make a deal with his father: two weeks at the hospital, then two weeks on the construction job. After that, at age 18, he must decide what he wants to do with his life. Impressed by his son’s manliness, Tommy gives in and tells Stony that hospital work is fine. But Stony’s family ties are too strong. Wandering Co-op City, he gets into a fight with a night watchman and decides to stick with construction work. “He’ll never say no to his father,” Stony’s girlfriend, Annette, confides to a mutual friend.

Bloodbrothers is a vivid portrait of 1970s life. Stony’s friends all have a job, a place and a car: That’s all they need. Being out in the world is everything. Stony wants to join them. It’s just not possible. How could he leave Albert behind to the nerves of his crazed mother?
Price published his next novel, Ladies Man at age 28. The hero, Kenny Becker, like Price, is the product of a Bronx housing project. The Wanderers and Bloodbrothers both mirror the old America in that 18 is the cut-off age for manhood. Ladies Man is more typical. Thirty is the big number. Becker is a college drop-out who makes a living as a door-to-door salesman. He pays for singing lessons for his live-in girlfriend, La Donna, even though she has no chance of success. A bibliophile, Becker fantasizes about being an English teacher, but he can’t even muster up the gumption to finish his last semester of college. When LaDonna walks out on her loser boyfriend, Kenny goes on a hilarious romp through the 1970s’ Manhattan singles scene. It works because Becker, loser or no loser, is a sincere guy. Full of rage, he wants to find fulfillment.

Kenny’s loserdom is highlighted by a chance encounter with his high school mates. One friend, Donny, is just as despondent. He dislikes his job and like Becker finds relief in debauchery. (Becker does want more.) Another pal, Candy, is proud of his life: A shoe store in the West Village, a wife, three children and a house on Long Island. But Candy is overweight and headed for a bad ending. When the threesome visits their old haunts in the Bronx, Kenny breaks down. “All we’ve done since then was dying,” he maintains. A typical theme, also. High school with the thrill of music and girls is the high point of a man’s life. Candy, however, snarls back that he has kids and “they’re the tops.” Overweight or not, Candy is the adult of the three.

Both Bloodbrothers and Ladies Man end up on Sunday evenings. Out of work, Kenny has an interview set for Monday for an adult back-to-school program at Fordham. The reader is left in suspense: Does Stony go back to the hospital when he wakes up on Monday morning? If so, what happens to Albert? Does Kenny go through with the college interview? He parties away a Saturday night with Donny. The next morning, a super-lonely Sunday, Kenny realizes his fate as a “ding dong” salesman. By not going back to school, Kenny is avoiding manhood. The truth, however, is that he is a good salesman, often ringing up his daily dollar quota by early afternoon or before. That’s about as optimistic as one can get about Becker.

In 1983, Price continued the boy-to-man theme with a thick novel, The Breaks. By the late 1980s, Price had started a new career as an accomplished screenwriter. I first read The Wanderers in 1976. Forty-three years later, I am still rooting for Buddy and Despie to make it. In 2009, Price came to the Sid Jacobson JCC for a talk. There, he said that he had run into a few of the real-life models for the Wanderers and they were living relatively normal lives. That was welcome news.