“What happens there is truly awful; it is like nothing you can imagine,” Jacqueline Finnegan, vice president of No Dogs Left Behind, Inc., told Anton Media Group in an interview describing the annual Yulin Dog Meat Festival in East Asia.

Finnegan said that dogs that are victimized by the dog meat trade suffer horrific abuse. They are beaten, bound with wire around their jaws and feet and crammed into sharp metal cages, where they endure long transports without any food or water.

Although the festival began in 2009, dog meat consumption in many cultures around the world has been recorded for centuries and continues legally in China, Nigeria, Switzerland and Vietnam, among other nations.

In 2016, Jeffrey Beri founded No Dogs Left Behind after successfully leading a historic rescue effort, which culminated in the transport of 121 Yulin slaughterhouse survivors from Asia, to their forever homes in the United States.

Beri and his team spent eight months on the ground in East Asia rehabilitating, medically treating and socializing the dogs, developing effective shelter operation protocols and establishing a vaccination and microchipping program. Through allied partnership, this historic rescue accomplished what no one had ever done before: executing a full-scale rescue operation from slaughterhouse to final transport, with the largest number of dogs that had ever been attempted, all within an eight-month period.

Beri went back to the region to bring 50 more dogs out of the dog meat trade, drawing on the experience he had gained in the first rescue and implementing the same shelter protocols he had developed.

Finnegan said that when the dogs are rescued, they are wounded, starved, dehydrated, sick and terrified. It takes countless hours of patient effort to show these survivors that they are safe and to teach them to trust humans again. Beri and his team work tirelessly with the dogs to train, rehabilitate and socialize them, a critical step to ensure they are ready for adoption.

No Dogs Left Behind works hands-on with local activists through emergency response, pulling dogs directly from slaughterhouses, dog meat trucks, wet markets and traffickers. The organization’s mission extends beyond borders worldwide, advocating for the creation and enforcement of animal welfare laws and raising awareness for a cruelty-free, sustainable world in which no animal is violated, exploited, tortured or slaughtered for commercial goods or profit.

With nearly 500 survivors in the organization’s care, No Dogs Left Behind operates sanctuaries in Dayi and Gongyi. In these safe-havens, these once victimized and exploited dogs receive medical care, nutritional support and rehabilitation on an ongoing basis.

In July, the United States suspended the importation of dogs.

“This adversely impacted our ability to get dogs rehomed to the United States,” Finnegan said. The organization had to divert its “Freedom Flights” to Toronto temporarily until the United States lifts its ban.

“Globally, the awareness of the Yulin dog meat festival has made a lot of people aware and its put some pressure on the foreign government,” Finnegan said. “COVID has changed the landscape of how we execute our mission; we cannot go into the schools for outreach and our volunteers have been restricted in the sanctuaries.”

“International pressure has helped because we’ve seen Indonesia and also South Korea have both taken a stance against the consumption of dog meat; that’s huge, but there are so many more countries and they have taken the position, but they have not enacted laws yet,” Finnegan said. “The pressure will always come with the dollars. How people spend their money helps move the needle one way or another. The international awareness and pressure has definitely been important.” 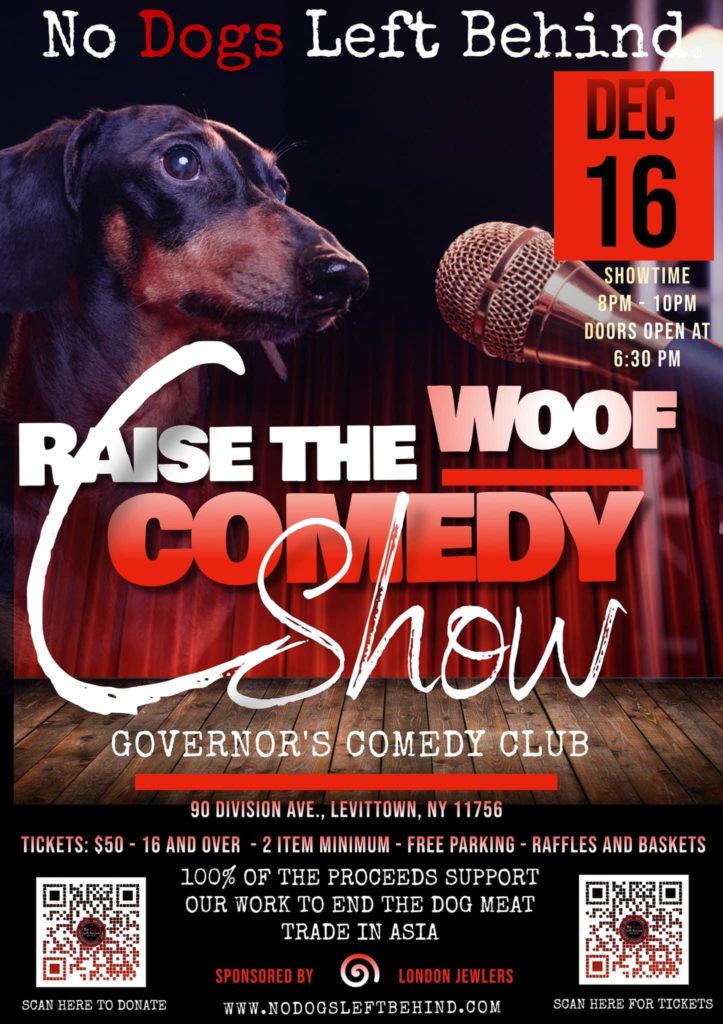 On Dec. 16, No Dogs Left Behind is hosting Raise the Woof, a comedy show awareness fundraiser at Governor’s Comedy Club (90 Division Ave., Levittown), sponsored by London Jewelers at 8 p.m. Tickets are $50; doors open at 6:30 p.m. Show is for guests, ages 16 and older, two-drink minimum purchase required. Parking is free. Raffles will be offered. All proceeds support the organization’s work to end dog meat trade in Asia.


Error: API requests are being delayed for this account. New posts will not be retrieved.