To the delight of his fans, musical icon Jeff “Skunk” Baxter is releasing his debut solo album, Speed of Heat, on June 17, on BMG/Renew Records. The name, no doubt, is instantly familiar to fans of Steely Dan and The Doobie Brothers. His presence in the music world, however, looms even larger. A renowned studio musician and producer, Baxter’s contributions are as ubiquitous as the famed Wrecking Crew or the Session. His extraordinary talent has graced hundreds of other artists’ work, among them Barbra Streisand, Carly Simon, Joni Mitchell, Carl Wilson, Ringo Starr, Rod Stewart and the Ventures.

With Speed of Heat, 72-year-old Baxter shows that his creative fires are stoked and that he is moving ever forward. Excited to share his new album with the world, Baxter is returning to the road with a tour that will bring him to Long Island on May 10, at the Metropolitan in Glen Cove, as part of the Long Island Classic Series presented by Michael “Eppy” Epstein of legendary My Father’s Place fame.

Speed of Heat features contributions from several notable guests, including Michael McDonald, Clint Black, Jonny Lang and Rick Livingstone. The album’s 12 tracks consist of a combination of originals and “inspired classics,” including a re-imagining of Steely Dan’s “My Old School” and “Do It Again.” Along with songwriting collaborator and musician C.J. Vanston, the album’s originals highlight the depth and scope of Baxter’s musical genius in vivid relief. In a word: astonishing.

From the driving, hard-edged take of Steely Dan’s “My Old School” to the haunting, a cappella pedal steel featured on “The Rose,” breathtakingly jaw-dropping moments abound. It is unmistakably clear that Jeff “Skunk” Baxter has created a definitive personal statement with Speed of Heat, one which will endear him further to his legion of existing fans while introducing him to a generation of new ones.

During a recent Saturday afternoon, Baxter was eager to talk about the new album and happy to share memories of some of the people and places he’s encountered in his 50-plus year musical voyage. Similar to another guitar-playing peer’s second career as an astrophysicist (Queen’s Brian May), a little-known fact about Baxter is that he is a highly respected defense consultant and counter-terrorism expert for the United States government. Addressing his alter ego directly during our conversation provided a fascinating glimpse into the mind of a man who is not only an acknowledged musical force, but also a keenly intelligent fount of fascinating scientific knowledge and experience.

Asked about the decades-long delay in releasing a solo album, Baxter explained, “I always thought it was kind of typical for any artist who leaves a very successful band to immediately do a solo album. I thought, nah, I’ll percolate a bit and it was pretty busy between studio work and producing records and playing with other folks. There wasn’t a whole lot of time. So, I got together with my buddy C.J. Vanston over the course of about the past 12 years. Every once in a while, we’d get together and do a little recording. It sort of blossomed. It was going to be instrumental and then I mentioned it to Mike McDonald and he said he’d like to play on it. (Also) Clint Black and Jonny Lang. I even asked Steve Tyler to sing on it and I sent him a copy of ‘My Old School’ with me doing a scratch vocal. He said, “Who’s that singing?” I said, uh, Steve, that’s me, I just (did) a scratch vocal, and he said, “What the hell’s the matter with you? Why don’t you sing it? It sounds good to me.” I said, well, you know more about this stuff than I do, so okay. (It went) on and on until it became almost half instrumental, half vocal. For the writing process, my buddy C.J. and I had been playing together for many years doing jingles (commercials) together, and we found that we write literally without talking. We could just start playing and things would happen. I (told) him that if someday I ever did a solo record, I would really like to do it with him. That’s kind of how it all worked out.” 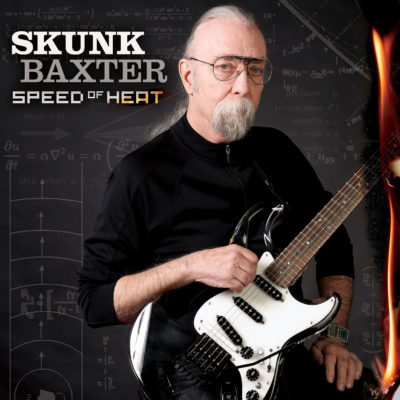 Baxter was able to bring out performances in his musical guests that transcended far beyond what they usually did on their own. Clint Black’s vocal on “Bad Move” is markedly different from what his fans are familiar with. When Black heard the playback, Baxter recalled, “He was really surprised, but he’s a big Steely Dan fan and the lyrics and the sort of feel of the first 16 bars has that kind of Steely Dan feel to it and he was right at home. You asked me about how I get the performances out of people. I’ve been producing records as well, for people like Billy Vera & The Beaters, the Stray Cats and a number of other artists—even the Ventures. That was the whole idea: Let’s see what you got.”

I wondered about Baxter’s decision to leave The Doobie Brothers at the height of their commercial success after 1978’s Minute by Minute. “It was a combination of so many different things,” Baxter admitted. “The band was changing. If you’re a change agent, you have to understand change and when it’s time. When I brought Mike McDonald into the band, it really, really changed the whole psychological, philosophical construct of the band. For many people, that was a very difficult change. When the band matured and, I would posit, had fully developed, and embraced the change, sometimes you don’t really need to be there anymore … and you need to know that; you need to read the tea leaves, so that’s kind of what happened.”

Baxter’s presence in the musical world is far broader than most people would suspect. I wondered how many artists he’s worked with as a session guitarist and/or a producer. “Oh, gosh,” Baxter chuckled. “I’m not trying to be disingenuous, I don’t know—500, 600, 800 sessions, movie soundtracks, jingles, scoring—it’s hard to say. I apologize, but I don’t have an exact number.
After the current series of shows, I asked Baxter what his future recording plans were. “I haven’t really thought about it,” he replied. “Again, I think that’s something I certainly would aspire to. It’s like having children—maybe you need to wait a little bit. Get familiar with the child you have and enjoy; take advantage of, and just live with and develop what you’ve already done. But certainly, I would like to consider it. This whole solo project was the last thing on my musical bucket list. That doesn’t mean it will be the last thing on the bucket list as a singularity.”

For the complete conversation, including a fascinating discussion with his “scientist alter-ego,” check out Island Zone Update.

Jeff “Skunk” Baxter will be appearing on May 10 at The Metropolitan, 3 Pratt Blvd., Glen Cove. For more information, visit www.metropolitandining.com or call 516-806-4111.