TONH To Use Bobwhite Quail To Help Control Tick Population 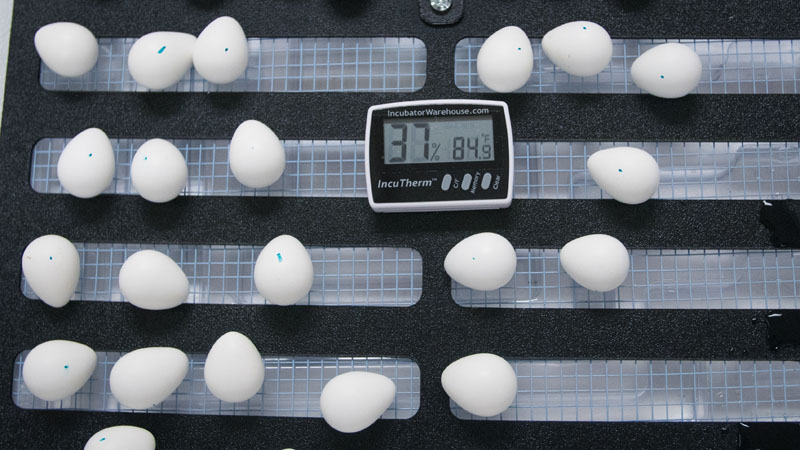 Just a few months ago North Hempstead Town Supervisor Judi Bosworth didn’t know much about hatching eggs, but that’s all changed as she is now keeping her eye on a small batch of Northern Bobwhite Quail eggs being incubated at the North Hempstead TV Studio in Westbury. The Northern Bobwhite Quail project is a pilot program designed by Ranger Eric Powers, the host of the NHTV’s nature show Off the Trail and assistance from Town employees, who will release the native birds back into the local environment, in order to effectively reduce the numbers of ticks naturally, instead of using toxic pesticides.

When the eggs hatch, sometime later this month, the baby quail will be kept at the studio for about another two weeks, then transferred to a park in Suffolk County where they will mature further. In July the birds will be brought back to their place of birth and be released in the town’s 200 wooded acres across from the North Hempstead Beach Park and also along the Hempstead Harbor Trail. Their mission? To eat ticks.

“Lyme disease is a very serious condition caused by deer ticks, which are prevalent in wooded areas and grasslands all over Long Island,” said the supervisor. “When I learned about the Northern Bobwhite Quail study I was very interested. The town is constantly on the lookout for natural methods we can use to control disease-causing pests that do not involved using toxic chemicals. The fact that we also get to raise the quail ourselves and enjoy watching the eggs hatch, well that is just part of the fun.”

Northern Bobwhite Quail’s populations have been decimated on Long Island over the years due to their number one predator—feral and indoor-outdoor cats.

“Cats take a massive toll on our ground-dwelling wildlife, such as Bobwhite Quail, which turns out to be our front line of defense against ticks,” Powers said. “So the biggest help anyone can do is to keep your cats inside. If the community wants my help re-establishing quail populations around Long Island to combat ticks then I need your help in return…please keep your cats inside.”

The NHTV station is not the only place incubating quail eggs. Mr. Powers also works with dozens of schools across Long Island who set up incubators in their classrooms and raise the quail as part of their animal life cycle studies that teaches science, environmental studies and responsible stewardship. To join the spring-time Quail vs Ticks Study, visit Ranger Eric’s website at www.YC2N.com.

View all North Hempstead TV programming on Channels 18 or 63 on Cablevision or Channel 46 on Verizon, or visit www.myNHTV.com or www.youtube.com/townofnorthhempstead.