There Must Be Some Misunderstanding: What You Don’t Know About Wicca And Wiccans

Even though Halloween might be the only time some people stop to think about wizards, witches and sorcery, there are some people who actively practice these common beliefs in their everyday lives. And while a recent Pew Forum for Religion and Public Life found the number of Wiccans remains relatively small to the U.S. population at less than 0.3 percent, this form of spirituality is enjoying modest growth in North America and Europe.

Followers consist mostly of young adults and teen women and while many people may be unfamiliar with Wicca traditions, many who identify as Wiccan are not completely open about it. They may keep it a secret to themselves and/or their family in efforts to not get backlash from people who have preconceived notions about Wicca. Many who are not fully aware of the practices assume the religion to be like what they see innaccurately portrayed in the movies. Wiccans do not worship the devil; in fact, their religion doesn’t even have a devil. Witches are not ugly and green with big noses and warts; they are everyday people who are spiritual healers.

Violet is a witch who has two children who share her beliefs. As her kids are growing up now, she tries her hardest to help them understand what other people do not. When their teachers at school don’t assign homework on major Jewish or Christian holidays, but do on theirs, her kids try to advocate for themselves. Not being understanding is a common theme and Violet does what she can to help the teachers be made aware. She has a pamphlet called “there’s a pagan in your classroom” that she shares with some she feels would be open to knowing what their beliefs are. While she doesn’t get a favorable response every time, some take it into consideration.

Not to be confused with witchcraft, Wicca and witchcraft are not the same even though those who practice Wicca identify as witches. Wicca is a worldview which has very identifiable beliefs, values and structure. There aren’t many distinct “rules”; each individual finds what works for them. The only real motto is “harm none.” Just like the prayers any other religion says, the spells Wiccans cast aren’t curses. The spells they perform are positive and life affirming just like praying for one’s health. Plainly stated, “witches are just ordinary people who use the powers to enjoy a good life.” There isn’t a church or synagogue to go to worship, instead each individual can go wherever they find most pleasing to them where they can connect to life and nature. 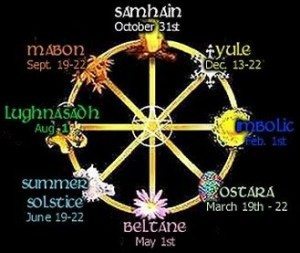 With Halloween just having passed, Wiccans too have a day of celebration. Celebrated from sunset on Oct. 31 to sunset on Nov. 1, Samhain (pronounced sah-win) is the most sacred day because it is the start of the new year. It is believed to be the time when the spiritual and material worlds have no barriers. There is open communication between the realms and people can celebrate their ancestors. They show the dead how they are grateful by leaving them treats. Reminded of trick-or-treating? This is where is came from. Just like a Christian Christmas or a Jewish Hanukkah, Wiccans have a holiday around the winter solstice, which is the day with the shortest amount of sunlight of the year. So every day after, there is a little more light to each day. Wiccans celebrate the rebirth of the sun by lighting a yule log. Around the spring equinox they have a holiday called ostara centering on the fertility of the earth, celebrating growth and new life blooming. This is where the eggs and Easter Bunny traditions originated in other cultures.
Wicca is a tradition founded in England that came to America and settled in Long Island first. Here, now, there are public festivals, workshops and classes for those interested in practicing the religion or those who are just interested in knowing more about who they are and what they do. There are online communities one can take part in, as well as covens of people who meet around certain new and full moons. For events in and around NYC, look up the NYC Pagan Pride Project.