The School Of Hard Knocks

The Community Foundation will work closely with sector leaders to understand evolving needs and gaps in funding.
Read more
Sports

Devon Cajuste, a Long Island native who was born in Syosset and raised in Seaford, became a household name in August after he appeared in the latest season of the HBO docuseries Hard Knocks, which gives NFL fans an up close and personal look into summer training camp. This season’s subject was the Cleveland Browns, and Cajuste, a tight end, became one of the main subjects on the show.

“When they first announced the show, I was like ‘cool,’” said Cajuste. “But, at the end of the day, we had to remain focused. Do your job. Do what you do. This didn’t change anything, but it was cool that we had an opportunity to share our story and that it would be good for the team.”

Cajuste was the type of underdog who was often times featured on the show. He went undrafted out of Stanford in 2016 but found a home with the San Francisco 49ers. He was cut right before that season but signed to the Green Bay Packer’s practice squad. After a year out of the league in 2017, Cajuste signed a contract with the Browns this past January.

Right as the show started on Aug. 7, we got to know about Cajuste’s hobbies and personal life. There were a few scenes that focused on his spirituality and the need to meditate to keep himself in a balanced state of mind.

“It’s a damn near priority to the job I’m in,” said Cajuste. “If I don’t have that, my world would actually collapse. It’s an every day routine. When I don’t do it on some crazy days, I start to get emotionally and physically unstable.” 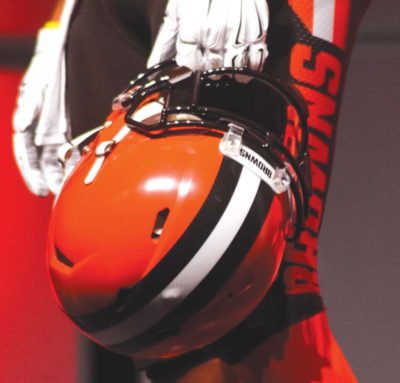 What made Devon’s story so captivating, however, was getting to know his dad, Gregory. It’s been a tough journey for the proud father, dealing with a series of serious health issues throughout his adult life. Despite a stroke, a tracheotomy, and multiple heart attacks, he is still fighting and making sure he gets to see Devon play on the NFL stage.

“Having him on the show was great,” said Devon. “It was good to get it out there to people that everyone goes through this kind of stuff and just because we are professional athletes doesn’t mean we don’t have to deal with tough situations.”

One of the more stunning moments on the show was when, while sitting next to Devon in an interview, Gregory revealed that he recently had another heart attack and that Devon didn’t know until he said it right then.

“I was in straight shock,” said Devon. “I didn’t really have thoughts. I was trying to focus on controlling my emotion. When I saw him, I knew the state he was in. I did not think he had a lot of time left at all. Seeing him every single day breathing heavy and it being difficult to do anything was just tough. To find that out at that moment, I just kept on trying to control my emotions.”

As Hard Knocks cameras were rolling, the Browns played in their four preseason games that would help determined who they should keep on their team and who should be cut. Cajuste performed well during the preseason, catching five passes for 101 yards in limited action. While it seemed like he had a good shot at making the roster, especially with a strong final preseason game, Cajuste didn’t want to get his hopes up too much.

“I honestly didn’t want to think that I would make it because if I put all my eggs in one basket, and then have this huge letdown, the feeling is not good,” said Cajuste. “That was never my focus at all. I just made sure I did what I had to do and let the decision be what it was. I would accept it no matter what.”

Unfortunately, that letdown came on Sept. 1, when Cajuste was told he was not going to make the team. The scene of him finding out was shown on Hard Knocks, as well as a FaceTime call with his father that was more lighthearted about the future than down on being cut again. And while his time in Cleveland was over, he enjoyed the opportunity the team gave him to play and the opportunity to tell his story on Hard Knocks.

“I definitely enjoyed my time on it,” said Cajuste. “I was able to share a story and make an impact on people. I shared a side of me that most other people don’t feel comfortable sharing. Being able to do that while playing the game I love was great.”

Since his time with the Browns ended, he has gotten calls from the Oakland Raiders and Washington Redskins, although both were looking to add him later this season. He may not play this year since he got shoulder surgery to get him healthy enough for an NFL roster again. In the meantime, he has built a website based around his use of energy crystals and meditation, which also includes making videos and T-shirts.

The best news of all for Devon? His father, after having a big surgery a few weeks ago, has not only defied death yet again but his health has greatly improved. He will be there for Devon whenever the next stop in his journey comes.

Catch Hard Knocks on HBO and at www.hbo.com/hard-knocks.