The Savory Side Of Chocolate

There’s the sweet tooth, and then there’s the meat tooth 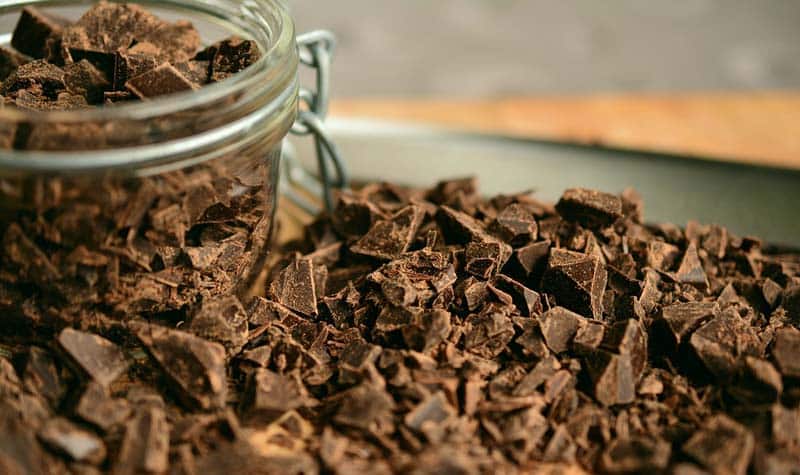 Every year around this time, you stock your home with as much chocolate as possible because you’re absolutely sure that despite all evidence pointing to the contrary, you’re going to have more trick-or-treaters than ever on Halloween. Well, prepare to be disappointed yet again. The sheer number of children—and no-good teenagers—trolling through neighborhoods in search of candy has been in a steep decline for at least the last decade. More and more parents are opting to take their kids to Halloween parties instead of allowing them to roam up and down darkened streets while miserable commuters speed down side streets as a shortcut to get home from work.

So what you’ll inevitably end up with is a surplus of candy that has tragically gone untricked and untreated. So what do you do? Well, if you’re like every other person over the age of 30, you’ll dump all that candy into a shopping bag, take it to your place of work, and drop it all in the communal area because you simply “cannot have all this candy around!” And you do this without considering that maybe your coworkers also don’t want to have all this candy around. You know, obesity is an ever-growing problem in this country, as is diabetes, and yet you thoughtlessly wave a Snickers bar under the noses of random people without thinking twice. Maybe the real monster wasn’t some costumed kid—maybe you were the real monster all along.

The point is, we’re all set to be sick of overly sweet chocolate this month and next. Instead of forcing candy upon coworkers, why don’t you take this opportunity to find out exactly how versatile chocolate can be?

Back when chocolate was known as the “food of the gods” early in its 4,000-year history, ancient Mesoamericans consumed it as a bitter beverage rather than the way we do—as a way-too-sweet concoction loaded with garbage like sprinkles and nougat. Anthropologists have actually found traces of chocolate dating back to the year 1900 B.C., with evidence demonstrating that it was cultivated from the tropical rain forests of Central America, before the cacao beans were roasted and ground into a paste that was mixed with water, vanilla, honey, chili peppers and whatever other spices they had lying around. The result was a frothy drink that brewers believed had aphrodisiac-like affects. I’m guessing the first chocolate-drink brewers were 100 percent men.

When Spanish explorer Hernando Cortez (“Cortez the Killer,” swell guy) came to the new world in the 1500s, he observed the popularity of the drink, which by then was being sweetened by the upper class. After a bit of murdering, pillaging and conquering—otherwise known as “exploring”—Cortez took chocolate back to Europe and eventually the sweetened version of it became immensely popular with the upper crust of high society.

And then, in 1819, a Swiss manufacturer invented the first chocolate bar.

Since then, we’ve crammed nearly every sweet imaginable into chocolate bars, while also managing to include a few salty food items. You see, somewhere along the way during chocolate’s journey, a forever-unknown industrious person decided to try taking chocolate back to its roots as a savory food item. And the many results of this endeavor are far more interesting than any candy bar you’ve ever eaten.

Incorporated in the right recipes and in the right quantities, chocolate proves that it doesn’t have to be relegated to the end of the meal. Let chocolate break free from the confines of decadent desserts and allow it to lend its silky complexity to savory preparations. There’s opportunities for chocolate in beef and bean chili; or as part of an espresso rub for ribs; or even a baba ghannouj using the usually deplorable white chocolate. Let’s roll through some of the more interesting savory chocolate dishes from around some of the top recipe sources on the internet.

From Saveur.com, a rack of meaty and fatty pork ribs has a run-in with belly-warming spices like cinnamon, allspice, ginger, and mustard powder. But it’s the inclusion of cocoa powder that delivers a depth of flavor that ribs have been missing for all these years. Also from Saveur, try your culinary hand at a triple chocolate beef and bean chili. Think about it—dark red-brown chili made even more dark and more red-brown with the inclusion of cocoa powder and semisweet chocolate. And on top of that, the recipe calls on you to add a complex bitterness with a chocolate stout beer to complete the chocolate triumvirate. Meat plays deliciously with chocolate, as its bold robustness is the ideal match for chocolate, which delivers layers of depth to the overall flavor.

The fine folks at the Food Network also deliver plenty of ways to make chocolate part of dinner. But perhaps their most interesting suggestion is chocolate fried chicken. The recipe  adds chocolate to the typical buttermilk brine, along with cayenne pepper for an all-around dizzying mix of sweet, savory, spicy, tender and juicy. But chocolate is not confined to brine, as the batter also includes cocoa powder, along with cinnamon, nutmeg and cayenne. The food of the gods, indeed.

There are many savory chocolate recipes out there besides the ones listed in this article. Browse around the Internet and find your favorite. Then do your coworkers a favor and opt to toss your leftover Halloween candy in the trash where it belongs.