The following is a book review of Master of the Game: Henry Kissinger and The Art of Middle East Diplomacy by Martin Indyk. 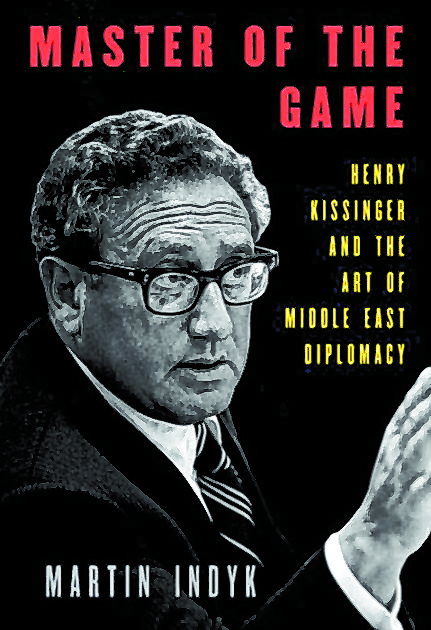 Henry Kissinger is approaching his centennial. Alert as ever, the interviews he gave to Martin Indyk provide for this book’s unique take on the Middle East peace process of the 1970s. By Richard Nixon’s second term, Kissinger had established himself as the voice of American foreign policy: A realpolitik view that resulted in the opening to China, a détente with the Soviet Union, the painstaking withdrawal from Vietnam, all complemented by his unlikely partnership with President Nixon, a man Kissinger barely knew before going to work in the Nixon White House.

Nixon’s second term was swallowed up by Watergate. Now Secretary of State, Kissinger took advantage of his new-found power by taking on the thorny issue of Mideast peace. His predecessor, William Rogers, was a longtime friend of Richard and Pat Nixon. This New York lawyer, however, was no match for Kissinger’s own vision for the region. The United States would have to take a long-term, extremely cautious policy: Diplomacy with Israel and its Arab neighbors, while displacing the Soviet Union as the dominant power, without humiliating Moscow.

A native of Germany, Kissinger’s early career focus was on continental Europe. Metternich’s “concert of Europe” was the lodestar. A prolific writer, Kissinger jumped into the Mideast cauldron with great energy. He wasn’t an expert, but he made himself one. Whenever Kissinger dealt with a foreign nation, he made sure to know its history, culture, heritage and religion, if not its language. Kissinger knew that history works differently on individual nations, a trait he shared with George Kennan, the man’s greatest contemporary. Kissinger was a most patriotic American. However, he knew that America’s peculiar brand of democracy was not necessarily transferable to the rest of the world. Both short-term and long-term peace was possible.

To Indyk, the story of Kissinger’s diplomacy was in credentialism. A besieged Nixon and a calmer Gerald Ford both wanted a big breakthrough, with peace bursting out all over the region. Kissinger knew that the Arab world was not ready to recognize Israel. A cessation of hostilities was the most the United States could hope for. Beginning in 1974, Kissinger was able to achieve just that, paving the way for greater achievements.

Throughout much of the book, Kissinger shares the stage with Egyptian President Anwar El-Sadat. Originally considered a lightweight, Sadat made his own bold moves that culminated with the Camp David accords. Sadat was no saint. And no pacifist, either. He knew that his 1973 Yom Kippur attack on Israel could not result in victory. It would, however, allow Egypt to save face from its earlier humiliation in the 1967 Six-Day War. The chapter on this war was the most gripping reading in Kissinger’s memoirs. It was the greatest crisis since Cuba in 1962 as American forces worldwide went on DEFCON-3 nuclear alert, the highest level of peacetime readiness, a level only two below DEFCON-1 (which meant nuclear attack) all to convince the Soviets to stay put. The reader relives that drama in Master of the Game.

Kissinger also had to convince Golda Meir not to annihilate Egypt’s Third Army once that unit was surrounded by Israeli forces. After his gains in the 1973 war, Sadat was able to make peace with Israel. The latter nation was more reluctant. After all, they had been attacked by the Egyptians. However, the administrations of Nixon and Ford had leverage and they used it. For Indyk, Israel’s decision to partner in peace with Sadat paid dividends.

With increased foreign aid from the United States, plus access to that nation’s cutting-edge technology, Israel was able to achieve both economic and military superpower status in the region.

Kissinger’s cautious approach remains the model for future peace. This book is densely written. In diary form, Indyk details the most minute points of high-stakes diplomacy, providing a definite history of the years leading up Camp David.