The Irishman: A Labor Of Love

When The Irishman debuted at the 57th New York Film Festival on Sept. 27, it was the culmination of a 12-year odyssey to adapt the 2004 Charles Brandt book, I Heard You Paint Houses. Directed by Martin Scorsese, the film stars Robert De Niro, Al Pacino and Joe Pesci and is about Frank Sheeran, a deceased labor union official who claimed to have killed Teamsters leader Jimmy Hoffa and mobster Joey Gallo. DeNiro read the book and after developing the script with production partner Jane Rosenthal, the duo’s interest in the book inspired longtime friend Martin Scorsese to become interested in directing a film adaptation of I Hear You Paint Houses. Steven Zaillian was hired to pen the screenplay and Irwin Winkler, who’d worked with De Niro and Scorsese on a number of prior projects (New York, New York; Raging Bull), was brought in by the director roughly eight years ago to produce this project. Shot on a $159 million budget, The Irishman took 108 days to film in various locations including New York City, Williston Park and Mineola. Given the principals involved and the scope of what was being attempted, Winkler admits the length of time it took to bring it to the silver screen was to be expected.

“It was about making decisions as far as getting the cast together. Then the decision to have the actors play all the ages from 30 to 80. Then finally starting to raise the financing, which was not easy for a film of that length and that budget. It just took a long time to get together and we of course did other stuff during that time,” Winkler explained. “Once we decided that we were going to do it, we had to arrange the schedules of the three actors and Marty [Scorsese] and get that all cohesive. Then we had to go through the process of arranging the locations for a three-and-a-half-hour movie. We literally had double the amount of scenes that a normal film has. That was the physical part. We had a great crew, but it takes time to organize, establish, build sets we couldn’t find and dress sets that we did find that weren’t perfect for the period. And Marty is very meticulous about all the details and about making it into something that’s real.”

The film’s premise follows a 30-something Sheeran as he starts out as a truck driver making money on the side by committing crimes and how he becomes a confidant of mobster Russell Bufalino (Pesci), eventually earning an introduction into the inner circle of Hoffa (Pacino). The span of time runs all the way up into Sheeran’s 80s, which wouldn’t have been so tricky had other actors been cast to play the younger versions of the film’s leads. But the decision to have De Niro, Pacino and Pesci play their roles throughout the lifespan of their characters via the use of de-aging special effects was made early on. 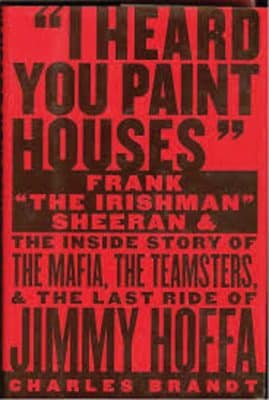 “We had a reading, maybe six or seven years ago, where Bob, Joe Pesci, Al, Marty, myself, Jane Rosenthal and all our principals came in to do a reading. Once you heard the script read, we knew we had something special and have the same actors play their roles throughout. It just leaped off the page. When Marty started directing, it became this whole other thing. And then he made it personal—he does what he does, which is take a good script and make it great,” Winkler explained. “Then we went to see a lot of studios and talk to a lot of visual tech people. ILM (Industrial Light & Magic) came in and we did a test. We took a scene from Goodfellas, where Bob De Niro was at the bar after a robbery, and we built a little set. We had the ILM folks come in and they did the same Goodfellas scene, with Bob doing it 25 years later. Then they worked it over. It took them a while to de-age him and then we put the two scenes side by side and you couldn’t tell the difference. That’s what really convinced us that we were on the right track. That of course cost a considerable amount of money, which set back our financing quite a bit and that’s part of what took so much time. But we didn’t want to compromise.”

For the film’s financing, a number of production companies were brought in before Netflix bought the movie rights for $105 million in 2017 and agreed to finance the movie’s budget. Given the recent friction between traditional movie houses and streaming services, negotiations were made to figure out how long The Irishman would play in the theaters before getting digitally streamed. The final decision was to go the limited-release route starting on Nov. 1 before Netflix picks up the film on its platform on Nov. 27. While not an ideal situation, Winkler admits it is part of the direction distribution is going nowadays.

“Most films play out in four weeks. We would like to have it playing in 3,000 theaters and so would Netflix. But the theaters really want this window of 72 to 90 days before they’ll allow it to be shown in any other medium of home video or home entertainment. That’s not Netflix’s business, but they met with all of them and they just couldn’t work out a deal,” he said. “So Netflix did something they hadn’t done before—they gave us a four-week window. In other words, we’re playing in theaters for four weeks. Unfortunately, we’re not playing in AMC and Regal, because they have their own window that they want to maintain.”

Pleased with the commercial and critical response, Winkler’s only regret is that the experience ended. Currently working with director/producer Ryan Coogler on a 2020 release for Creed III, the octogenarian movie mogul beams when asked about the satisfaction working on The Irishman gave him.

“For me, it was the coming together of a group of guys that hung together over the last 40 or 50 years. That was a great deal of fun and a tough accomplishment,” he said.

Previous articleWake Up Your Skin With A Feel-Fresh Approach To The Holiday Season
Next articleAbbondanza! An Italian-American style Thanksgiving