Mood swings, forgetfulness and hostility led to an EOFAD diagnosis that led to Moffett eventually institutionalizing his spouse before she succumbed to the disease 14 years later in 2010. The pain and anguish led to Moffett penning the self-published Ice Cream In the Cupboard, an account of his and his family’s traumatic journey that was adapted into a 2019 film of the same name. For the father of five, both projects serve as a public service to those dealing with the horror of EOFAD.
“The biggest takeaway [from the book and film] is that it’s possible to get this disease at a young age and it’s dangerous for the caregiver,” he explained. “If that’s the case. I’d like for them to learn how to protect themselves. I want to make sure that caregivers realize that their lives could be in danger from either being hurt by the loved one or the fact that they’ll run themselves down and die on their own.”

The film stars Dana Ashbrook (2017 Twin Peaks reboot) as Moffett, Claudia Ferri (AMC’s The Killing) as Carmen and Jaimie King (Pearl Harbor, Sin City) as Dr. Giselle Cohen. The movie opens with the future betrothed couple meeting while Moffett was on a sales call, where he mistakes his future wife as a secretary versus being the office manager of the company he was visiting. The narrative eventually leads to his wife having significant lapses in memory and lashing out about incidents that had happened years ago.

A number of scenarios were derived from real-life anecdotes including a scene where Ferri’s Carmen mashes a plate of cake onto her husband before storming off. In reality, this was adapted from a scenario where Moffett and his wife, who had been bickering at the time, escaped for a romantic weekend getaway to her Puerto Rican homeland where they were having dinner at a gorgeous seafood restaurant in San Juan. Dining on an outdoor veranda, Moffett was commenting on a number of vintage cars parked outside when his spouse suddenly hit him with a plate of steak and lobster forcefully enough to knock the 6’3” Vietnam veteran backwards off his seat while his wife stormed off. After chasing Carmen down and assuring local police everything was okay after he caught up with her, the couple returned to their hotel room. 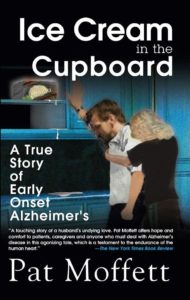 “Carmen laid down in the bed while I went out on the terrace and had four of the fastest cans of beer in my life,” Moffett recalled. “I was shaking from head to toe. I had no idea what just happened. Carmen came out on the terrace, said she was starving and asked when I was going to feed her. She wanted to know if we were going to go out to dinner. I said I tried that and that she threw food at me. She said she’d never do that to me and that I sometimes joke around too much. She also wanted to know how I got all that [crap] on my shirt. My mouth opened and I didn’t know what to say. We were on the first plane the next day. I never felt so alone because something was happening to me that I couldn’t imagine happening to someone else. I had no idea what this was. Like everybody else, I thought you got Alzheimer’s when you were around 80.”

Carmen was eventually diagnosed with EOFAD. As her condition deteriorated, the toll of being a caregiver started to take its toll on Moffett, his family and finances, as he had to cut back on his work hours and eventually had his spouse committed.
“When they put Carmen into a full-time center for three weeks, the doctors told me to stop now because I was a mess,” he said. “I’d lost weight and my heartrate was not good at all. Carmen was beating up other patients in the Alzheimer’s daycare center I had her in. This ate up my savings—it was $600 a week for the daycare center so I could go to work. She was just punching out 90-year-old people where we could have been sued. Both the center and family of the Alzheimer’s patient can be sued. These people understood and knew the disease, so we didn’t have to deal with that. That was a very difficult time.” 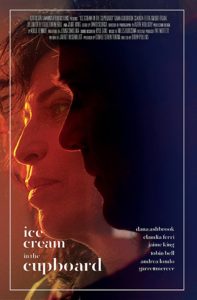 The film reflects the reality of EOFAD’s effects on the patient and their family in a way that’s led to it being positively received. It was one of 50 films chosen out of 6,500 entries at the 2019 Rhode Island International Film Festival, where it won Best Feature Film Narrative and the Best Feature Film Audience Award. While Moffett is proud of these accolades, he’s most satisfied by its portrayal of EOFAD.
“The other films that have been done on Alzheimer’s—The Notebook, Still Alice, Away From Her—were excellent movies with terrific actors, but they missed the mark on the violent behavior,” he said. “I think they missed the mark because they barely have any agitation in them. That’s why I think Ice Cream in the Cupboard takes it up a notch in terms of what really goes on in that Alzheimer’s world when it comes to the violent behavior.”

Ice Cream In the Cupboard can be viewed on Amazon Prime, Google Play, Xbox, YouTube and iTunes/Apple TV.