This season the John W. Engeman Theater presents Sunset Boulevard, an Andrew Lloyd Webber musical based on Billy Wilder’s Academy Award-winning 1950 film of the same title. The plot revolves around Norma Desmond, a faded star of the silent screen era, living in the past in her decaying mansion on the fabled Los Angeles street. When young screenwriter Joe Gillis accidentally crosses her path, she sees in him an opportunity to make her return to the big screen. Romance and tragedy follow.

“Now that there are talkies in the films, she wants to come back and be a part of Hollywood again,” McLane said. “She’s been out of it for quite a long time. An aging film actress…which is taboo.”

She added, “There are a lot of surprises in the show. I think people like to be surprised in the theater and that’s very exciting. So every turn he keeps you on your toes.’

The opening scene is quite a shocker and grips the audience with questions right away.

“I think that audiences, once you put them in that world, they are totally willing to go there,” said Bryant Martin, who plays Joe Gillis. “And that’s really exciting to be able to be a part of that.” 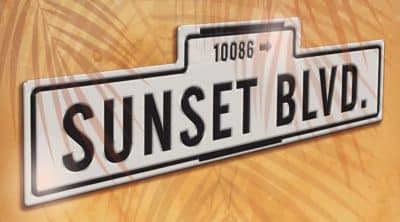 Sarah Quinn Taylor plays Betty Schaefer, a script editor who suggests to Joe that they collaborate.

“Betty provides a lot of the comic relief of the show, but more, she’s the young ingénue and the love interest of Joe,” Taylor said. “I love the Paramount Studios sequence….The set and costume design is so rich and full, and really envelops the audience into that world.”

David Hess plays Max von Mayerling, Norma’s loyal butler and chauffeur who was there to witness her rise to stardom.

“He’s there to remind everyone what a gift Norma Desmond was to the world,” Hess said.

He added, “This is a very personal, very rich story that deals with relationships and what happens later in life when we start to lose our powerful position in life. And I think people who come to see the show will be surprised to see how much they might be affected by it on a very personal level.”

With its much-loved score—“Sunset Boulevard,” “With One Look,” “As If We Never Said Goodbye,” “The Greatest Star Of All” and “The Perfect Year”—this production promises to be a spectacular event.

View the video above for featured interviews with the cast and clips from the show.