The Death Of The Death? 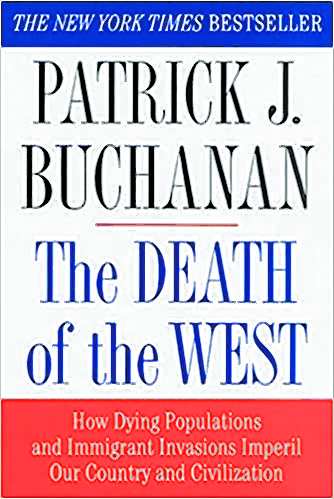 When Patrick J. Buchanan ran a poor fourth in the 2000 presidential election, his career seemed over. Critics forgot that Buchanan could also turn to his syndicated column, The McLaughlin Group—and his manuscripts. Already the most controversial columnist in America, Buchanan had embarked on a new career, this one as a best-selling author. What is his greatest book? Churchill, Hitler and The Unnecessary War: How Britain Lost Its Empire and the West Lost the World, a 2008 best-seller and a most thorough one-volume history of World Wars I and II and their implications for world history, is his most accomplished volume. The reader can never look at the 20th century the same way again.

Buchanan’s most famous book was released 20 years ago. When The Death of the West: How Dying Populations and Immigrant Invasions Imperil Our Country and Civilization was published, it was met with the usual invectives. The public, however, snapped it up and the book rode on the best seller lists for months. This author recalls going to the Manhasset Barnes & Noble and seeing a stack of the new volume on display. A few days later, that stack was plain empty.

The thesis was simple: The world of Europe and North America was on an inexorable path to suicide, felled by the one-two punch of low fertility and high immigration from the global South. The former is undisputable, the latter is where the name-calling sets in. As the 21st century reaches its quarter mark, The Death of the West remains the book of the new century. We’d love to hear of a rival.

The Death of the West can be read as a sequel to The Unnecessary War, even though it was published six years before the latter book. World Wars I and II marked the end of the European era in modern history. The consequences were not just the loss of empire, but the boomerang effect: residents of the former colonies flocking, as it were, to the mother country.

Then there’s low fertility. Buchanan, ever the Catholic traditionalist, pins it on the disappearance of the West’s Christian inheritance. In Western Europe and North America, the rout of Christianity has been so thorough that it is impossible to believe that Europe, for centuries, was known the world over as Christendom. When European nations drew up the European Union charter, their sweep of history failed even to include Christianity, a decision that proved greatly upsetting to Pope John Paul II.

The world of indulgence was in Buchanan’s sights. Who can forget the passage in which a young British woman gloats over being childless?

“If I had a kid,” said Jane, an advertising executive, “I wouldn’t be able to do half the things I take for granted. Every Saturday at 10:30 a.m., when we are still in bed, my husband and I look at each other and just say, ‘Thank God we weren’t up at 5 a.m. caring for a brat.’ We have such a great time just the two of us; who knows if it would work if we introduced another person into the equation?”

On the question of religion, Buchanan also trained his sights on the Frankfurt School. Such long-forgotten figures as Georg Lukacs, Max Horkheimer and Theodor Adorno were cultural Marxists, seeking to end Western civilization by de-Christianizing Western culture.

The loss of Christian faith went further. Christianity puts an emphasis on self-denial. One lives for others. How could that religion (and others) survive the onrush of modernity? With rapid advancements in science and technology, Western peoples now lived in a world of unimaginable ease and comfort. “Men seek to live for themselves,” Leo Tolstoy observed in War and Peace. In the modern world, all this was now easily possible. Why wake up at 5 a.m. “caring for that brat?”

On the fertility question, Buchanan paid too little attention to economics. Having one or two children in today’s world is the equivalent of having two or three in the Baby Boom era of 1945 to 1972. Young couples are saddled with federal, state and local income taxes, not to mention a Social Security and Medicare bite, the ever-more ridiculous heights of college tuition and for Long Islanders, the property tax bite which goes without further commentary. Buchanan did mention tax credits to allow couples to have more children. The loss of faith remained his focus.

The Death of The West was a publishing sensation, a book so explosive that liberals in Great Britain wanted it banned in that country. In 2003, when the United States and Great Britain invaded Iraq, any death of the West seemed obsolete. Secular Western values would reign supreme in Afghanistan and now Iraq, spreading to one nation after another in the Muslim world. Liberal democracy faced no opposition. The United States would rule as the planet’s unipolar power.

Those heady days are gone. With rise of China and a sectarian Islam, liberal democracy is now in defensive mode, the Russo-Ukrainian War being only the latest crisis. The focus remains on Europe and North America. The right-wing populist campaigns of both Buchanan and Ross Perot fell short, as did Donald Trump’s presidency.

The same, however, has not been the case in Europe. A stark divide between Eastern Europe and Western Europe, plus North America tells a story of the early 21st century. Populist parties have been triumphant in Poland, Hungary, Czech Republic, Slovakia, Serbia and in such central European nations as Switzerland, Austria, and Denmark; even Scandinavian Norway. The populist wave has not reached Western Europe and North America, although Italy may elect a right-wing populist coalition in 2023. Then there’s France, where the combined vote of Marine Le Pen’s National Rally and newcomer’s Eric Zemmour Reconquest party should exceed that of President Emanual Macron in the first round of next month’s national election. France, at this writing, is headed for an historic April 24 run-off election.

The Death of the West has enjoyed a remarkable history. Just its publication released physic airwaves. Such nations as Hungary and Poland have enacted generous tax credits allowing women to bear more than one child. If a woman in Hungary bears four children or more, her family pays no income tax at all. When Barack Obama was president, he proposed a $3,000 tax credit per child for couples with more than one offspring. The Republican Party majority wouldn’t even consider such legislation.

Contrast that with Russia, now more than ever, a pariah nation. In that country, a woman gets, in American dollars, an $11,000 tax credit for each additional child. The United States, we must add, is a significantly wealthier nation than Russia.

As the new century moves towards the year 2025, we can divide the West into suicide nations and survival nations: Those in Eastern Europe that close their borders and give tax credits to young couples wanting to have children and the wealthier Western Europe and North American nations which remain asleep at the switch.

In the second half of the century, China and India are likely to jockey over global supremacy. The centuries of Western dominance are over. The real question remains: how much of the classical West survives at all?