The AFL: The League That Roared

When the American Football League (AFL) took off in 1962, no one could imagine that by the end of the decade, that upstart league would not just be the equal of the mighty National Football League (NFL), but that its free-wheeling style would make it the most exciting of the two.

The Super Bowl, inaugurated in 1967 after the merger of both leagues, was simply a showcase for the NFL to prove their superiority. Indeed, in the first two games, the Green Bay Packers, coached by the legendary Vince Lombardi, steamrolled two AFL teams, the Kansas City Chiefs and the Oakland Raiders. NFL supremacy looked to continue in 1969, when the Baltimore Colts were heavy 18-points over the New York Jets. Along the way, Joe Namath guaranteed a victory and that is exactly what happened. The Jets’ 16-7 win was a shocker. The next year, the Chiefs came back to dominate the Minnesota Vikings in the final game before the merger. Now it was the NFL teams that had some catching up to do.

How did it happen? How did the AFL go from being a rag-tag bunch of teams, many of whom could barely pay their bills, to surpass the league of George Halas and Vince Lombardi?

First, there was the popularity of professional football. America in the postwar years was becoming a television nation, and football, with its constant down field action, was meant for television. Second, with the GI Bill for World War II veterans, more men were enrolling in college and universities. College football would also take off. 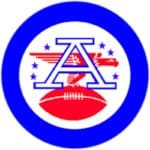 Finally, there was the thrilling 1958 NFL championship contest between the New York Giants and the Baltimore Colts. In 1959, oil magnate Lamar Hunt wanted his own pro team for Dallas, TX. The NFL balked and so, Hunt and his fellow millionaires formed their own league. The 1960 AFL originally had eight teams, including the long-lost New York Titans. More important was that it had a television contract, first with ABC and later, NBC. Plus, the league was colorful, placing a premium on offensive displays. Finally, the league nailed the game’s biggest star of the 1960s. Even in college at the University of Alabama, Joe Namath was a colorful figure. He made news by missing curfew for the 1964 Sugar Bowl game in New Orleans and being benched by Paul “Bear” Bryant. Namath came back in his senior year to lead the Crimson Tide to an Orange Bowl appearance with the University of Texas. The Longhorns won that game and the national title, but Namath engineered a fourth-quarter drive that nearly won the game for Alabama. After his senior year, Namath was drafted by both the St. Louis Cardinals of the NFL and the New York Jets, now set to play in Shea Stadium. St. Louis or New York? It wasn’t even close. Namath was meant for New York, complete with a $400,000 contract, an East Side bachelor pad with llama rugs, Fu Manchu mustache and stories of blondes, brunettes and redheads.

The AFL became an offensive bonanza for fans both at the games and watching on television. In addition to Namath, it featured such stars as Lance Alworth, Jon Hadl, Jack Kemp, Cookie Gilchrist, Elbert Dubenion, Abner Hayes, George Blanda, Don Maynard, Lionel Taylor, Charlie Hennigan, Keith Lincoln and Darryl Lamonica. On defense, the 300-lb. Ernie Ladd was a phenom as was Oakland Raider Ben Davidson. Namath and Davidson sported competing handlebar mustaches, while the Jets and Raiders had their own interleague rivalry. In a 1968 game, the Jets held a lead over Oakland, while playing on the road. The clock for the nationally-televised game spun towards 8 p.m.,when NBC was set to show a prime time Heidi movie. By 8 p.m., the game was still on. NBC producers cut to Heidi and dropped the game. The Raiders promptly scored two touchdowns to win a game now driven off the air. It was all part of the zany history of the AFL.

The NFL-AFL merger happened because Hunt made sure his fellow owners were wealthy enough to win bidding wars such as the one that snagged Namath for New York. The league also used a narrower and longer ball, which made the pigskin easier for passing, hence the weekly offensive fireworks. Most of all, there was the question of signing players. The two leagues had a gentleman’s agreement: Once a player signed with a team, that was the end of the bidding. Owners in both leagues were not expected to sign players under contract. That was broken in 1966, when the New York Giants signed place kicker Pete Gogolak, who previously was under contract with the Buffalo Bills of the AFL. Bad move. AFL owners immediately went after such NFL stars as John Brodie, Mike Ditka and Roman Gabriel. The NFL sued for peace and the merger, which had been bantered around since the early 1960s, was agreed on by June 8, 1966.