Review of: Crossroads by Jonathan Franzen 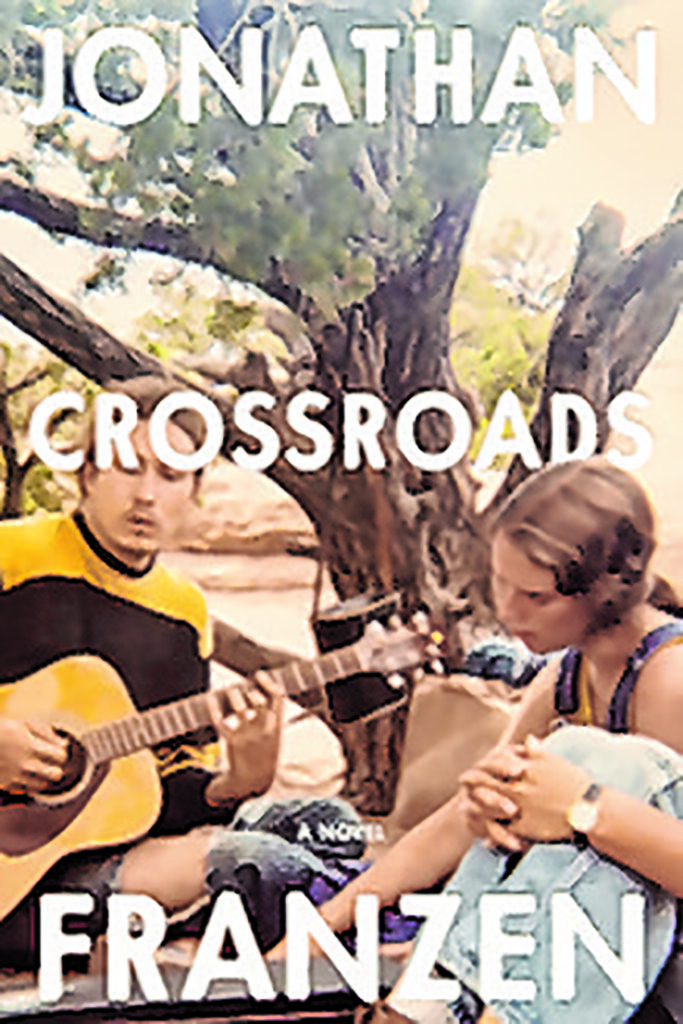 The novelist Jonathan Franzen is a bird watcher, so much so that he published a book on his passion, The End of the End of The Earth. While celebrating bird life, he proclaimed that we humans should stop having children. Second thoughts? His latest novel, Crossroads, is about a postwar couple, Russ and Marion Hildebrandt who are right in step with that fecund era, raising now a family of three boys and girls.

The novel is a story of liberal Protestantism, early 1970s-style. Russ Hildebrandt, a reverend at a suburban Chicago parish, holds the usual amount of nostalgia for the antiwar, pro-civil rights era of the 1960s. That decade is over. The war in Vietnam is winding down. In the Sixties, the country ran off track. What would the new decade bring? Would the country go back on track or continue to indulge in the liberation ideology of the previous decade?

Set in suburbia, the novel takes the predicable journey into John Updike territory. Russ is bored with his “joyless” marriage. He takes up with a female parishioner. His wife, in turn, travels to California, ostensibly to meet relatives but with the real objective to countering Russ’s adultery with an affair with an old flame. Her former lover is now old and flabby and balding. In his life, Russ has only been with one woman. Marion has been with two. He wants to catch up. The couple’s middle-aged angst is predictably boorish. Do we need more novels on this worn-out subject?

The drama comes from the couple’s children. Clem, the oldest, feels guilty about his college deferment that allows him to avoid Vietnam. His girlfriend has an older brother in southeast Asia, plus Clem’s father was one of those rare conscientious objectors during World War II. To his girlfriend’s dismay, he wants to enlist.

Becky Hildebrandt is the All-American girl, a popular cheerleader all with an admiring folk musician boyfriend in tow. Judson is too young to be part of the family drama, but his older brother, Perry, upsets the entire apple cart. A bright high school student, he also deals in narcotics. On a church trip to an Indian reservation in Arizona, he discovers peyote and dreams of creating his own peyote empire selling the drug to Chicagoland’s hippie population. Along the way, Perry gets in trouble with the law and then tries to hang himself in a jail cell. That shocker pulls his parents back together. The legal bills to bail out of the young man also take a bite of the Becky’s college tuition savings. Her life, too, is off track.

Crossroads is a solid portrait of early 1970s America. In a time of great restlessness, young people did not necessarily take the high school-to-college route. College dropouts were numerous. Middle class youth hit the road, joining the ranks of the working-class. Which way, America? Well, the country couldn’t make up its mind. The lure of Sixties-style liberation ideology, then and now, proved irresistible.

Clem and Becky confront adulthood. The older brother leaves a heartbroken girlfriend. However, the draft board rejects his enlistment idea and so the young man travels south to work with peasants in Peru before finishing college and joining the middle class.

Bereft of tuition money, Becky joins her musician boyfriend on a European tour, where she promptly gets pregnant and happily married. Clem achieves adulthood not through the service, but instead through hard labor in the fields.

The children are more admirable than their parents. Becky’s private prayer sessions are both intense and believable. Being a Christian gentlelady is her goal in life. The reader roots for her and for Clem to redeem their parents’ behavior. Crossroads is being advertised as the first novel in a planned trilogy. It is also a happy-ending novel, full of hard-fought victories. Russ and Marion escape suburbia for a parish in rural Indiana. Becky’s Christianity is sincere. Clem’s breakup with his girlfriend, Sharon, makes him a less attractive figure. Perry’s health problems apparently will set up plots for coming volumes.

Franzen’s project is off to a good start. The major characters confront their dilemmas and seek to overcome them, proving again that all good fiction is a highly moral enterprise.