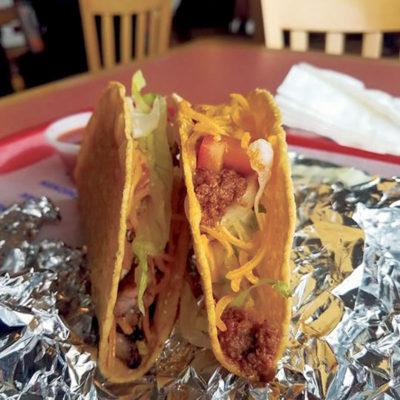 A couple of years ago, some enterprising eater gifted the world with the taco emoji—a cartoon icon that deftly illustrates a love of tacos through text messages. Now, a gentle touch of the screen can express exactly what we need when the perils of life get us down.
Tacos. We need tacos.

There has been an influx of authentic Mexican eateries over the years, offering traditional tacos on soft, corn tortillas with an array of meat that never includes ground beef and topped with chopped white onion and cilantro, but never with lettuce, tomato and only sometimes with cheese.

Authentic tacos are good, but that is not what this article is covering. Here, I want to talk about Americanized tacos stuffed with beef (and, sure, chicken), cheese, sour cream, diced tomatoes, lettuce and served in a crunchy shell that almost always falls apart with the first bite.

Seeking out these nontraditional tacos, there are few places that do it better than Taco King at 480 Hempstead Tpke. in West Hempstead. Highbrow purists might thumb their noses at Taco King, calling it inauthentic and below their lofty standards. These people are either liars or needlessly depriving themselves of one of life’s simple pleasures.

Many steps above fast-food behemoth Taco Bell in terms of freshness of ingredients and attention to detail, Taco King doesn’t delve into taco assembly lines with sour cream caulking guns, novelty shells made from Doritos or some other gimmick dreamed up by the Taco Bell braintrust.

Taco King is all about the no-frills experience of eating four or five tacos in one sitting—the crunchy explosion that occurs with each bite, filling the foil below with enough taco runoff to fill another whole taco. The options are straightforward at Taco King: black bean, pinto, chili (ground beef), chicken, skirt steak, pulled pork, shrimp, steamed vegetables and a fajita variation that adds onion and pepper to the mix of any taco.

The structural integrity of the tacos is helped by cheese, which holds the shell together in some spots. The meats are surprisingly well-seasoned for this type of eatery, with the chili standing out in flavor and spice. Taco King also earns high marks for using skirt steak in all of its steak preparations, including the tacos. Meanwhile, the chicken boasts a char that brings unexpected depth to the simple, hand-held meal. There are also burritos, quesadillas, rice bowls, platters, nachos, salads and one-pound fajitas on Taco King’s brisk menu. If you are into soft tacos, Taco King makes its flour tortillas daily, baking each per request for freshness. This gives the eatery’s burritos an extra element of grandeur with each pillowy bite.

Also, the prices cannot be beat, especially on Taco Tuesday when tacos are priced at a delightfully paltry 99 cents. That means one could potentially spend less than $10 for 10 tacos—thanks, math.

and get the word out—tacos are the supreme ruler of fast, portable food, and nowhere is that more true than at Taco King.