Is It Safe To Go To The Doctor For Routine...

In a mid- and post-pandemic world, there is a lot to consider when making appointments for routine doctors’ visits, like having your eyes checked...
Read more
David Bernstein - The Specialist

Viral hepatitis is common and the best-known viruses causing hepatitis are types A, B and C. Little known, but important, is delta hepatitis or...
Read more
Home Improvement

Energy efficient windows are an important consideration for both new and existing homes. Heat gain and heat loss through windows are responsible for 25...
Read more
Profiles in Medicine

Hepatitis B: Don’t Forget Me

In the world of COVID, hepatitis B, a common and potentially deadly virus, should not be forgotten. It can cause both acute and chronic...
Read more
TOP STORIES

Post-surgical recovery during a pandemic 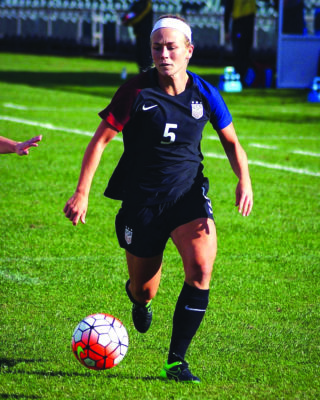 With two totally reconstructed knees over the course of her sports career, one being reconstructed just over a year ago and one due to a high school injury, Shannon Horgan already cannot wait to get back on the field.

“There is no doubt,” said Horgan. “I am currently recovering as if I will be back playing soccer professionally.”

Horgan, a soccer player from Long Beach, played for Clemson Tigers (2014-2018) before playing professionally for Sweden in Lidköping.

After her season, she was scouted by North Carolina Courage where she played and was part of the winning team (the National Women’s Soccer League championship in 2019).

“With the minimally invasive and advanced technologies, we were able to get her back on the field once to have a collegiate and professional career, before she had to repair the other knee,” said Dr. Eric Freeman, an orthopedic specialist at South Island Orthopedics in Cedarhurst.

Horgan tore her anterior cruciate ligament (ACL) and meniscus, the cartilage in the knee that acts as a cushion for the bones, while playing soccer at Wagner College. It’s one of the highest risk injuries for female soccer players and usually requires a six- to nine-month recovery. She has been temporarily coaching the collegiate female soccer team while taking a break from professional soccer due to another injury.

“I have flown out of the gates post-surgery and I am currently two weeks post-op, walking on the treadmill,” said Horgan. “I am also already gaining muscle back because I’ve been performing my physical therapy exercises frequently at home.”

She said it is important to maintain consistency with exercises so her knee does not get stiff.

“Individualized care is important,” said Freeman. “The weekend warrior is every bit as important to take appropriate care and treatment as an elite athlete.”

Horgan said waking after surgery and not having anyone familiar with her was the only negative that she has experienced with having a elective surgery during the pandemic.

“Luckily, I have been able to go to my well-known physical therapist that I have worked with before,” she said. “They are frequently working to keep the gym clean and require masks.”

“There were a lot of surgeons during COVID that were doing surgeries that they deemed emergencies that were truly not emergencies,” said Freeman. “I have predominantly an elective procedure and I really felt ethically it was inappropriate for me to be operating in any capacity, so I shut down.”

He said his business has returned back to normal finally, although things have changed with the logistics of keeping the patient, as well as the surgical staff safe during the pandemic.

Freeman has been in Cedarhurst for 20 years. He has served as chairman at Mercy Hospital (2012-2016) and has recently acquired Orthopaedic & Sports Associates of Long Island (OSALI) in Woodbury.

“The acquisition was very exciting for us because we were able to acquire a practice with a wonderful reputation to give us a North Shore presence,” said Freeman.

The practice has its own MRI, physical therapy and pain management suites.

“For patients who are ambivalent about going to external facilities for therapy, MRI and pain management,” said Freeman. “Especially during COVID, the ability to offer every service all under one roof really reassures patients that they don’t have to go elsewhere for every type of service.”

“I personally take care of patients of all ages, down to the age of two, but now we are going to be able to provide complete orthopedic coverage from neonatal and newborns all the way up to geriatrics.”

While off the field, Horgan coaches collegiate teams at Wagner College and is also a youth coach on Long Island through her self-founded soccer training company Celestial Body.

“I am keeping connected with some international coaches and looking forward to the opportunities that come my way whether it is on the field or on the sideline,” said Horgan. “Right now the focus is just on getting better each day.”