Before the railroad began to wind its way through the quaint villages of the North Shore, the major source of transportation was the sidewheel steamboat in the early 1800s. Steamboat service ignited the luxurious and bustling Gold Coast-era of Long Island. Water travel was the only way to get from Manhattan to Long Island. The Brooklyn Bridge would not be built until 1883. 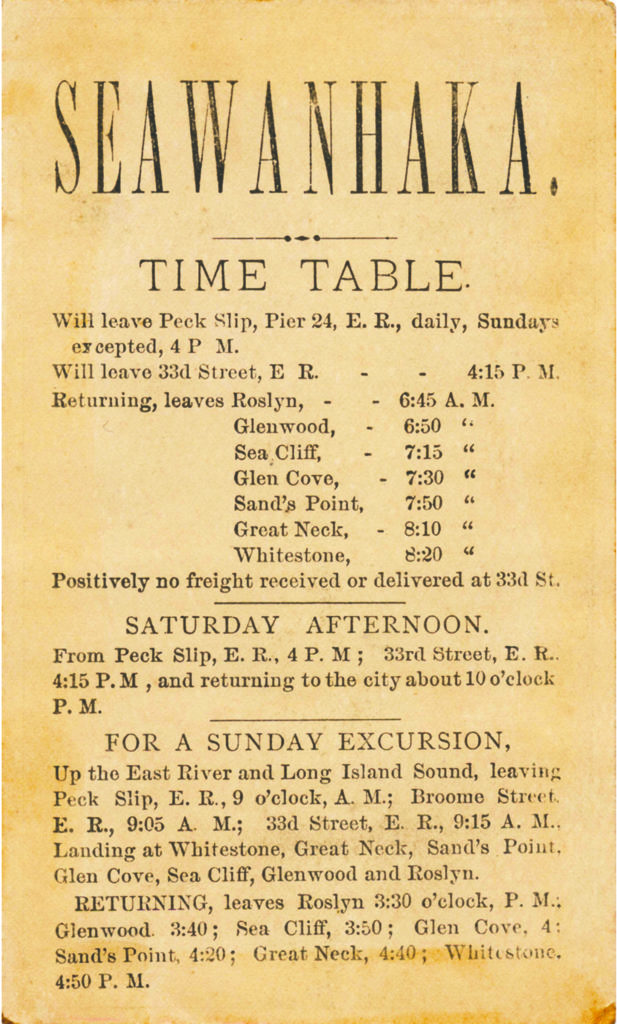 In 1827, Dr. Thomas Garvie negotiated with Cornelius Vanderbilt to begin a regular ferry service between his proposed dock facilities at Garvies Point in Glen Cove and Manhattan. The first steamboats evolved from the engineering of Robert Fulton’s 1807 design for the first practical steamboat, the Clermont.

The Linnaeus, captained by Elijah Peck, was one of the first recorded steamboats to provide service to the North Shore in 1829. The Linnaeus was a small steamboat in comparison to the size of the ships that would eventually operate on the line. She left Glen Cove every morning at 6:30 a.m., stopping at New Rochelle at 7:30 a.m., Whitestone at 8:30 a.m., before finally arriving at the Fulton Market slip. She return-voyaged every afternoon at 3 p.m. Fare one-way was a mere three shillings (one shilling would equal a small fraction of today’s penny).

For the first time, there was reliable and convenient travel from Manhattan to Long Island. Before the arrival of steamboat service, travel by water had been by sloop, a one-masted sailboat, which was much slower than steam, dependent on wind, tide, weather and was far less dependable.

To handle summer vacationers, Glen Cove, Sea Cliff and other resort villages along the coast erected their first hotels, resorts, taverns, clam bars and oyster houses. The arrival of steamboat service encouraged wealthy Manhattan businessmen to purchase North Shore estates as their summer homes, while still being able to commute back to the city to manage their business affairs. The Pratts, Morgans, Woolworths and Guggenheims, all took homes near steamboat landings.

In 1873, when the Sea Cliff Hotel was nearly complete, a new line of steamboats, including the T. V. Arrowsmith, made two trips a day to Manhattan. Fare was 35 cents and commuter books were available for frequent travelers. 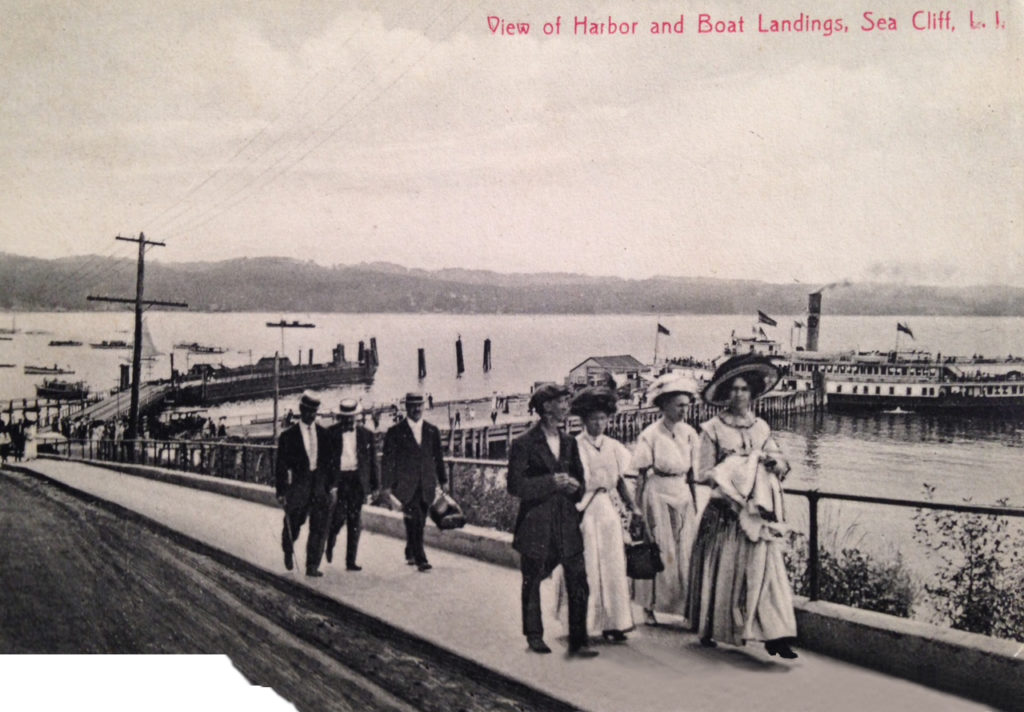 The Idlewild reestablished service following the loss of the Seawanhaka. Some claim the Idlewild was the last steamboat to service the North Shore, possibly running until 1908, but a news article in the Glen Cove Echo, dated June 3, 1916, announces the final discontinuation of steamboat service to be made by the Sagamore.

The Long Island Railroad formed in 1834, but only arrived as far as Glen Cove in 1867, slowly replacing all of the coastal steamboat service. The railroad service did cost more, but was safer. Within a half of a century, rail had replaced the steamboat service.