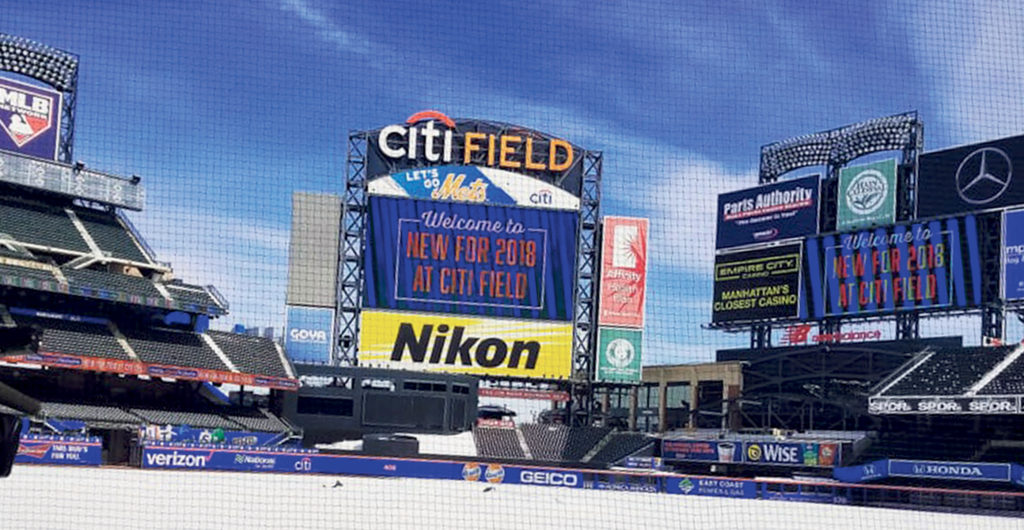 With spring comes baseball and with each new major league season comes a return to culinary grand slams at the home teams’ stadiums. Each year, the New York Mets invite members of the press to tour Citi Field and sample new and returning concessions. The media day is always a hot ticket, with scores of working reporters and writers descending upon Flushing for a guaranteed free meal. This year was no different.

After a sneak peak at the new First Data Club, a premium food and beverage space for fans seated behind home plate, and a preview of the renovated Citi Pavilion above the bullpens and next to Shea Bridge—as well as the reveal of New Balance as the official footwear and apparel company of the Mets and Citi Field—a curtain was pulled to unveil rows of food vendors along with samples of ballpark grub.

Here’s a lineup of some of the best in food at Citi Field—with new additions and tried-and-true favorites.

An off-shoot of the Southern-style Sweet Chick NYC, Lil’ Sweet Chick lands this year at Citi Field with three items at the counter: Lil’ Chicken & Waffles, OG Fried Chicken Sandwich and a Nashville Hot Sandwich. The chicken and waffles is a boneless, slightly portable version of the brunch classic, with honey butter and maple syrup. The OG sandwich is crisp, down-home style chicken with heirloom tomato, lettuce and herb mayo, while the Nashville kicks with a special spice blend and bread-and-butter pickles. Bet on long lines at this concession at the Jim Beam Highball Club on the Promenade Level behind home plate.

Citi Field’s original fried chicken sandwich—the one that’s earned high praise for a few seasons now—is Fuku, with its habanero-brined thigh, along with pickles and Fuku butter on a soft bun. The decision to go with the thigh cut makes all the difference, as that particular part of the bird offers a wallop of juiciness, highlighting exactly why this sandwich is so popular at the park. Fuku also serves jalapeño and ranch popcorn and loaded fries with spicy cheese sauce, ranch, bacon and scallions. Located in section 102, next to the Shea Bridge.

Catch Of The Day

The seafood-forward concession swam into Citi last season and it returns this year with a few reel big catches. Topping the list is the South Bay Lobster Tacos, with Maine lobster and sharp jack cheese on a white corn tortilla with cilantro-lime creme, citrus slaw and queso fresco; and the loaded lobster fries, again with Maine lobster, lobster fondue (yes, please), roasted tomatoes, chives and a return of the cilantro-lime creme. While the lobster isn’t served in big, juicy chunks, the unmistakable lip-smacking flavor does shine through. Swim upstream to section 102 for this one.

The pride of Wisconsin brings its brats and artisanal cheeses to various city markets throughout the year, but this is its first go-round at Citi Field. The concession will serve a foot-long Alpine Brat smothered in melted raclette cheese on a baguette. The assembly of this item is truly poetic, as a large half-wheel of cheese is heated with a flame before it’s tilted and the cheese is seductively draped and spread onto the long crusty bread. Oh, mama. Belly up to the Jim Beam Highball Club for the foot-long fix.

These are not your average mozzarella sticks, and that is why Brooklyn-based Big Mozz is back for a return engagement at Citi Field. These hand-breaded creations are larger-than-your-average-sticks and pack a sharper flavor punch as well. The creators of this crunchy, cheesy item mix garlic, parsley and Pecorino Romano cheese into the batter, making an all-around more dynamic mozzarella stick than practically anywhere else. These sticks also provide a major league “cheese pull.” Get Big Mozz in the Jim Beam Highball Club, formerly the Promenade Club.

The Citi Field original returns this season with a new item worth trying, the Chicken Roll. Not the typical pizzeria “chicken roll,” the Box Frites version features fried chicken cutlets served on a potato hot dog bun with a Parmesan sauce and spicy peppers strewn across the top. A decidedly Italian alternative to the ballpark dog, the crisp chicken combines with the parm sauce for an intriguing bite, while the peppers will definitely bring some moisture to the brow on a hot summer day. Find them at section 140.

This entry comes from the high-end portion of the ballpark—no, not the bleachers, instead this is from the fine-dining leaning Porsche Grill. The smokehouse ribs, hardwood-smoked pork ribs, are one of the best bites at Citi Field. These beauties boast everything great ribs should; smoky (check), messy (check), bites cleanly off the bone (check). Eating in this section require specialty access—but, you only live once. The Porsche Grill is located in the left field corner of the Excelsior Level.

The purveyors of edible cookie dough return to Citi Field for another season, bringing all their signature flavors including Cookies & Cream, 7th Inning Stretch (sugar cookie dough with Cracker Jacks and peanuts) and Peanut Butter Brownie, along with a few more offerings. While this is a great dessert, the line at the stand can get rather long during the late innings. Fully astute ballpark eaters know to get their dessert fix at DŌ early in the game, then head for the more savory treats. Although now I’ve said too much. DŌ can be found in the Jim Beam Highball Club.

Rounding out the rotation: