Sept. 25, 1987 is a momentous date in Ricky Byrd’s history. It marks the first day of his drug and alcohol recovery journey—a daily task he grapples with every time he wakes up. While it would have been easy for the former Joan Jett & the Blackhearts guitarist to concern himself with his sobriety alone, he’s instead made it his mission to reach out and help those struggling to stay clean.
The Bronx native’s drive to help fellow addicts led to his diving into a four-day-a-week, five-month training program to become a substance abuse counselor in training and certified recovery coach. Byrd also recorded two albums composed of songs that “…deal with addiction, recovery, hope and change for the better,” he said. The first outing came via 2017’s Clean Getaway followed up by the recently released Sobering Times. A true family affair, this project, like its predecessor, features photographic contributions by college student daughter Frankie. Byrd also made both albums 12 songs long (“the same number as a certain recovery program”) and made sure both releases follow a distinct theme.
“Each one of these songs speaks to some aspect and angle of either addiction or recovery,” Byrd explained. “I try to have a solution at the end of each song and try to be positive. On this record compared, to the last one, I tried to widen the path of what the messages were. Part of it is business—I wanted to get some airplay too. I don’t mention drugs or alcohol at all. It’s about getting knocked down, getting back up and coming back stronger.”
A rock and roll die-hard dating back to the first time he saw the Rolling Stones and Beatles on the Ed Sullivan Show as a 12-year-old who decided that’s what he wanted to do with his life, Byrd describes his material as “…a product of what I listened to between the ages of 13 to 20 style-wise.” 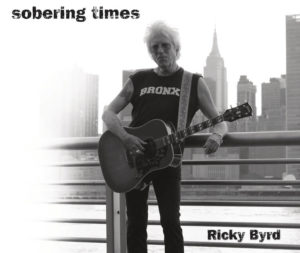 Sobering Times finds Byrd reteaming with bass-playing co-producer Bob Stander and penning songs with a number of longstanding collaborators including Aerosmith songwriter Richie Supa and New York City singer-songwriter Willie Nile, both of whom Byrd has known for four decades. The guitar-driven delights include the glammy stomper “Together” (featuring Blackhearts drummer Thommy Price), the mando-guitar-soaked gratitude track “Hear My Song” and the Georgia Satellites-flavored shuffle “Tired.” One of the album’s many highlights is a rollicking cover of the Merle Haggard classic “The Bottle Let Me Down” featuring the kind of accompaniment that would put a smile on the face of late Chuck Berry pianist Johnnie Johnson. Equally resonant is the melancholy acoustic number “Pour Me,” a nod to a Harold Arlen/Johnny Mercer standard.

“‘Pour Me’ is my version of ‘One for My Baby (One More for the Road),’” Byrd explained. “People tell me, including Dion, that you can picture the guy sitting at the bar—glass in hand, getting his answers from the bottom of a bottle. I’m proud of the stuff man. I also think I’m getting better as I write each one of these songs. I’m getting more precise and to the point.”

Byrd’s addictions began as a shy, self-described “left-of-center 13-year-old” smoking his first joint. Eighteen years later, he was experiencing a heady amount of fame and fortune as a member of Joan Jett’s Blackhearts. During this period in 1983, he collapsed a lung while smoking cocaine, which he later found out, left him an hour away from having a massive heart attack. It wouldn’t be until Sept. 25, 1987 that Byrd hit rock bottom.
“I was standing in front of the mirror, my nose was bleeding and my heart is beating out of my chest, he recalls, “I’m drunk off Jack Daniels and high from this, that and the other thing. And I was rifling through the medicine cabinet, as I would normally do, looking for cold pills to bring my heart rate down. I literally picked up the phone and called this person. She said there was a community support meeting at four o’clock the next day and she wanted to know if I could make it. I said yes. The preface to this was at the age of 30, I said I was going to stop. From 30 to 31 was the worst year of my life for that, because that was when I finally took a hard look and saw that I couldn’t stop. I have my diary from that year and I would write that I wasn’t going to get high on that day and then I’d say I was starting that night. It went on all year until I surrendered and hit it. Luckily for me, it’s been continuous for 33-plus years.”

A solo artist since striking out on his own in 1991, Byrd’s recovery troubadour journey began when he was asked to play fundraising events at a number of rehabilitation centers. It wasn’t until 2012 when he played at Boston’s Right Turn, a treatment center founded by Del Fuegos drummer Woody Giessmann, that the future drug and alcohol counselor got the idea to fuse rock and roll with helping addicts.
“Every time I’d do one of these events, I’d be lingering around backstage or off to the side after the show and people would come over and say they grew up on my music, thought it was cool that I was doing this and they were in,” Byrd explained. “It kept happening and people wanted to know where they could get these songs because they felt like I was singing their story. Before long, I started to get this message in my brain about combining two things—helping people and playing some rock and roll at the same time.”
Ideas became action and with 200 hours as a counselor in training under his belt, the guitar-playing recovery coach envisions a tour bus that says, “Have Recovery, Will Travel” and traversing the country via events that spread the word on awareness, prevention and education.

For Byrd, public awareness and prevention are the first steps in fighting this addiction pandemic. Equally key components are improving access and options for treating substance disorders. But he acknowledges, it’s an uphill battle given the shame addiction has attached to it.
“Supporting recovery while reducing the stigma is a huge problem,” he said. “If you do a fundraiser for cancer or diabetes, people come running. But when you start talking about addiction, a big portion of society thinks it’s a choice and you’ve done it to yourself. It’s our job to get out there and try to reduce the stigma. People like me are boots on the ground trying to talk to one person with substance disorder at a time. We’re trying to change minds and save lives. That’s what I do.”

Visit www.rickybyrd.com to purchase a copy of Sobering Times.