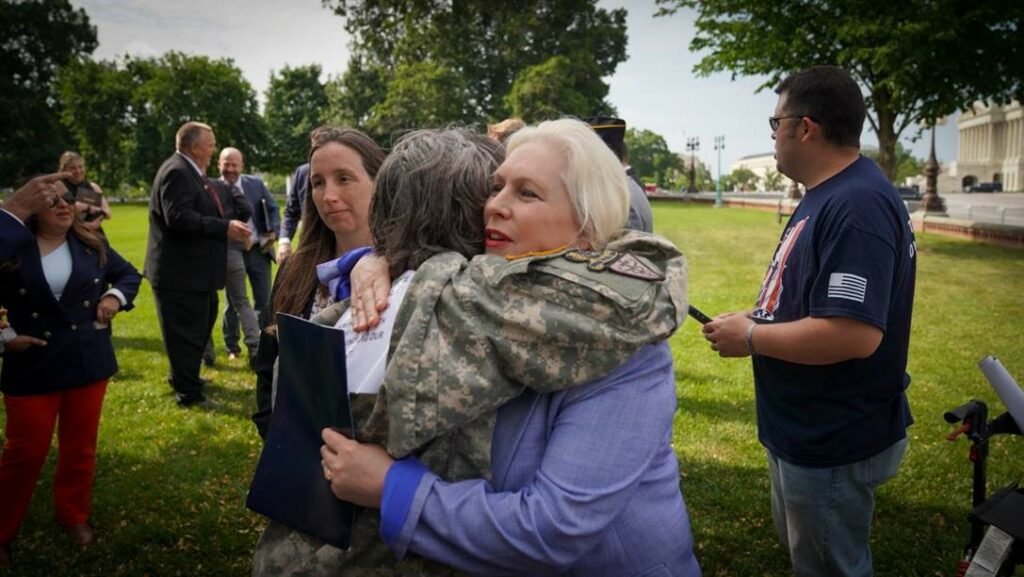 “Our service members and their families give everything for our country. And as a nation we promise to care for them when they come home. At last, we are honoring that promise and paying the price we owe them for our freedoms, our values, and our safety.

Today’s Senate passage of the Sergeant First Class Heath Robinson Honoring Our PACT Act is an enormous victory for the service members, veterans, and their families who have been fighting for years to get the health care and benefits they have earned. By establishing a presumptive service connection for veterans exposed to burn pits and other toxins, this legislation will finally ensure our nation’s finest will no longer be forced to jump through unnecessary hoops or carry the burden of toxic exposure alone.

I am proud that my bill, the Presumptive Benefits for War Fighters Exposed to Burn Pits and Other Toxins Act, formed the centerpiece of this bill and I am grateful to Majority Leader Schumer, Senator Rubio, Congressman Ruiz, Chairman Tester, and Ranking Member Moran, as well as the veterans service organizations, Jon Stewart, and John Feal, and all who have fought tirelessly on behalf of those exposed to toxic burn pits.”

Gillibrand first introduced the Presumptive Benefits for War Fighters Exposed to Burn Pits and Other Toxins Act in September 2020, alongside a bicameral group that included Representative Raul Ruiz (D-CA), comedian Jon Stewart, activist John Feal, and a strong coalition of veterans service organizations. The group introduced an updated, bipartisan version in the spring of 2021 together with Senator Marco Rubio (R-FL) and Representative Brian Fitzpatrick (R-PA).

In March 2022, the House of Representatives passed the Honoring Our PACT Act, an effort led by House Veterans’ Affairs Committee Chairman Mark Takano and Gillibrand’s House co-lead, Congressman Raul Ruiz. The War Fighters bill was included in the Honoring Our PACT Act as the centerpiece of the presumptive coverage section. Also in March, Gillibrand held a hearing in her role as chair of the Senate Armed Services Personnel Subcommittee to examine the health effects of burn pits. Later that month, Majority Leader Chuck Schumer joined the coalition to announce his support for the bill and pledged to give it a vote in the Senate.

In May 2022, Senate Veterans’ Affairs Committee Chairman Jon Tester and Ranking Member Jerry Moran announced a bipartisan deal on toxic exposure legislation. Their package, the Sergeant First Class Heath Robinson Honoring Our Promise to Address Comprehensive Toxics (PACT) Act of 2022, is an amended version of the House-passed Honoring Our PACT Act and retains Gillibrand’s bill as the cornerstone of the presumptive care section.