Sell Your House And Travel: A Nomadic Grandmother Tells Her Story 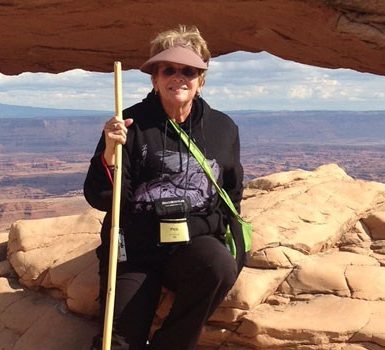 According to AARP, 37 percent of travelers over 45 have tried going solo. Solo travel is on the rise for baby boomers and beyond, especially for solo female travelers. But women who are considering traveling on their own may need a little extra encouragement; research shows that over 20 percent of women are hesitant to travel solo versus only 7 percent of male travelers.

Peggy Johnston’s husband died unexpectedly in 2007, just two months after her retirement. She was thrust into the biggest transition period of her life, but she didn’t lock the door and throw away the key. Peggy saw this as an opportunity to begin a new journey—on her own. “After my husband died, I knew that I wanted and needed to start a new life,” she said. “I was retired, my adult children had their own lives, and I wanted to learn more about other places and cultures.”

But just like many female solo travelers, Peggy needed a little push. One day in 2009, she received an invitation to join Road Scholar’s safari in South Africa, a destination that had always been at the top of her list. “It fell into my lap, and it was a dream of mine,” said Peggy. “I didn’t even take a breath. I signed up immediately.”

Not only did Peggy sign up for this life-list trip, but she committed to a life of exploration by selling her home. “That somewhat impulsive decision transformed my life, and I’ve been a nomad ever since.”

Today, Peggy Johnston, 65, has been on more than 20 Road Scholar programs, nine of them as a solo traveler.

Although her family was skeptical, Peggy wasn’t afraid of making this epic life change.

“The reason I’m not personally afraid of traveling on my own is because of what started me on this journey. When my husband passed away, that was a life-changing event. I promised myself that I would never ever let fear stop me from experiencing life.”

Not only is Peggy a trailblazer in this new wave of female solo travelers, she is also passing that love of learning and travel down to the next generations. Last year, Peggy went on her first Road Scholar family adventure to the Grand Canyon with her daughter, 10-year-old granddaughter and her granddaughter’s other grandmother.

For boomer women who are hesitant to enroll in their first solo trip, Peggy suggests starting small. “Do something close to home that doesn’t last very long,” said Peggy. “And then push the envelope, just a little bit.”

A good way to ease into traveling on your own is to go with a group of travelers who share your same interests. For Peggy, she was looking to learn, and that’s why she decided to launch her new journey with Road Scholar. “Road Scholar is not a tour company; it’s a university of the world,” said Peggy.

Peggy said that one of the things she likes most about traveling solo with Road Scholar is that she makes new friends along the way. “As a solo woman traveler, the Road Scholar experience is inclusive,” she said. “I find that Road Scholars are more welcoming to new experiences and new people.”

She also said that traveling with a group like Road Scholar lets you relax and enjoy your experience, while local experts introduce you to the best things to do in a new place.

“International travel, especially where I don’t speak the language, is something I would not consider doing with anyone else but Road Scholar. You miss too much! Even if it’s a place in the United States, like Chicago, you spend half the time figuring out what you want to do next. But Road Scholar gets you into the essence immediately.”

Her last piece of advice? “Don’t let fear woo you. We’ve all got to go sometime, so you might as well make the most of it.”