Most music you hear at a bar/bat mitzvah, Sweet 16 or graduation party is the usual mix of standard party fare (Kool and the Gang’s “Celebration” anyone?) or more contemporary pop like Katie Perry, Miley Cyrus or Justin Bieber. But what to do if your teen has musical tastes that lean more towards Led Zeppelin, the Beatles or Rolling Stones? Rockmitzvah would be the answer to this dilemma. Founded by four partners who all happen to be world-renowned rock musicians (Marc Jacoby, Clifford Mays, Jim Weingast, Jeff Reich), the Westchester-based quartet has been offering its services since 2007.

“[Rockmitzvah] is like School of Rock meets your [teen-driven event]. It’s for kids not looking to do the traditional DJ-driven, MTV Spring Break dance frenzy. It’s more for kids that are musical. We get them up to be the star at their own party and have their friends come up and play music with them,” Weingast explained. “It came about when one of our guys was on Craigslist and he found somebody looking for a ‘real rock band so their son could sit in and play Led Zeppelin at their own bar mitzvah party.’ We’re all working musicians and play in all kinds of different bands and do all sorts of different things and Zeppelin is certainly right up our alley and it sounded like fun.”

At the time, the Rockmitzvah members were the backup band for The Dude of Life, a lyricist who has worked extensively with Phish in addition to being a solo artist. After the parents came down to the rehearsal and liked what they saw, Weingast and company were invited to play at their son’s bar mitzvah, with the Dude making a rare appearance at an early Rockmitzvah event. Since then, the partners have performed at nearly 150 bar/bat mitzvahs in that time. And that doesn’t take into account the band’s sideline as the Blue Roadhouse Orchestra (BRO), which is often hired to play non-bar mitvah/Jewish events. With the principal players having more than a century’s worth of musical experience under their collective belts, flexibility is a key component of what they do. At any given time, Rockmitzvah has access to an additional 20 to 25 professional musicians, should there be a need for a horn section, female and male vocalists or percussionists. This versatility is particularly crucial when working with kids whose love of music may not be in the classic rock vein or may have some trepidation about doing anything different from what their friends might be doing at their events. 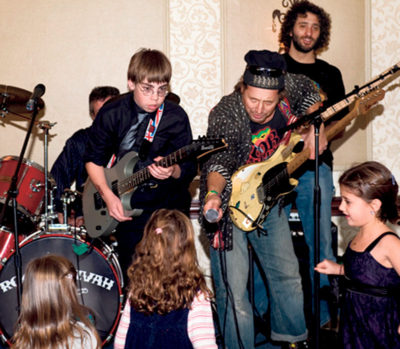 “When we first started, we were doing the Rolling Stones, Led Zeppelin, Green Day and the Foo Fighters but more and more kids are getting further and further away from that,” Weingast pointed out. “So in more recent years, we’re more open to doing whatever makes them happy. If it’s a girl that’s really into Broadway, we’ll do something from Rent and we’ve done songs from Wicked. We’ve done Broadway-themed bat mitzvahs where we get a bunch of girls to get up and sing Broadway tunes. We don’t necessarily want to perform as a pop band because we really are sort of a rock band in our core, but we can play pop songs. If you and a bunch of friends are going to get up and sing a Katy Perry song, we’ll play it for you. We’ve done ‘Counting Stars’ by One Republic, Daft Punk’s ‘Get Lucky’ ‘Radioactive’ by Imagine Dragons. But we’re always looking for those kids that really want to play AC/DC, Metallica or Led Zeppelin—all of that stuff comes naturally to us.”

The Rockmitzvah hiring process is pretty straightforward with the most important question being whether or not the day’s honoree has a love and passion for music. From there, the boy or girl, along with their family, is invited down to a rehearsal to get a first-hand feel for the band, Once Rockmitzvah is booked, a point person from the band is assigned to the family and a checklist with questions is sent over to be filled out. Queries pertain to all the components the band has seen at modern bar/bat mitzvahs: Is there a candle lighting? Is there a montage? Sit-down dinner or buffet? Are there other services? And on the musical side of things: What music is your child currently playing? What are some songs that they know and love to play? What friends do they have who might play instruments and which ones do they play?

Once this is all mapped out, a rehearsal is held a week or two before the party where the child gets to jam with the band on songs worked out with their point person. A list of friends who are musical are also provided with the idea being that during the cocktail hour, those guests will be sought out to fill in additional pieces of the set list. They’ll be brought over to the side of the stage and see what songs they have in common with the band. If need be, Rockmitzvah has a list of tunes that are easy to learn in the span of two or three minutes. In the process, Rockmitzvah helps create the flow of the party thanks to this list of what’s going to happen throughout the entire event.

With this time of life being such an important milestone in the Jewish religion, Weingast feels Rockmitzvah is playing directly into the day’s significance despite the unorthodox nature of the music being played.

“The thing that really sets us apart is that it really has a little bit more to do with the meaning of the day. For me personally, I find that to a certain degree, many of these parties have taken on a circus-like atmosphere with [much of the focus being on the partying],” he explained. “We feel this is a way for kids to get up and showcase a talent of theirs in front of their friends and families as well. They get up and rock out with the band and it’s still about them. The focus is on them and something that they have accomplished and that [it’s much more] than how many dancers, games and booths [are at the event].”