You would think in an entertainment career spanning 70-plus years, someone would have had the bright idea of shooting a documentary about the indefatigable Rita Moreno. After all, she is in the rarefied EGOT class of having won all four major entertainment awards—Emmy, Grammy, Oscar, Tony (although she gently reminded me that she was actually a KEGOT, having received a Kennedy Center Honor in 2015). She is also one of only 24 people who nailed the Triple Crown of Acting with individual Academy, Emmy and Tony Awards.

It turns out that she and Helen Hayes are the only two who have achieved both EGOT and the Triple Crown. In addition, Moreno received the 2004 Presidential Medal of Freedom (the country’s highest civilian honor) and was awarded the Peabody Career Achievement Award in 2019. Her filmography found her appearing in a slew of Hollywood classics including 1952’s Singin’ In the Rain, 1956’s The King and I and most famously, 1961’s West Side Story, where she became the first Latina to win an Oscar for her role as Anita.

All the doors she kicked down for Latinos like Lin-Manuel Miranda and down in television, film and stage even led to the Hispanic Organization of Latin actresses (HOLA) renaming their highest honor the HOLA Rita Moreno Award for Excellence back in 2000. So imagine how surprised Brent Miller, a producer on the Latino-flavored Netflix reboot of One Day At a Time, where Moreno was playing the matriarch Lydia Margarita del Carmen Inclán Maribona Leyte-Vidal de Riera, was when he approached the octagenarian actress about being the subject of a documentary.

And while any other person with these accomplishments might jump at the chance, it wasn’t something the ever-humble Moreno ever considered.
“Brent came to me and asked if anyone had come to me and asked about doing a documentary and I said no,” she explained with a laugh.”He just stared at me and said, ‘Never?’ I said no and why would anybody ask me? He said, ‘Why would anybody ask you? With the life you’ve led.’ And I said, ‘What life have I led?’ Really, I said things like that because when you live your life it’s not something you think of that could even end up being a community service to people at large. You don’t think of that. You can tell by the documentary that I’m not a person who is affected. There is nothing about me that is pretend. He asked me if I’d like to do one and I really wasn’t sure. I honestly didn’t believe I would be that interesting.” 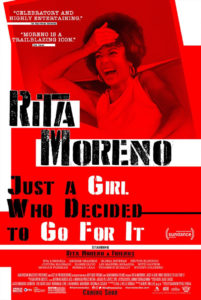 Even after that initial conversation, Moreno wasn’t keen on embarking on a project like this, despite being someone who self-admittedly loves the attention being a performer gives her. (“Any actor that tells you that they don’t appreciate attention is a liar.”) A year passed before she signed off on being the subject of Rita Moreno: Just a Girl Who Decided to Go For It, the latest installment of PBS’ American Masters Series set to get its exclusive U.S. broadcast premiere on Oct. 5 in honor of Hispanic Heritage Month.

Adding juice to the proceedings are executive producers Norman Lear and the aforementioned Miranda, both who are among the interviewees that include Hector Elizondo, Gloria Estefan, Morgan Freeman, Mitzi Gaynor, Whoopi Goldberg, Eva Longoria, Justina Machado, Terrence McNally and others.

But before she took the plunge, the Puerto Rican native had some conditions. It had to be directed by a female director and it had to be honest. The first proviso was achieved when Mariem Pérez Riera, whose son Marcel Ruiz, played Moreno’s grandson Alejandro on One Day At a Time, filled the director’s chair. As for the latter condition, this 90-minute documentary is unfailingly and brutally honest in a tone set by its subject and one not dissimilar to that found in Moreno’s 2011 autobiography Rita Moreno: A Memoir. The major takeaway for the documentary is that it’s a project Moreno absolutely felt had to be done given the times.

“What happened is something that hadn’t really crossed my mind or that of the director is how relevant this documentary is,” she said. “It is so connected to right now and in a terrible way, because things have changed and they have not changed. That is what is so maddening.” 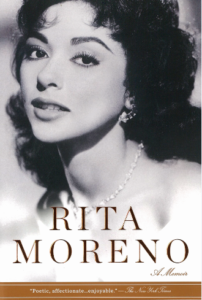 Like the book, Just a Girl traces Moreno’s idyllic early years growing up poor in the rural environs of Humacao, Puerto Rico with her seamstress mother Rosa María and little brother Francisco. It was here the future film star was known as Rosita and first found a love of performing for her maternal grandfather Justino.
“That’s really what started it—the fact that my abuelito used to play records and say, ‘Rosita, do something,’” Moreno recalled. “I’d start swishing my little booty around and dancing. He would applaud and laugh and I thought, ‘I like this a lot.’ I loved the attention it got me.”

When she was five, little Rosita wound up hopping on a ship with her mother headed to New York City and leaving her brother behind. She’d never see him again. Arriving in 1936 in the dead of winter, mother and daughter endured not only seasonal contrast, but that of being the other in a world where Puerto Ricans were looked down on. Growing up in the Bronx, Washington Heights and a brief stint in the then-rural Long Island community of Valley Stream, it was a pattern Moreno would continue to experience, even after she made her Broadway debut at age 12 in a production called Skydrift.

And while Just a Girl could have easily gone down the hagiographic path of scrappy Latina fights and scrapes her way into a happy ending, it is unsparing in reflecting the tremendous trauma, emotional pain and horrific episodes she endured that led to a suicide attempt and significant therapy. Pérez Riera used an animated paper doll as a major narrative device throughout the documentary to reflect the insecurity of Little Rosita in a way the older Rita Moreno carried through much of her adult life. It was a creative stroke Moreno adored.
“This beautiful concept of the paper doll being little Rosita—that is so winning,” Moreno said. “I just love what she did with it by politicizing it in a very interesting and good way. She brought in academic women to talk about and clarify the kind of life I was living because of the times. That was brilliant and I think that’s what makes the documentary really important and relevant. In the final analysis, it’s not about me or the celebrities that are in it so much as it is what the academic women say about those times. That alone, made it into a completely different and original kind of biographical documentary.”

The move to Hollywood with her mother exposed Moreno to many more indignities, where she sexual objectification was a constant. Also disturbing were the casting choices Moreno’s studio handlers made for her, where as a person of color, she was thrown into ethnic roles that demanded she be Polynesian, Native American, Egyptian or Asian. It was a situation that took a significant toll on the young actress.
“When I came out to Hollywood, I went there under contract to MGM and that was a hard, hard, hard time,” she said. “I already didn’t feel so good about myself anyway because of my experiences in New York. It was a very different time. Whenever I wasn’t working, I’d be so sad and panicked. And then when I was working, I’d be thrilled for one day and then I’d look at the script and it would be an American Indian girl or some Lolita/Conchita part and then I would get sad again. It was just really difficult. All of that sent me into therapy years later and that’s the best thing I ever did for myself.”

The documentary also sheds light on Moreno’s personal life, touching on the dysfunctional relationship she had with Marlon Brando that included an abortion and a suicide attempt. And her 45-year-marriage to cardiologist and former manager Leonard Gordon, a union that yielded daughter Fernanda Gordon Fisher and two grandsons. While the relationship is portrayed in the documentary as being loving via sunny memories and a clip of Moreno discussing her 19th anniversary with Joan Rivers on The Tonight Show, Moreno followed up that footage by saying, “We were really not a good couple.” It’s a shocking revelation and one of the most honest responses that was undoubtedly a difficult conversation to have, particularly given how close she is with her daughter.

“It was not something I wanted to burden [Fernanda] with because what are you going to do about it?,” Moreno said. “What was I going to say? ‘Your father is impossible. He tries to control me.’ What is she going to do about that except feel terrible because she was a real daddy’s girl? He was a very loving and thoughtful parent and grandparent to the boys. So I had to keep it to myself. But it was really hard. After he passed away, we started to talk. It always bothered me that he didn’t like that part of me he found to be kind of a little crass and vulgar. I love that it also connotes other things. We’re warm and giving people. We are all of those things as well. That’s part of my Hispanic nature. It’s absolutely so that I was all of those things. But I sure loved life. That was never a question.”

American Masters—Rita Moreno: Just a Girl Who Decided to Go For It debuted on Oct. 5 and is available for streaming concurrent with broadcast on all station-branded PBS platforms.