Ramen, the noodle soup consumed in mass quantities during college years—and these somehow still financially lean adult years—is a culinary curiosity. It exists as both a basic, bargain bin dinner and a versatile, deeply flavored menu item all at once. It’s food fit for every rung on society’s ladder.

But rather than delve into a restaurant’s version of ramen loaded with high-end ingredients, true satisfaction lies in slurping through a bowl of your own creation—always starting with Maruchan, the crown jewel of packaged noodle soups.

Opening the Maruchan packaging, you are greeted by a block of dried noodles and a packet of chicken “flavor.” Throw that death-by-sodium packet into the trash immediately, it is of no help where you’re going. Instead, opt to create your own spice combination using whatever has been sitting in the kitchen cabinet for as long as you can remember.

Start with salt and pepper, then grab the onion and garlic powders. There’s probably poultry seasoning in there; grab that, too. Do you have a chicken-flavored bouillon cube? If so, crush it and add it to the mix. Combine all those seasonings, measured with your eyes and instinct, in a small bowl and set aside. 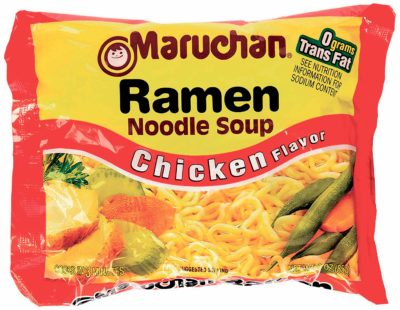 Bring at least two cups of ice cold water to a boil. Here’s where the fun begins. Stir in a teaspoon of peanut butter and a sustained squirt of sriracha chili sauce. The combination creates a Thai-chili-peanut aura throughout the soup.

All top ramen recipes include some form of protein—this could be any leftover meat nearing its expiration date in your refrigerator, including one of those supermarket rotisserie chickens. Tear off chunks of chicken—including skin, fat, tendons and bone for flavor—and toss into the boiling water along with your spice mix.

Other great options for ramen protein include bacon (fully cooked before added to the mix), sliced hot dogs and any type of sausage, cold cuts, shrimp and just about any frozen vegetable taking up space in the freezer. Even the bone of a leftover steak can be utilized here—the grizzle and fat brings another layer of unctuous flavor—dogs don’t deserve all bones. A good rule of thumb is to fry your protein in a skillet with butter before adding it to the boiling water. Frying begets browning and browning begets flavor. When a sufficient coating of crispy color forms on the surface of the protein, slide it into the boiling water, along with butter drippings from the frying pan.

After allowing your chosen ingredients to boil together for about five minutes, add the dried noodles. Now, you must work quickly to not overcook the noodles. About 30 seconds after dropping in the noodles, crack an egg into the mixture and cover with a lid, letting the concoction boil at a high intensity for about one minute. Then, turn off the heat and let sit, still covered with the lid, for a minute to a minute-and-a-half. This keeps the yolk runny while cooking the egg whites. But even if the egg whites are left a tad raw, they will cook to a safe level while resting in the hot pot concoction.

Find a bowl—a big bowl—and pour in the entire creation. Find the yolk, break it and mix it up so that the egg yolk becomes one with the broth. Garnish, if you’re into that sort of thing, with chopped green onions and a generous squeeze of sriracha. Grab a spoon, and chopsticks procured from Chinese takeout weeks earlier, and eat with your face directly over the steaming bowl—this is an especially important step during the dreary post-holiday winter days.

Slurp away and dream up tomorrow’s ramen vision quest.