Racing For The FDNY

Few NASCAR teams are relaxed on a race weekend. The hours upon hours of preparing a racecar take a mental and physical toll on those working to succeed come race time.
However, there is one group that shows up on occasion, aiming to have fun and does so for a cause. Jim Rosenblum, who had been fielding an entry in what was known as the NASCAR Craftsman Truck Series since 1995, wanted to do something special to remember the lives of those who perished in the September 11, 2001 terrorist attacks.

A New Yorker himself, Rosenblum has always been surrounded by first responders. He lives in Mamaroneck, a calm area in the midst of Westchester County. But in 2001, Jim Rosenblum Racing, which only ran a handful of races from 1996 to 2000, was renamed to FDNY Racing.

FDNY Racing, to this day, consists of NYPD and FDNY servicemen, heroes away from the track. Every few months, truck No. 28 shows up to the racetrack in the red and white colors of the FDNY fire trucks, quite the moving tribute for those in the busy life of motor sports. 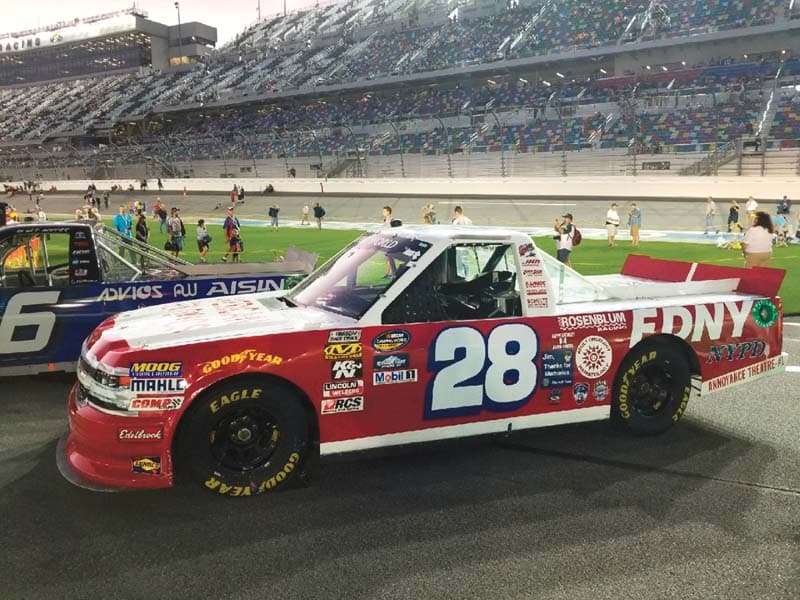 “Without Jim Rosenblum, I never would’ve gotten as many opportunities as I did in my career,” Ryan Ellis, who drove for FDNY Racing from 2014-16, said. “He took a chance on me when I was very new to the sport and together we created some really good memories together. Some of the most fun times I ever had in the sport were with the FDNY racing crew and family. They’re one of a kind and just go to the track to have fun. I’m forever thankful for Jim and everyone involved.”

In Feburary of 2016, Farmingdale’s Mark and Rosanne Knight were watching a Truck Series race, the first of the year at Daytona International Speedway. FDNY Racing traditionally attempts to qualify for this contest, being the most popular on the schedule. The red and white truck, with Ellis driving, caught their attention.

One thing led to another and the Knight family tracked down Rosenblum. They wanted to help with their own creation, Draf10 Motorsports.

“I said, ‘Hi, can I speak to Jim Rosenblum?’” Mark Knight recalled. “He said to hold on. He comes back a couple of seconds later and says, ‘That’s what it says on my driver’s license.’ I told him what we’re trying to do. They were racing at Charlotte that spring, so we went on board as a sponsor to meet the team.”

From there, the pairing worked. But the team is volunteer-based, with the money leftover from expenses going to support surviving first responders. In 2019, they’ve only been to two races—Daytona and the nearby Pocono Raceway in July—but didn’t finish on the lead lap in either event.

But that’s not what matters for anyone involved in FDNY Racing. The cause is much greater than the finishing result.

The Knight duo has lofty goals for this team, though.

In January of 2018, rumors emerged that FDNY Racing would shut down after the first race of the year at Daytona. It wasn’t a surprise given they only show up to a handful of races and the high cost of putting together money for even one race. But that led to Daytona becoming an emotional weekend, with different drivers sharing stories about Rosenblum and the rest of the FDNY team.

Lo and behold, Rosenblum’s FDNY squad returned to Talladega Superspeedway in October. Not only did that team show up, but thanks to a new Ilmor motor that levels out the field between the teams with millions of dollars in funding and ones like FDNY Racing, Dauzat roared through the field. He finished eighth that day, the only top-10 finish FDNY Racing has ever recorded in 56 Truck Series races.

Now, Knight wants to bring this team to the next level, giving Rosenblum a chance to see what it’s capable of, all while keeping the mission of FDNY Racing going.

“We asked Jim if we can start pursuing sponsorship and helping out,” Knight said. “We want to make it a full-time team. We’ve made good connections inside NASCAR.”

The volunteers from FDNY Racing will continue to work on the trucks should the team get sponsorship to go full-time racing. They’ll set up the trucks, while a pit crew from the NASCAR Drive for Diversity program will service the No. 28 entry during races to perform those intense 14-second pit stops.

“To win a race would be the pinnacle,” Knight said. “It’s not about winning races for Jim. He’s about let’s have fun and let the chips fall where they’re going to. I hope we can be a competitive team. We want to enhance the team, but keep the foundation that started it.”