County Executive Laura Curran presented a proclamation to Alzheimer’s Association representatives during a recent ceremony to draw attention to the impact of Alzheimer’s disease and other dementias on Long Island families and caregivers. Last week, the dome of the Theodore Roosevelt Executive and Legislative Building in Mineola turned purple in honor of Alzheimer’s & Brain Awareness Month.

Simply by having a brain, every person in Nassau County is at risk for developing Alzheimer’s, a fatal disease that cannot be prevented, treated or even slowed. There are 5.7 million Americans living with Alzheimer’s disease, including 400,000 in New York State. By 2050 that number is projected to reach as many as 14 million. That is why it’s important to take action now to help end this epidemic. 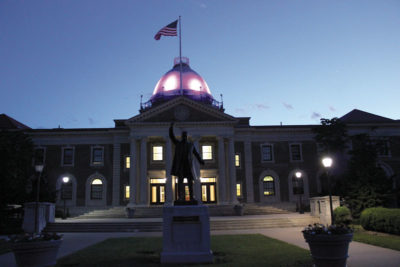 During June, the Alzheimer’s Association is participating in social media campaigns, events and fundraisers to raise awareness about the disease. The association invites people to share photos and stories on social media using the hashtag #EndAlzheimers. Twitter will post a custom emoji each time the hashtag is used. Facebook has added a profile photo frame that can be added to existing profiles that reads: I go purple to END ALZ.

—Submitted by Ann Healey,
communications manager for the Alzheimer’s Association