Have you ever wondered what baseball was like in the old days? Old Bethpage Village Restoration gives fans of America’s favorite pastime the chance to see what base ball (spelled that way in the 1800s) was like back then as teams from the 1864 League play the game following the rules and customs of the 19th century in vintage uniforms.

The original Mutual Base Ball Club began in 1857 and was named after Mutual Hook and Ladder Company Number 1. Players consisted of city employees who traveled to Brooklyn, Hoboken, Hartford and Boston for games.

Some of the rules back in 1864 included pitching in an underhand manner delivered below the waist; home plate was round; foul balls were not strikes, the striker (batter) would receive a warning before the umpire would call fair pitches and then he would receive three strikes and any reachable ball was a good one. Also, uniforms consisted of a hat, long pants and a bib type shirt.

Not without the issues of modern day baseball, the Mutuals also faced expulsions, debated championship wins, triple plays, loose cannon players and betting money on the game. The original club lasted until 1876, with the Mutuals finishing their season 21-35.

As for the 2016 team, which represents the 1870 National Champion Mutuals by wearing replicas of the actual uniforms worn by that team, the goal is to educate the public about the roots of old time base ball. The current club was established in 1999 as an extension of the Old Time Base Ball program at the restoration. The Mutuals travel across the country, playing established teams as well as instructing new players on how the game was played. They play home games at Old Bethpage Village Restoration. 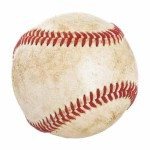 The Mutuals next home game will be on October 15, where the team will play at the MAVBBL Festival. Prior to that, they will also play Sept. 24, 25, Oct. 1, 2 and 8 at Old Bethpage Village Restoration.

For more information and a schedule on upcoming games for Old Time Base Ball, visit www.nymutuals.com.