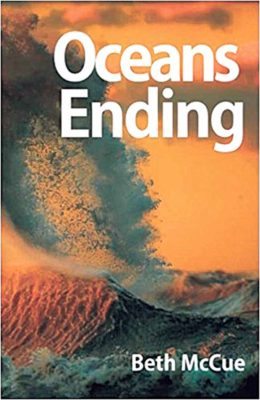 Between genetically modified crops (GMOs) and cloning, genetic engineering is the one branch of science that has seemingly experienced the most growth and generated quite a bit of controversy. So it goes with Beth McCue’s new novel Oceans Ending, a 213-page science fiction thriller having to do with the ethics behind toying with sea life DNA while mashing it up with human subjects.

Protagonist Dana Barnes-Thompson is an artist who is in a loving marriage with her therapist-turned-spouse Elliot. While she has a strained relationship with her law enforcement father, it isn’t until a voracious strain of jellyfish starts attacking unsuspecting swimmers that numerous family secrets begin to become unveiled.

It turns out that Barnes-Thompson’s father-in-law Bill happens to be a geneticist working for the government who is attempting to hybridize jellyfish and human DNA. Using his future daughter-in-law as a guinea pig, Bill’s scientific dabbling inadvertently winds up having her create a psychic link with the mutant jellyfish amid the disastrous results that came out. And while one of the byproducts is massive carnage caused by these deep sea denizens, the overarching theme is not unlike the one Mary Shelley invoked in 1818’s Frankenstein (or The Modern Prometheus)—nothing good can come from man’s attempt to play God.

McCue’s writing keeps the action going along at a fairly brisk clip, with chapters being tight and compact. While the relationships between characters occasionally get muddled due to the fluidity of the back-story and the amount of people that are involved in the overarching story, McCue does a solid job describing the jagged emotions displayed as each layer of this scientific onion gets peeled back. The intertwining of government operatives and the top secrecy involved with a fictional project like this also infuses a bit of espionage intrigue into the proceedings that helps the narrative continue to chug along steadily.

Oceans Ending may refer to the fictional New Jersey seaside community where Barnes-Thompson lives with her husband, but it also serves as an environmental warning, particularly when the outcome of unethical scientific experimentation winds up yielding quite a scary and foreboding unknown.