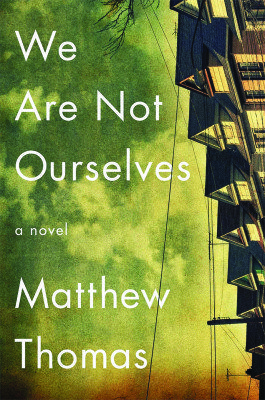 The Friends of the Manhasset Public Library have again recruited a critically-acclaimed and best-selling author to be the keynote speaker at one of the group’s fundraisers.

Matthew Thomas, author of the 2014 novel, We Are Not Ourselves (Simon & Schuster), will be the featured attraction on Wednesday, April 13, at 7:30 p.m., at an event benefiting the nonprofit organization whose mission is to raise funds for the Manhasset Public Library beyond what is included in its operating budget.
Nearly two years after its 2014 publication, Thomas’ work received an additional wave of favorable publicity earlier this year when The New York Times’ Big City Book Club made it their January 2016 book selection.

“The Big City Book Club asked readers to suggest the best New York-centric books they read in 2015,” a Jan. 8, 2016, The New York Times article stated. “A few titles cropped up frequently, but the one repeated with the most enthusiasm was We Are Not Ourselves, by Matthew Thomas, a 2014 novel about a multigenerational Irish-American family in New York.”

Moreover, the Times’ book critic, Janet Maslin, called We Are Not Ourselves one of her 10 Favorite Books of the Year when it was first published in 2014. Rave reviews also appeared at that time in The Washington Post, Entertainment Weekly, and Publishers Weekly, among other publications.

Thomas, a former high school English teacher who resides in New York City with his wife and children, graduated from the University of Chicago. He also earned Master’s degrees from Johns Hopkins University and the University of California, Irvine. Despite the sites of his higher educational pursuits, Thomas has New York roots, having been born in the Bronx and raised in Queens. Eileen Tumulty, the book’s central character, is also a native of Queens. Born in 1941, and the daughter of Irish immigrants, Tumulty eventually attends nursing school and marries Ed Leary. They have a son, Connell, and move to Forest Hills from Woodside in the late 1960s and then to Westchester County, so many of the backdrops to this fictitious tale are familiar to a Nassau audience.

J.R. Moehringer, a Pulitzer Prize-winner who grew up in Manhasset, and Dorothea Benton Frank, a bestselling author who splits her time between New Jersey and South Carolina, were the guest speakers at Friends of Manhasset Public Library fundraisers in 2012 and 2014, respectively. Moehringer is perhaps best known for 2005’s Tender Bar, a nonfiction book which chronicled his formative years and the friends he made at Publicans (now Edison’s), a Plandome Road, Manhasset, tavern. Benton Frank’s The Hurricane Sisters, a novel, was published in 2014, and focused on the travails of the women in one family in South Carolina’s Lowcountry.

Tickets to see and hear Thomas when he appears at the Manhasset Public Library, 30 Onderdonk Ave., Manhasset, on April 13 are $15 per person. With each paid admission, ticket holders will also receive a copy of We Are Not Ourselves.

Thomas’ talk, and an audience question and answer session, will be held in the library’s community room. Seating for members of Friends of the Library begins at 7 p.m. Guest seating starts at 7:15 p.m.

Tickets can be purchased in advance via friendsofmanhassetlibrary@gmail.com or by calling Rosanne Vogel at 516-627-6428.