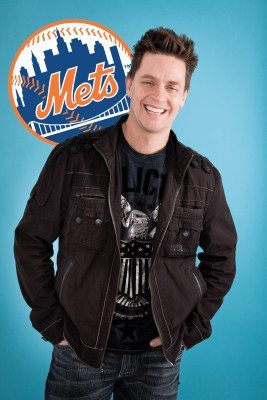 As the New York Mets shake off last year’s World Series defeat and gear up for the 2016 season, actor/comedian and die-hard Mets fan Jim Breuer believes the orange and blue faithful should anticipate years of competitive baseball—and they shouldn’t be shy about it.

“This team is the real deal. That dream everyone was talking about with the young pitchers, it’s real,” said Breuer, who recently wrapped up a two-night stay at The Paramount in Huntington. “I didn’t walk away last year sad or disappointed that they lost, my thought was, ‘wow, we are in it for the next four or five years.’”

Breuer shared the pain of losing the World Series with the rest of the Mets fan base through game recap videos he began posting on Facebook after an opening day win over the Washington Nationals. From that emblematic victory through the heart-breaking loss to the Kansas City Royals in Game 5 of the World Series, Mets fans connected with Breuer’s enthusiasm, criticism and post-game intensity.

“Being a Mets fan means having endurance and faith. It means loyalty—because being a Mets fan, you are not bound to win all the time, just like in life,” he said. “We stick to it through thick and thin. I see a Mets fan and I see a person who knows how to endure pain and work through it without giving up.”

And it was that brand of fandom that inspired Breuer to record his game-by-game reactions in the first place. In 2014, Breuer’s father passed away. Then six months later, his sister died. Two months following that, his wife was diagnosed with cancer for the second time—she was enduring chemotherapy when Opening Day 2015 rolled around.

“She was watching the first game of the season with me and of course she had no energy because of the treatment,” he said. “She’s smiling and laughing at me and I’m like, ‘what’s so funny?’ She tells me, ‘this is what you should be making videos of—as the die-hard Mets fan you are.’ Nobody shows this kind of passion—don’t be hokey, just be yourself.’”

After reviewing the sum total of the 2015 season, Breuer believes this team belongs with the league’s elite.

“Take the pain of losing the series, watch them get their rings and raise the banner on opening day, feel the fire in your belly and know that we are out for blood this year,” he said. “It is World Series or bust.”

Breuer breaks down the keys to a return trip to the series for the Mets:

“The pitching staff has to stay healthy. Be mean and be out for blood. If this staff comes out with swagger, they can shut down any team. They fear nobody. The Cubs were supposed to be this powerhouse hitting team—they looked goofy against our pitchers. This staff has so much confidence and if they keep it together and stay healthy, who knows, maybe we’ll have a no hitter or two this year.”

A Full Year of Yoenis

“If Cespedes is half the player he was when we got him last year, look out. When he is on, he dominates at the plate. He crushes it.”

“We don’t even know what we have in [Michael] Conforto yet. He looked great at times in the playoffs. We need him to be what we think he can be—that means 20 home runs and 85 RBI.”

“The infield defense cost this team a lot of games last year. I don’t think people realize the impact it had on this team. The defense this year has the potential to add 20-30 pitches a game to the starters. That’s huge. And I have a funny feeling about [Neil] Walker. He could surprise a lot of people. I think we’re gonna love this kid like we loved [Wally] Backman back in the day.”

“The best thing to happen to this team was [Jenrry] Mejia’s suspension. It gave us [Jeurys] Familia. He went out there with the bases loaded [in World Series Game 4] and threw a double-play ball that Murphy lost. And the next day, it happened again. He gave us everything we needed or wanted.”