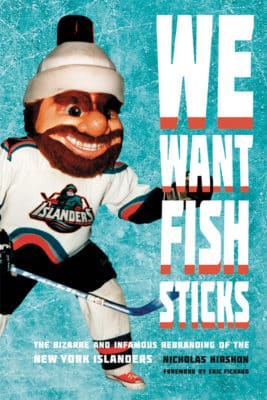 The New York Islanders are different. That’s always been the case. Among the many eyebrow-raising moves the Islanders have made over the years includes a marketing campaign gone awry in the mid-1990s. It’s one Nick Hirshon, a journalism professor at William Paterson University, felt so strongly about that he decided to write We Want Fish Sticks: The Bizarre and Infamous Rebranding of the New York Islanders.

“I saw people in Nassau Coliseum wearing the Fisherman jersey, but they weren’t wearing them on the ice anymore,” Hirshon said. “I just became curious about the history of the whole thing. A lot of people were reluctant to wear it.”

Reluctant they were. The Islanders debuted a new logo in 1995, attempting to get fans excited about a team that couldn’t do much on the ice a decade after winning four straight Stanley Cup titles.

The logo was certainly different: a fisherman with a hockey stick.

“This was a time in the mid-1990s when sports branding wasn’t really a sophisticated business yet,” Hirshon said. “It was just selling jerseys at games at Nassau Coliseum. They weren’t thinking about people wearing jerseys as a fashion statement.”

In the book, published by the University of Nebraska Press, Hirshon uncovers stories never told before about the Islanders, ones that will certainly bring nostalgia to fans across the island, like Nyisles, the awkward looking mascot who received a lot of hate right off the bat.

“Rob DiFiore, the first guy to play Nyisles, told me stories about how fans abused him, kicking and punching him,” he said. “They were either upset at the rebrand or forgot there’s someone inside the suit.”

People actually forgot—or wanted to forget—that the mascot was a person. DiFiore was only paid $75 a game. At one point, the Islanders were burning all bridges. Literally.

“The goal light on Nyisles’ helmet was charged by a motorcycle battery that he wore around his waist and fanny pack,” Hirshon said, still in a state of shock about it. “He was about to go out and greet fans when the motorcycle battery caught fire. He quickly had to shed this outfit.”

Hirshon’s book examines the life of about 53 people involved in the marketing campaign. The book, he said, does not attack the Islanders, but examines the misconceptions about the team’s rebrand.

The Islanders did not respond to a request for comment about the team’s official thoughts on the book.

“You can see more clearly where mistakes were made,” Patrick Calabria, an Islanders executive in the 1990s and current Farmingdale State College vice president for institutional advancement and enrollment, said. “You can see how certain reasons made things not work out.”

While Hirshon was hesitant to write the book, he made sure to have a delicate approach to it. While interviewing the Fisherman’s designers, he was transparent, telling them he wasn’t mocking them.

The book does the opposite, explaining to fans the process of a rebrand at a time when the Islanders needed to fill seats at the Coliseum. If the team wasn’t winning, they needed something to get people excited.

“Enough time has passed where you have perspective on it,” Calabria said. “It helped clear up misconceptions.”

The rebrand might have failed, but Hirshon’s book shows the true reasons as to why it happened.

“There was a lot of decision making behind it, even if it wasn’t the wisest,” he said.

Hirshon will be speaking at Farmingdale State University on Feb. 12 to discuss the book further.